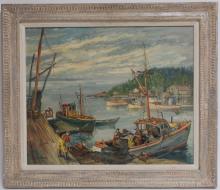 Description: George Baer, American, 1893 - 1971, Unloading Fishing Boats,c.1954, oil on masonite. Note: Biography George Baer was born on July 7, 1893, in Chicago, where his father, Leopold Baer, owned a photoengraving business. Both George and his better-known brother Martin (1894?1961) were encouraged by their father to become artists. After graduating from the Art Institute of Chicago, they opened Holbein Studios, later renamed Anarchist Studios, which closed in 1921. The Baers studied at the National Academy in Munich, Germany, and then proceeded to Paris, where they associated with the international circle of artists collectively known as the School of Paris. The brothers achieved recognition in 1926, when a group of paintings they had executed in Morocco and Algeria were exhibited at Durand-Ruel Gallery, Paris, and the Art Institute of Chicago. They returned to North Africa and produced a second series of paintings that were exhibited at the Galerie Jeune Peinture, Paris, in 1928, and then toured the United States. The Baer brothers, who worked in very similar styles, were deeply influenced by the Austrian expressionist Oskar Kokoschka (Austrian, 1886 - 1980), and also drew inspiration from such old masters as Jacopo Tintoretto (Venetian, 1518 or 1519 - 1594), El Greco (Greek, 1541 - 1614), and Lucas Cranach the Elder (German, 1472 - 1553). They never repeated the critical acclaim with which their North African subjects were received in the late 1920s. George Baer returned to his native country around 1932 and eventually settled in West Cornwall, Connecticut. He taught painting in a number of nearby towns in Connecticut before moving to Salisbury in 1946, where he taught at the Salisbury School for the next 21 years, opened an art school at the Scoville Memorial Library, and was active in the community's cultural affairs. 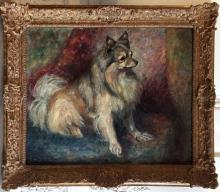 Description: George Baer, American, 1895-1971, Mill Reservoir, oil on canvas , signed lower right. Biography: George Baer was born in Chicago. He attended the Chicago Art Institute, and after graduation, he and his brother, Martin officially opened the Holbein Studios, later known as the Anarchist Studios. The studio closed in 1921, and the Baer brothers went to Munich, Germany attending the Academy and studying with M. Heymann. In 1924 they went to Paris, and studied at the Ecole des Beaux Arts. They met many important artists including Picasso, Soutine and Kremin. Until 1940, they were based in Paris while taking extended trips to Algeria, Spain, England, Belgium and Holland. They spent two years on the outskirts of the Sahara Desert in North Africa. The Baer brothers George and Martin found the Algerians as much to their artistic liking as Gauguin found the Tahitians. They looked upon them with a lively, leavening curiosity, and transferred them quivering to their canvases the dancing girls, swaying to barbaric music; the camel drivers, ready to start for their long journeys across the Sahara; street vendors, beggars, women of the African demi-monde. George had in the 1930?s having fled the Nazi invasion had moved to back to America to New Milford, CT. He taught Creative Design and Lettering in 1931 and 32 at the New York School of Applied Arts and Design for Women. In 1946 he settled in Litchfield County, Connecticut , opening an art school in Salisbury,Connecticut at the Scoville Memorial Library from 1933-38 where he taught painting, life drawing, watercolor, etching, pencil and all applied arts. Baer had instructed art to notable author Clyde Brion Davis and Thomas B.Costain. George was an art instructor at the Salisbury School for 21 years. George has a piece titled ?Masouba? at the National Gallery of Art in Washington, D.C. (ALMA10107)(MM)
Measurements: 22 x 30
Condition: Good
Property Title: From a Northeastern Collector... 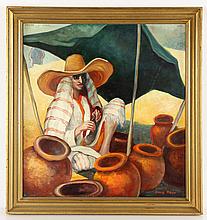 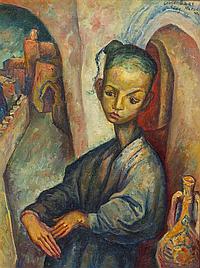