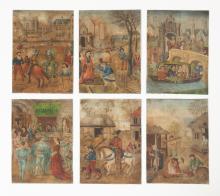 A dramatic miniature painted by Simon Bening, one of the greatest and most famous Netherlandish manuscript illuminators, from the intriguing Enriquez de Ribera prayerbook. Dismembered and its miniatures dispersed, the lost manuscript is recognised for its striking beauty and iconographical innovation: the present miniature depicts scenes from the Passion of Christ.

The original manuscript was most likely made for the Spanish nobleman Fadrique Enriquez de Ribera, Marquis of Tarifa (1476-1539). Count Paul Durrieu was the first to identify both armorials – of Enriquez and of Ribera – that appear in the borders of the extant leaves: these two great Sevillan families were only united for the first time through the marriages of Fadrique’s father, Pedro Enriquez de Quiñones, first to his aunt, Beatriz de Ribera, and, after her death, to Fadrique's mother, Catalina de Ribera. Of the male descendants to have borne the Enriquez and Ribera arms, Fadrique stands out as by far the most likely candidate to have commissioned such a manuscript: not only did he spend time in the Netherlands, becoming a Knight of the Golden Fleece in 1518, but he is known to have owned splendid books and manuscripts. The inventory of the c.260 items he added to the Tarifa library includes at least three costly prayerbooks in rich bindings (see María del Carmen Alvarez Márquez, ‘La Biblioteca de don Fadrique Enríquez de Ribera, I Marqués de Tarifa (1532)’, Historia. Instituciones. Documentos, no 13 (1986), pp.1-40).

(2) It is possible that the present leaf was formerly in the Ch. A. De Burlet collection in Berlin. 'Only three of the four miniatures owned by De Burlet were sold, when they were attributed to Simon Bening, in Eine Wiener Sammlung, Berlin, H. Ball and P. Graupe, 12 May 1930, Pt. II, pp. 10-11, nos 20-22, ills.' (see Hindman 1989, p.6, no 8). Judith Anne Testa (1991, p.89) mentions five miniatures from the 'Albert Figdor collection in Vienna', which are identical to the ones that Hindman identifies as the ex-De Burlet leaves.

Companion leaves:
The Enriquez de Ribera prayerbook must have been a unique devotional manuscript, made to order for Fadrique Enriquez de Ribera. It was likely very densely illustrated; the scenes depicted across the extant leaves are taken from Christ’s Ministry, Passion, Resurrection, Pentecost and beyond, and must have formed part of an unusually full cycle. Furthermore, many of these scenes are rarely illustrated in manuscript art – the depiction of the Rending of the Veil of the Temple (Sotheby’s, 6 July 2000, lot 35), or Joseph of Aramathea and Nicodemus on the way to Calvary in the present leaf are virtually unknown in Netherlandish art, not just rare in Ghent-Bruges illuminated manuscripts. The verso text is preserved for just one of the sister leaves: Lewis E M 6:1 at the Free Library of Philadelphia, a devotion in Spanish that is neither from a standard Book of Hours, nor is it related to those found in any Rosary Psalter produced by Bening and his shop. When the remnants of the manuscript are considered together, it is possible to imagine just how splendid and iconographically innovative a prayerbook this must have been.

Sixteen companion leaves (including cuttings) from the same manuscript are known; the present leaf is either the unidentified leaf formerly in the Ch.A. De Burlet collection (no 8 below), or a new addition to the group.

All leaves formerly in the possession of Paul Durrieu have been mounted on wood; for an extensive discussion see Hindman 1989 and Testa 1991.

Illumination:
The last of the great Netherlandish illuminators and the most widely renowned, Simon Bening was attracting high-status commissions almost immediately after receiving his mastership in Bruges in 1508, and worked for important patrons across Europe for the next half-century. Presumably trained in Ghent by his father, the illuminator Sanders Bening, Simon’s work drew upon a knowledge of his predecessors while developing his own style, which brought a...

Lot 1011: Simon Bening, circle of, The Arrest of Christ

Description: This work shows Christ being betrayed by the kiss of Judas and captured by Roman soldiers. In the background of the image we see the fence surrounding the garden of Gethsemane and a large rock formation. The tightly packed composition of half-length figures, closely placed landscape background and the head of Christ all display parallels to the work of the Flemish manuscript painter Simon Bening, indicating that this panel was probably originates from his circle....

Lot 6: FANTASTIC WATER TOURNAMENT, on a leaf from a Book of Hours, ILLUMINATED MANUSCRIPT ON VELLUM

Description: [Ghent, c.1500] 184 x 127mm (visible painted area). Initial D with acanthus-frond staves in ochre and liquid gold 'casting' a dark pink shadow on a lighter pink ground, full-page border of an aquatic battle between an armoured merman and a wildman mounted on a fantastic water-bird, swans swimming on the lake beyond them and birds flying above a landscape of wooded hills, 17 lines of text written in black ink in a gothic bookhand between two verticals and 18 horizontals ruled in pink, justification: 119 x 74mm, rubric in red, one-line initials in burnished gold on grounds and infills of blue and pink with white penwork decoration, similar initials and line-endings visible on verso (minor losses of pigment). Mounted, in a gilt wood frame. As signalled in the rubric, the leaf opens with the first of the Penitential Psalms and so formed part of a Book of Hours or prayerbook. The engaging border is attributable to the workshop of the Master of the Older Prayerbook of Maximilian, named from the manuscript made for the Emperor Maximilian, Vienna ™NB cod.1907. The Master was one of the leading figures in the so-called Ghent-Bruges School of illumination, collaborating with Gerard Horenbout and Simon Bening as well as the anonymous Master of the Prayerbooks of c.1500 and exerting such a formative influence on Simon Bening that he is plausibly identified as Simon's father, Alexander Bening. He apparently first used the design, around the opening of the Psalter of St Jerome, in the Hours of William, Lord Hastings, datable before his execution in 1483 (BL, Add. 54782, f.279, ill. in D. Turner, The Hastings Hours ). Clearly of great appeal, it reappears in some of the finest Netherlandish manuscripts of the early sixteenth century: the Hours of James IV of Scotland (™NB cod.1897, f.211v) and for St Thomas in the Rothschild Prayerbook (sold in these rooms 8 July 1999, lot 102, f.212). The workshop of the Master of the Prayerbooks of c.1500 also adopted it in a richly illuminated hours in Cambridge, Fitzwilliam 1058-1975 (A. Arnould and J.-M. Massing Splendours of Flanders, p.88) and the Prayerbooks Master is the likely source for the birds which here animate the empty sky of the Hastings Hours. The battling figures bear no relation to the psalm and were used for several different texts. The new independent validity of pictorial borders allowed owners of these luxurious devotional manuscripts to delight in their extended imagery, as this attractive leaf bears out....

Lot 35: MINIATURE BOOK OF HOURS, use of Rome, in Latin, ILLUMINATED MANUSCRIPT ON VELLUM