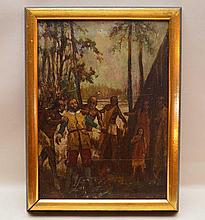 Description: An American Polychrome Painted Plaster Bust of General Winfield Scott (1786-1866), late 19th/early 20th c., after the original by William John Coffee (American, 1774-1846), inscribed on "WmJ Coffee/ Sculpture/ N.y." on rear truncation, height 29 Note: Winfield Scott was a general and national war hero. He fought in the War of 1812, the Black Hawk War, the Mexican-American War, the Second Seminole War, and the American Civil War. Scott served as the Commanding General of the United States Army longer than any other general, and ran against Franklin Pierce in the 1852 presidental election. In 1870, Scott's outstanding service to his country was commemorated on the 24 cent postage stamp, which was engraved after the bust by William Coffee offered here. References: American Historical Record 2:13 (1873): p. 427.... 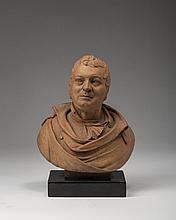 Description: The bust incised on the reverse "W.J. Coffee/ Fecit/ Derby/ 1814," mounted on a slate base. Height 9 1/2 inches.The sculptor and painter William J. Coffee first traveled to America in about 1817, and visited Thomas Jefferson at Monticello on March 4, 1818. Commissioned to execute busts of Jefferson and his family, he returned to Monticello on April 5, 1818 and within a week had completed busts of Jefferson, his daughter Martha, and granddaughter Ellen. Between 1818 and 1820 he also sculpted the busts of extended members of the Jefferson family. Until Jefferson's death in 1826, Coffee was occasionally hired to restore some of the paintings in Jefferson's collection at Monticello, and to create architectural frieze elements for various buildings.By July 1818, Coffee had sculpted busts of James Madison, his wife Dolley, and her son John Payne Dodd. In addition to Madison's family, he executed commissions for other families in the area and in Richmond, Virginia....