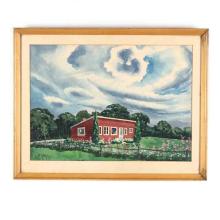 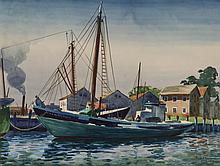 From Askart: Joseph Paul Di Gemma was born in New York City, and studied at Pratt Institute and the Art Students League. He has a B.S. in Art Education from New York University, an M.S. from Queens College, and teaches in the High School of Art and Design, part of the New York City school system. He is also an instructor at the Art League of Long Island. The author of "Lumiprinting : a New Graphic Art", di Gemma has numerous engravings in the Metropolitan Museum of Art, the Brooklyn Museum, the Astor-Lenox Collection, and the Smithsonian Institute. During World War II, he served with the U.s. Coast Guard as a combat artist. Aboard a Coast Guard Transport he went to China, India, Burma, Australia and Ceylon. Many of his paintings depicting life aboard a transport were exhibited at the Museum of Science and Industry, Rockefeller Center, New York City....