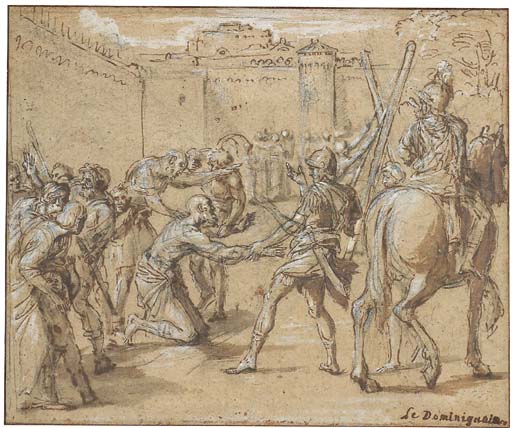 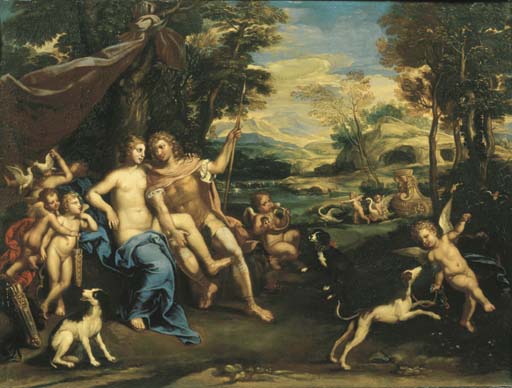 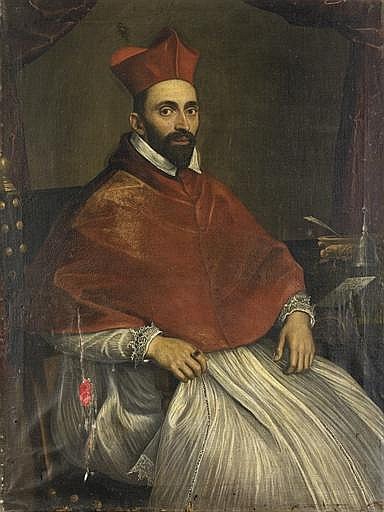 Domenico Zampieri, known as Domenichino for his shortness (October 21, 1581 – April 6, 1641), was an Italian Baroque painter of the Bolognese or Carracci School of painters.

Domenichino was born in Bologna, son of a shoemaker, and there initially studied under Denis Calvaert. After quarreling with Calvaert, he left to work in the Accademia degli Incamminati of the Carracci where, because of his small stature, he was nicknamed Domenichino, meaning "little Domenico" in Italian. He left Bologna for Rome in 1602 and became one of the most talented apprentices to emerge from Annibale Carracci's supervision. As a young artist in Rome he lived with his slightly older Bolognese colleagues Albani and Guido Reni, and worked alongside Lanfranco, who later would become a chief rival.

In addition to assisting Annibale with completion of his frescoes in the Galleria Farnese, including A Virgin with a Unicorn (c. 1604–05), he painted three of his own frescoes in the Loggia del Giardino of the Palazzo Farnese c. 1603–04. With the support of Monsignor Giovanni Battista Agucchi, the maggiordomo to Cardinal Aldobrandini and later Gregory XV, and Giovanni's brother Cardinal Girolamo Agucchi, Domenichino obtained further commissions in Rome. His most important project of the first decade was decoration of the Cappella dei Santissimi Fondatori in the medieval basilica of the Abbey of Grottaferrata (1608–1610), some 20 kilometers outside Rome, where Odoardo Farnese was the titular abbot. Meanwhile, he had completed frescoes c. 1604–05 in the church of Sant'Onofrio, feigned stucco decoration of 1606–07 in the Palazzo Mattei, a large scene of The Flagellation of St. Andrew at San Gregorio Magno, painted in competition with a fresco by Reni that faces it, and a ceiling with Scenes from the Life of Diana, 1609, in the Villa Odescalchi at Bassano di Sutri (today Bassano Romano).

Following Annibale Carracci's death in 1609, the pupils who had followed Annibale's Roman style, including Domenichino and Francesco Albani, were not as successful at gaining the most prestigious commissions as Guido Reni. As Donald Posner stated in his influential thesis, The Roman Style of Annibale Carracci and His School, ‘...it should be stressed that the severe classicism of Annibale’s late style had an immediate life in Rome of only about a lustrum [five years].’[1] In turn, the Bolognese biographer Malvasia states that 'only Guido [Reni] was put ahead of everyone else, Guido alone proclaimed and well treated, while [Domenichino], on the contrary, was either not recognized or constantly mistreated in the fees he got, so that he was left without commissions and rejected. Therefore, he was forced to go begging for work, with much effort, through intermediaries, and at any price... the same had been true of the Flagellation of Saint Andrew, which had been painted for a hundred and fifty scudi, whereas in the case of the Adoration of the Cross on the opposite wall four hundred scudi had gone to Guido.' [2]

One of Domenichino's masterpieces, his frescoes of Scenes of the Life of Saint Cecilia in the Polet Chapel of San Luigi dei Francesi, was commissioned in 1612 and completed in 1615. Concurrently he painted his first, and most celebrated, altarpiece, The Last Communion of St. Jerome for the church of San Girolamo della Carità (signed and dated, 1614). It subsequently would be judged as being comparable to Raphael's great Transfiguration and even as "the best picture in the world".
Domenichino – Landscape with Tobias

By late 1616, Domenichino had designed the coffered ceiling with The Assumption of the Virgin in Santa Maria in Trastevere; and he had begun a cycle of ten frescoes depicting the Life of Apollo in a garden pavilion of the Villa Aldobrandini (Belvedere) in Frascati, where he was assisted by Giovanni Battista Viola, a Bolognese artist who, like Domenichino himself, was a pioneer in the development of classicistic landscape painting. From 1617 until 1621, Domenichino was absent from Rome, working in Bologna and at Fano, where during 1618–19 he frescoed the Nolfi chapel of the Fano Cathedral with Scenes from the Life of the Virgin.

With the election of a Bolognese pope (Gregory XV) in 1621, Domenichino returned to Rome. Appointed Papal Architect (he built little but left drawings for various projects, most notably for the façade of Sant'Andrea della Valle and for the plan of Sant'Ignazio, both in Rome), he nonetheless continued to be most active as a painter, obtaining many commissions for altarpieces in Roman churches (San Lorenzo in Miranda, 1626–27, SS. Giovanni Evangelista e Petronio dei Bolognesi, 1626–1629, Santa Maria della Vittoria, 1629–30, and St. Peter's, 1625–1630). He also executed numerous frescoes in Rome during the 1620s: a ceiling in the Palazzo Costaguti (c. 1622); the choir and pendentives in Sant'Andrea della Valle, where he worked in fierce competition with Lanfranco, who painted the dome above Domenichino's pendentives; and the pendentives of San Silvestro al Quirinale (c. 1628) and San Carlo ai Catinari (1628–30).

In spite of his activity in Rome, Domenichino decided to leave the city in 1631 to take up the most prestigious, and very lucrative, commission in Naples, the decoration of the Cappella del Tesoro di San Gennaro of the Naples Cathedral. His Scenes from the Life of San Gennaro occupied him for the rest of his life. He painted four large lunettes, four pendentives, and twelve scenes in the soffits of the arches, all in fresco, plus three large altarpieces in oil on copper. He died, perhaps by poison at the hands of the jealous Cabal of Naples, before completing the fourth altarpiece or the cupola, which was subsequently frescoed by Lanfranco.
The Sacrifice of Isaac, 1627–28 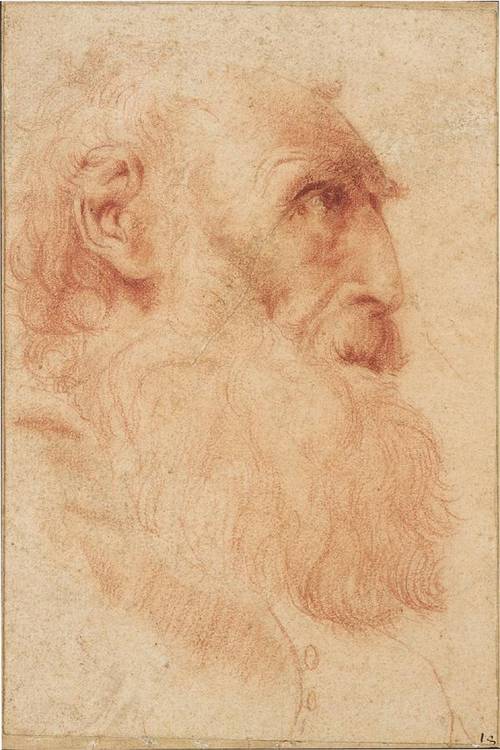 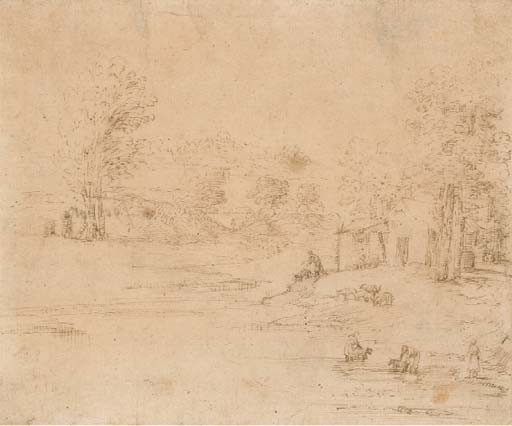 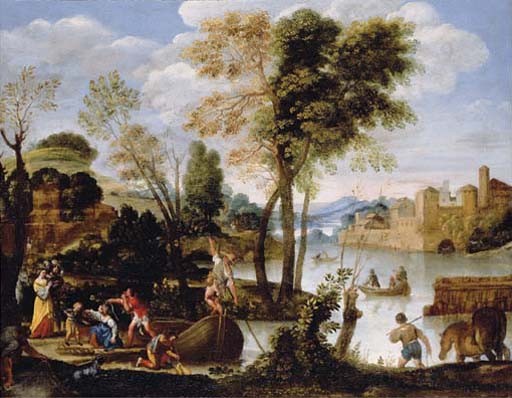 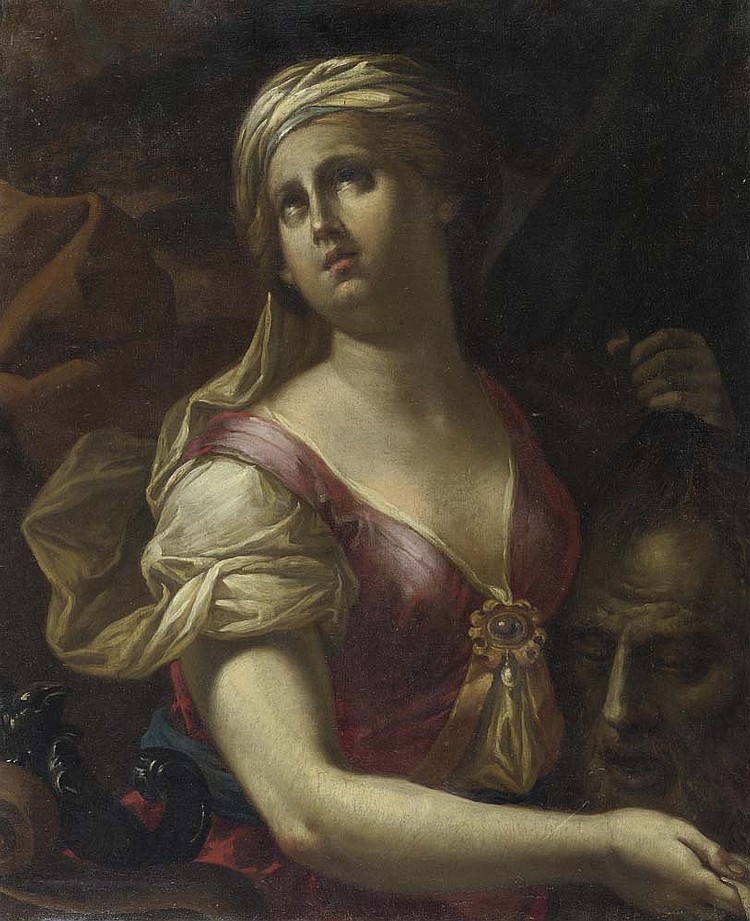 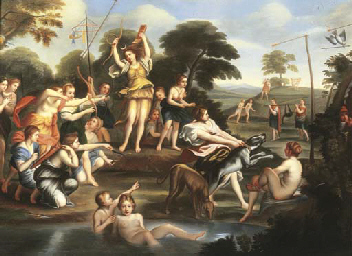 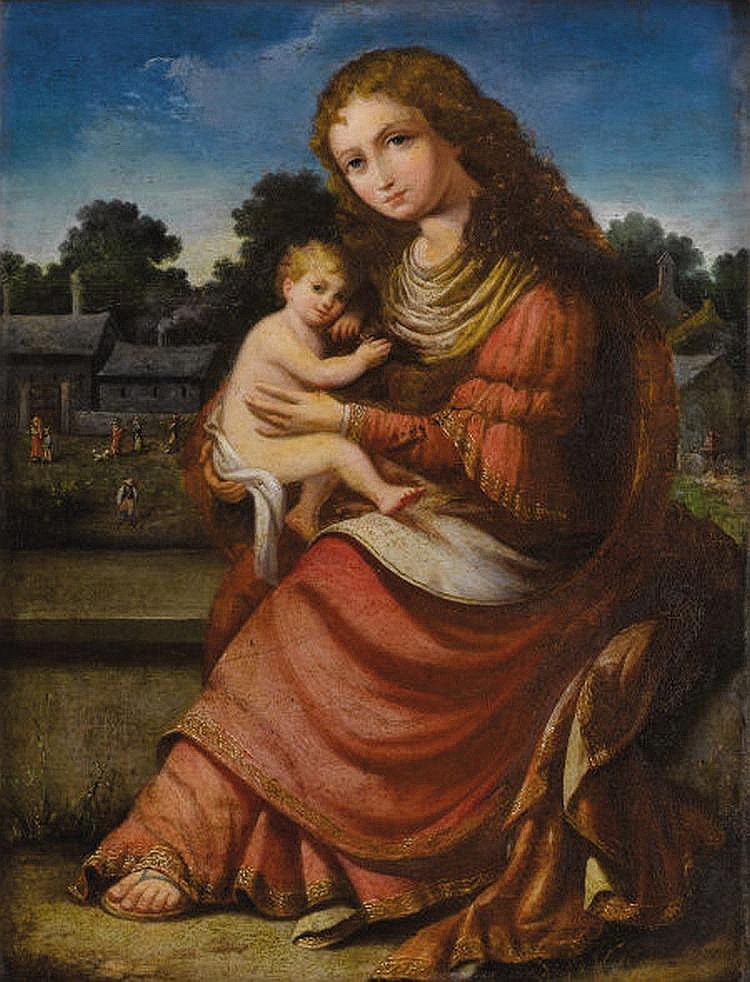 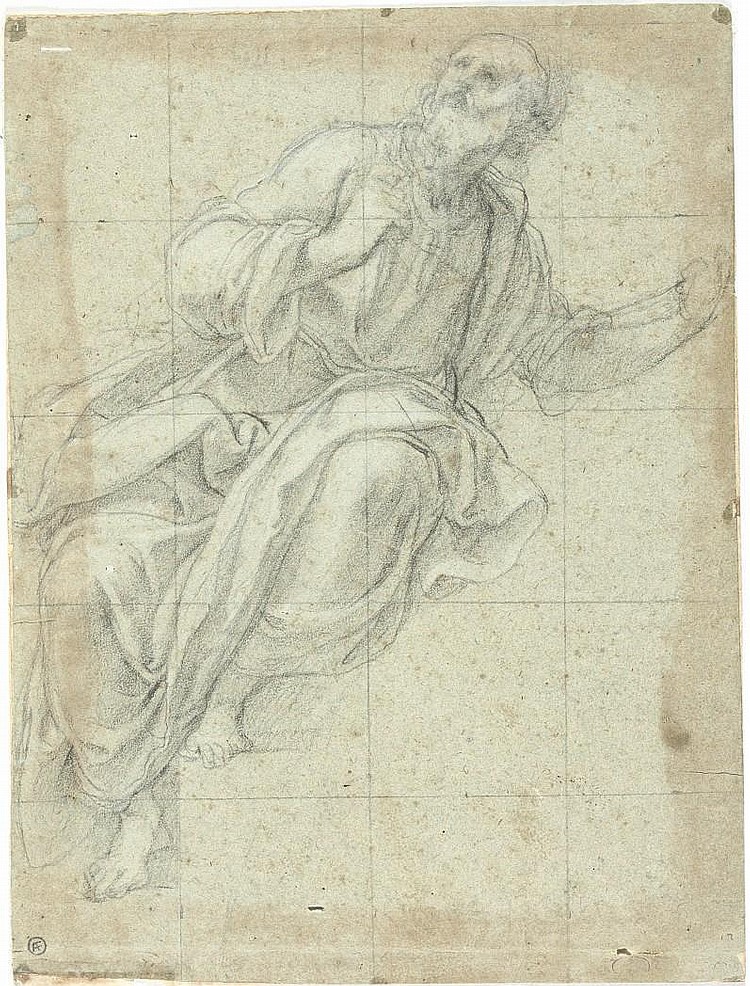 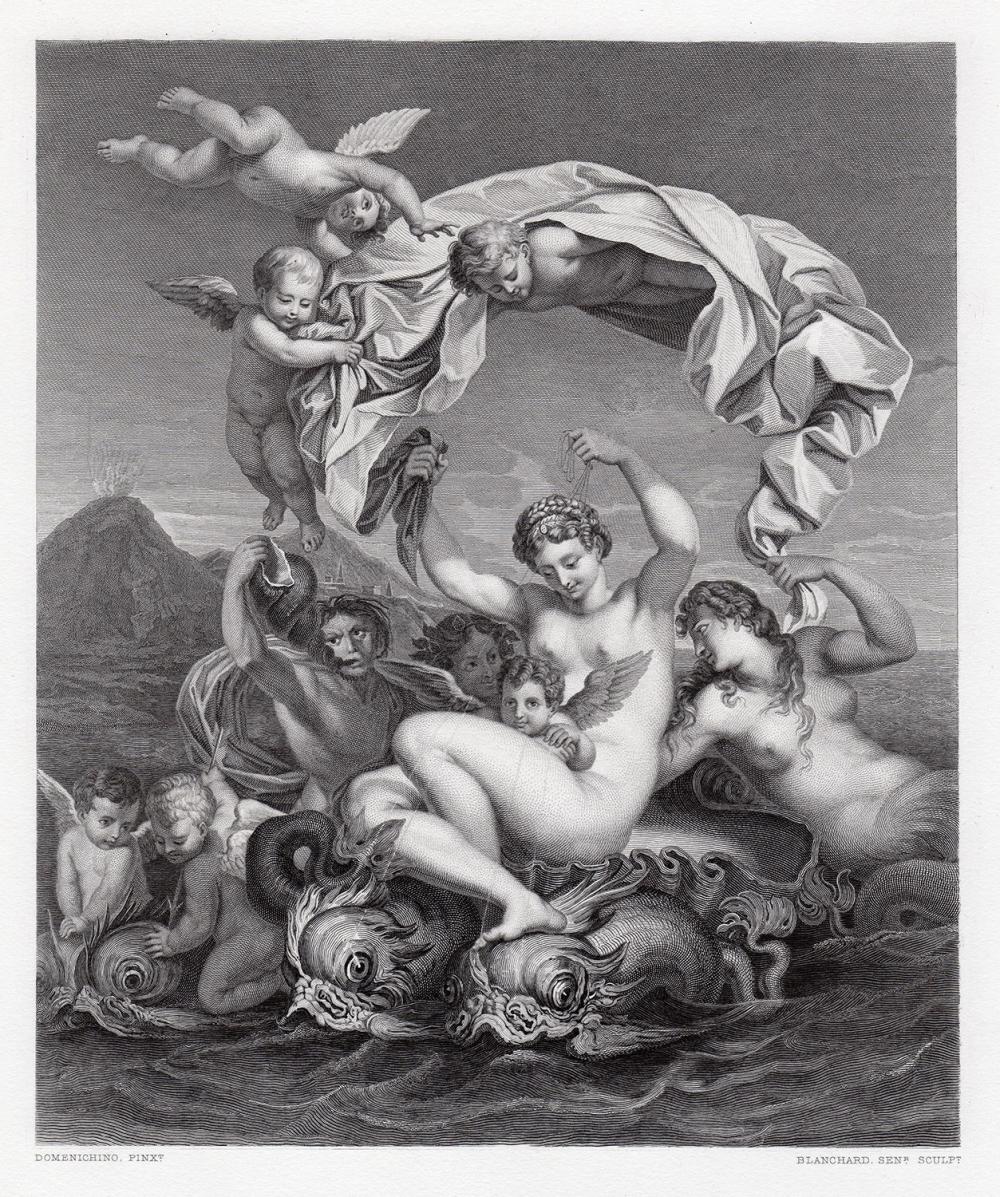 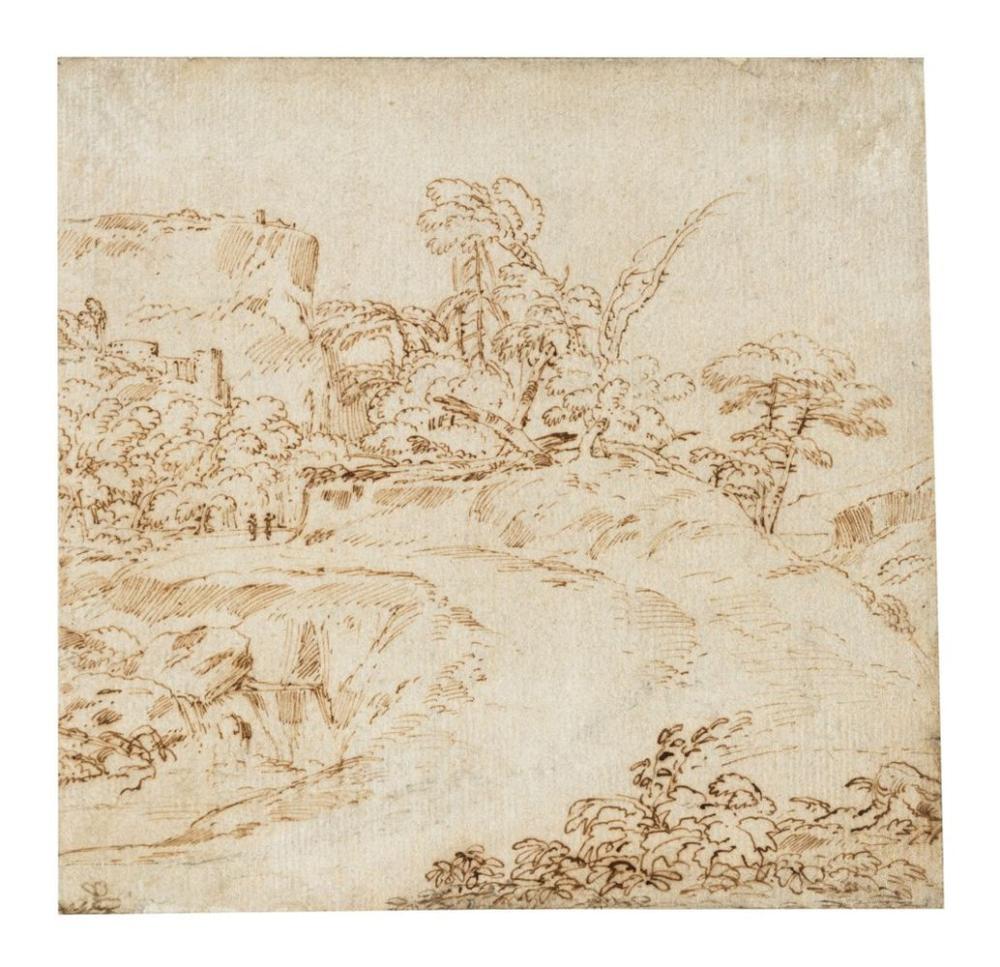 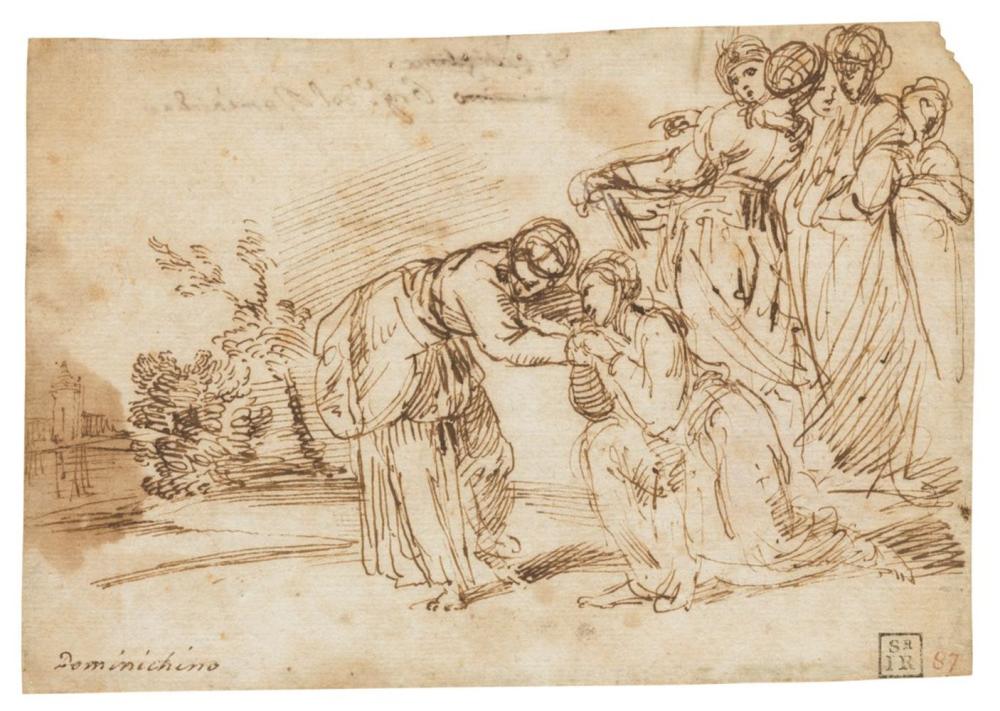