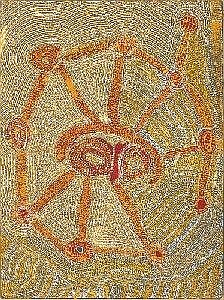 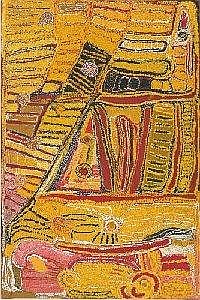 Eubena (Yupinya) Nampitjin (1920s-2013) was one of the best known of the Warlayirti Artists from Balgo Hills, in the north of Western Australia. Eubena was born at Tjinndjaldpa, south of Jupiter Well in the Great Sandy Desert, and was taught maparn, or traditional healing skills, as a young girl by her mother, Mukaka.

Eubena Nampitjin lived a nomadic life with her family in their ancestral country, hunting, performing ceremonies and law for the maintenance of their country and for their own spiritual well-being. It was a harsh life and gradually the extended family dispersed, many going west to the outstation of Jigalong. Eubena married Tjapaltjarrri Gimme, and with their family then went droving along the Canning Stock Route, before settling at Billiluna Station, 220 km south of Halls Creek.

When the Aboriginal painting movement spread from Central Australia to the remote outpost of Balgo in the 1980s, it was the men who began to paint first, and Eubena began by collaborating with her second husband Wimmitji Tjapanardi. Their work shared a luminous and intricate complexity along with a love of the warm reds, oranges and yellows that continue to be Eubena’s signature today.

Eubena (Yupinya) Nampitjin is the best known of Balgo's many painters. Below is a short summary of her life. We regularly offer paintings by Eubena in the Paintings Gallery.

Eubena was born some time in the 1920s at Tjinjadpa, west of Jupiter Well on the Canning Stock Route in Western Australia. She speaks Wangkajungka and Kukatja languages. She is one of the most esteemed law women in the Balgo community, being consulted and deferred to on all questions of law.

When she was a young girl, Eubena was taught her maparn (traditional healer) skills by her mother Moogaga. The family travelled and hunted on the northern fringes of the Great Sandy Desert, performing ceremonies and law for the upkeep of their country and their own spiritual preservation.

Nomadic life was harsh and most of her extended family died or moved to other parts of the country. Eubena talks of many 'sorry' times associated with these losses in her family.

Eubena with her husband and family traveled up the Canning Stock Route to Billiluna Station before following the mission as it moved around, until arriving at its present site at Balgo Hills. Before his death, her husband Gimme helped Father Piele with a Kukatja (Eubena and Gimme's second language) dictionary, to which Eubena also contributed. Today she is one of the few people alive who maintains a full vocabulary of this language.

Despite living at the mission and tending herds of goats, Eubena continually travelled back to her country, living in and from the land for extended periods. Her extraordinary hunting instinct (which remains today) combines with an effortless energy when she is out in the country. She still regularly spends months at a time out in the bush.

Eubena started painting with her second husband Wimmitji in the mid 1980s. Their work shared a luminous and intricate complexity along with a love of the warm reds, oranges and yellows that continues to be Eubena's signature today. Eubena's reputation grew, as one half of the famous painting duo at Balgo, but also as a solo artist in her own right. She is now recognised as the leading artist in Balgo and one of the outstanding Aboriginal artists in Australia.


Eubena has great spontaneity and strength in her painting, leaving rhythmical tracks across the canvas composed of thick layers of dotted lines. Painting is like her second language and she paints persistently with passion and dedication.

While she is a regular and committed painter, the number of paintings she has produced has fallen in recent years because of the amount of time she spends out on her country, away from the "humbug" of community life.

Eubena's work is represented in many major public and private collections in both Australia and overseas. A large article about her was included in the March 2001 issue of "Australian Art Collector" magazine where she was rated as one of the 50 most collectable artists in Australia.

View All Eubena Nampitjin for Sale at Auction Now 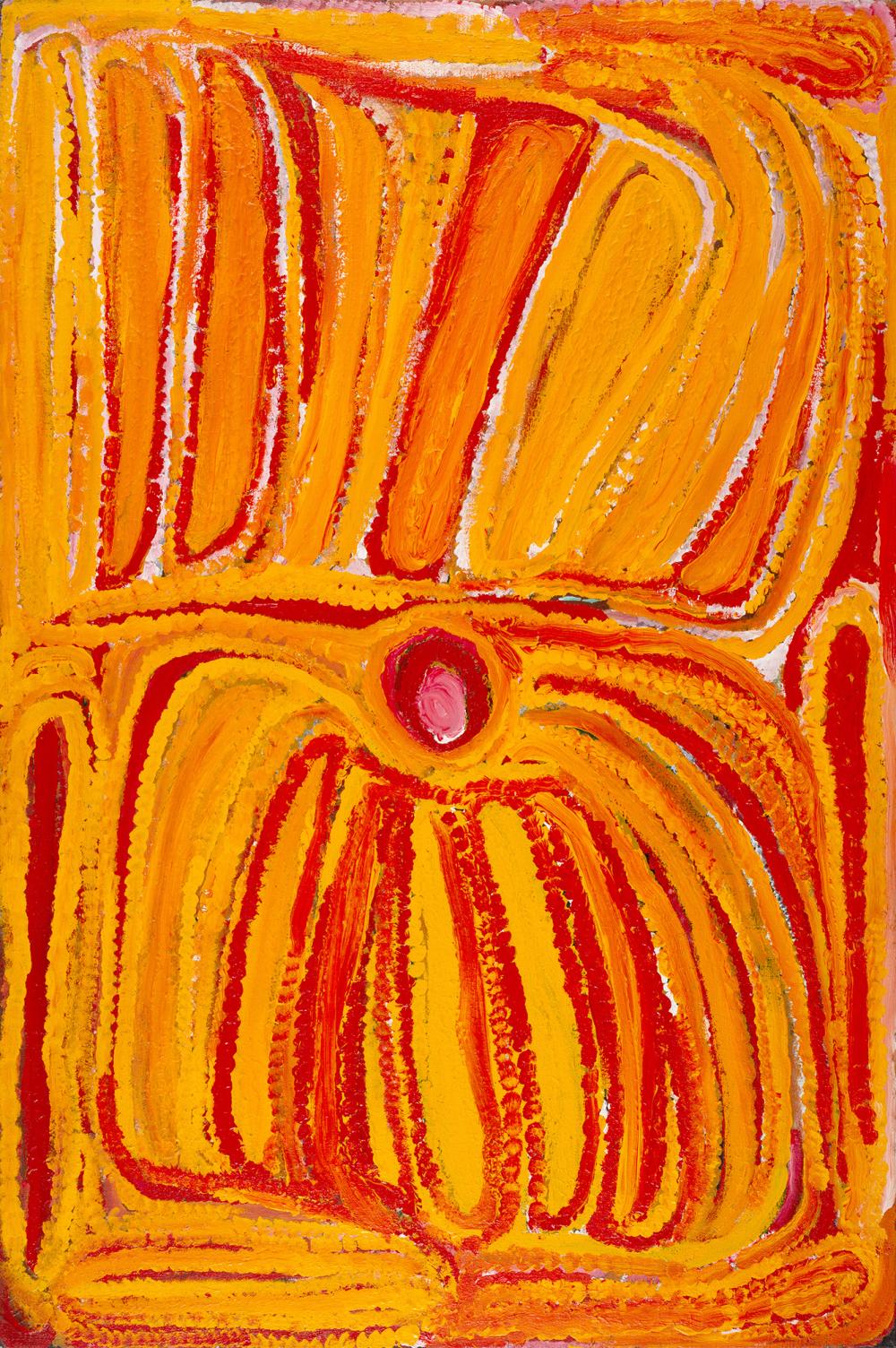 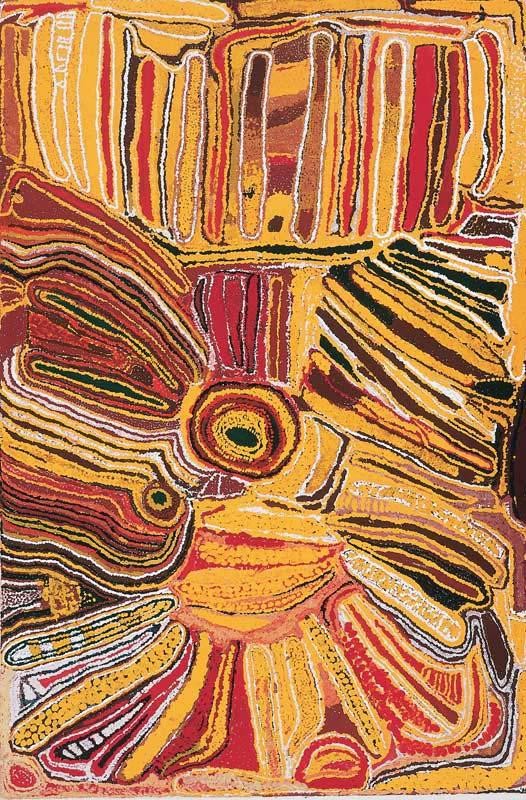 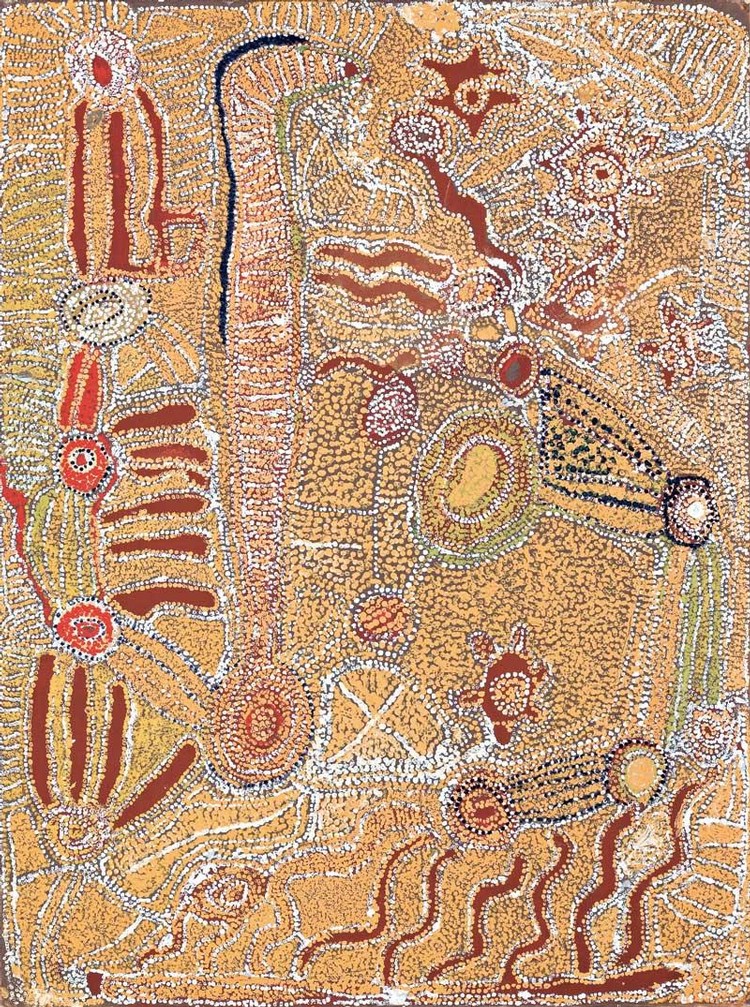 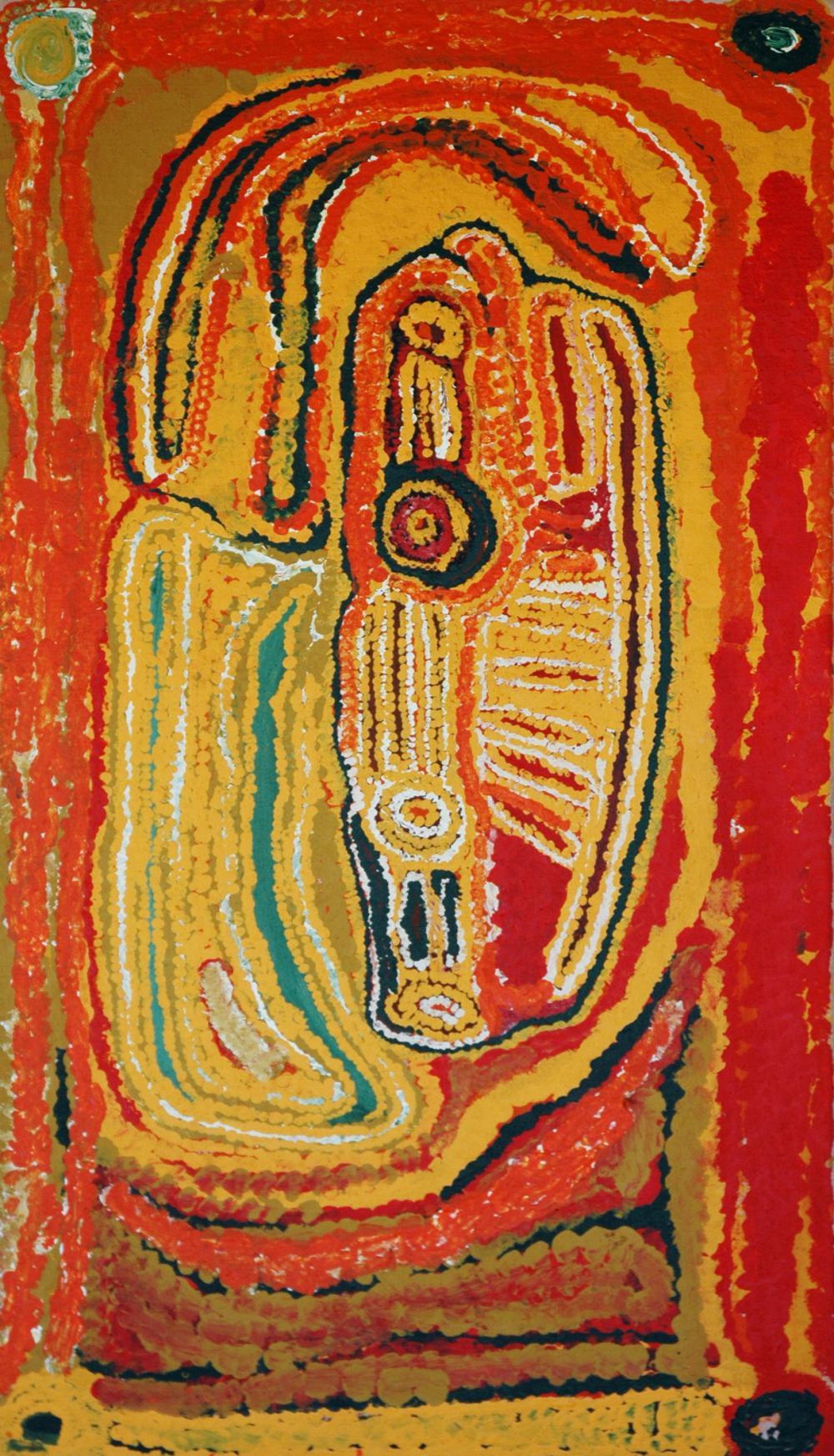 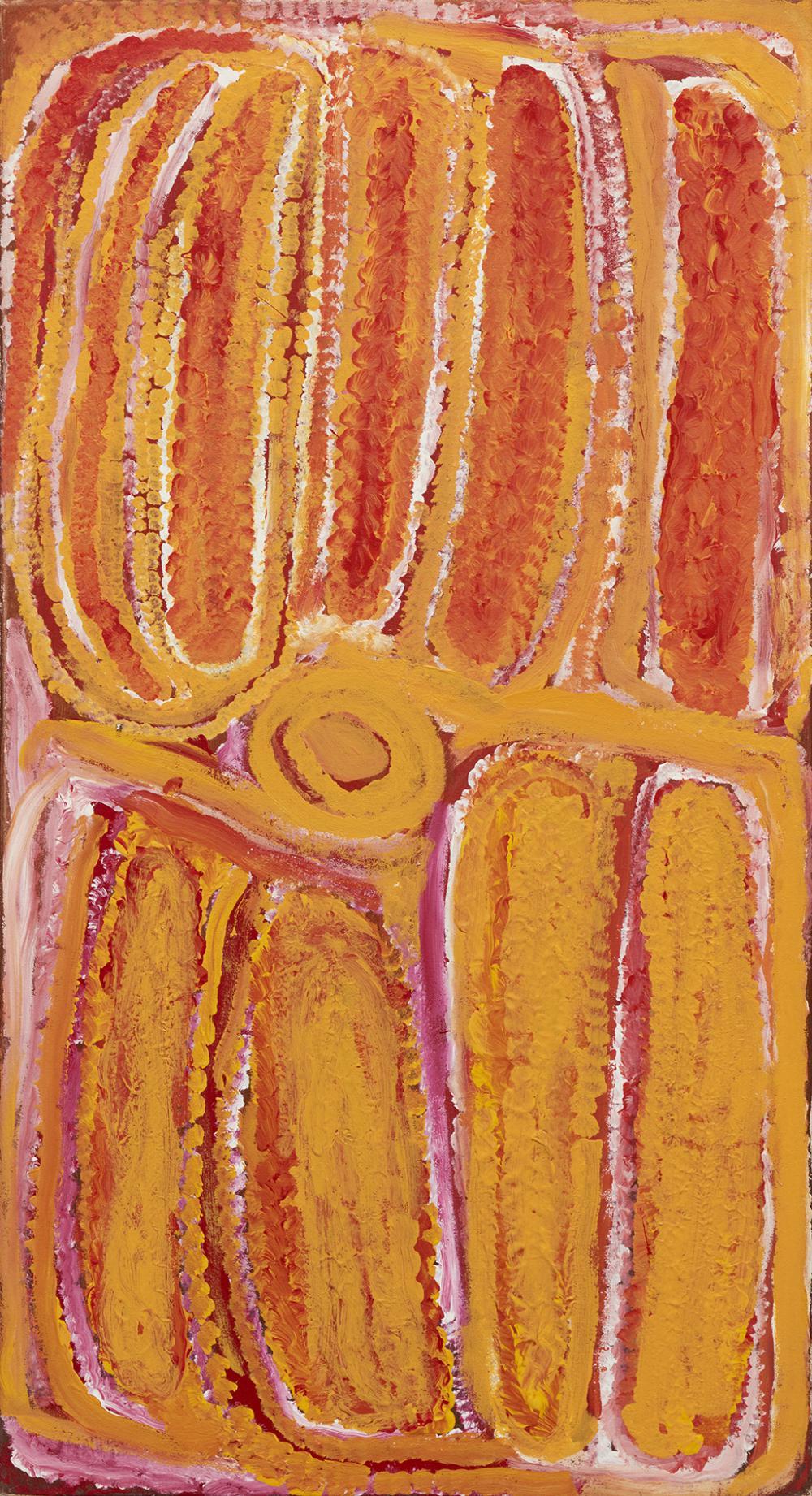 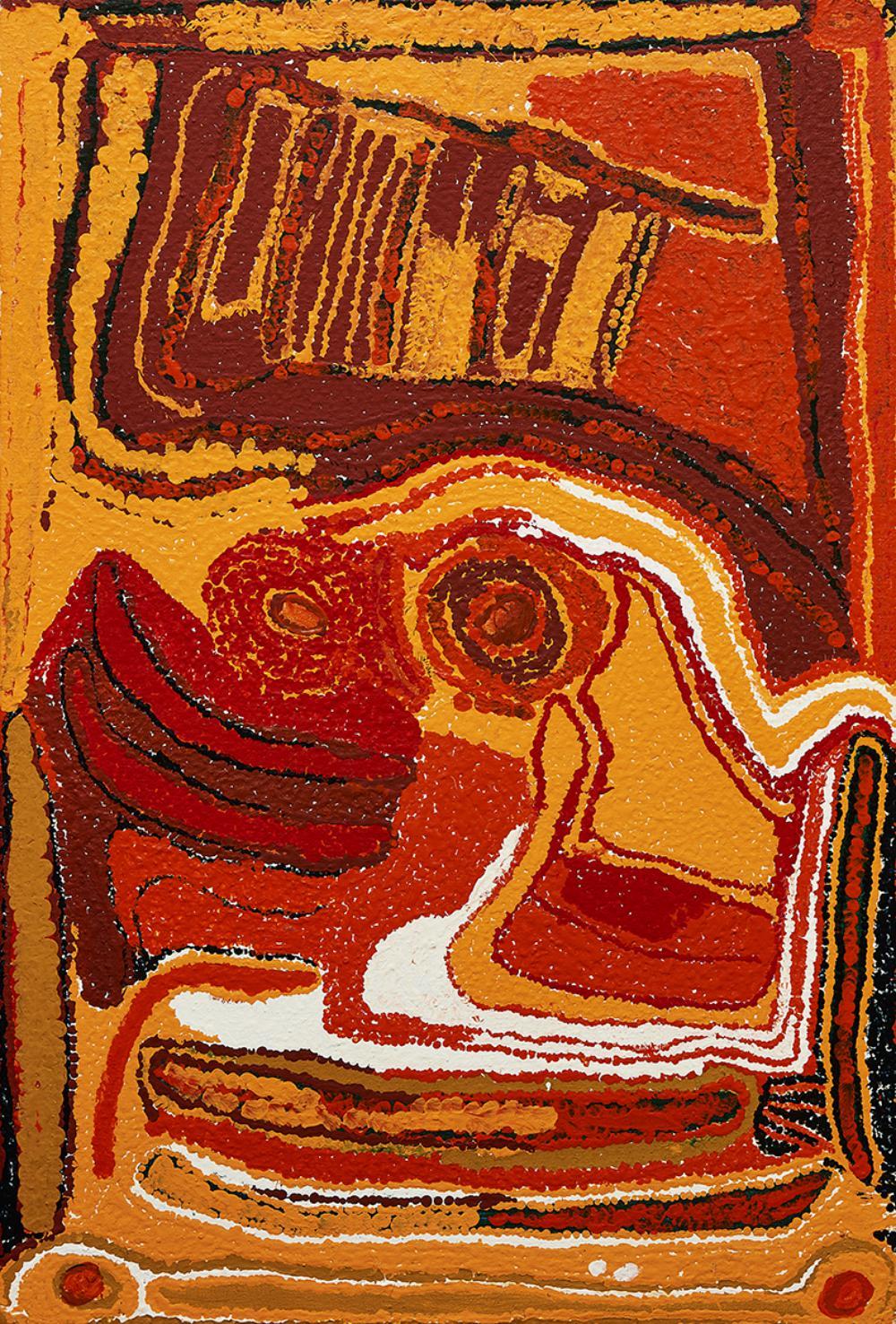 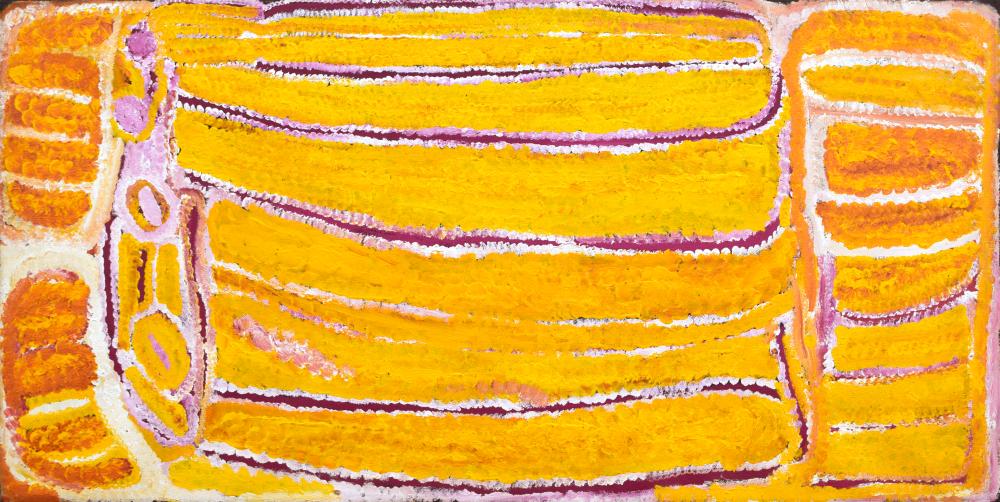 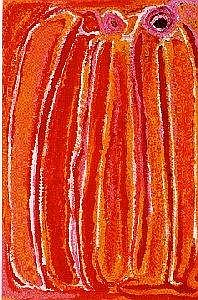 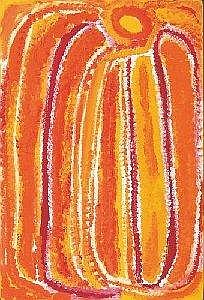