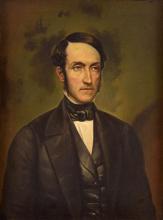 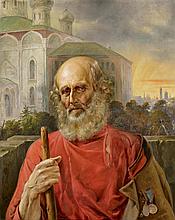 Otto Grashof (1812-1876) was apprenticed to be a portrait and history painter in Berlin and Düsseldorf. At the Düsseldorf Academy he was a student of Wilhelm Schadow. Since the young artist's occupational outlook in the Rhineland and in Prussia was not satisfying after his studies, he joined a merchant travelling to St. Petersburg in early February 1883 in hopes of better work possibilties in Russia. In St. Petersburg and in Moscow he was active until 1845. He obtained orders from the highest social classes, including the family of the czar. Emperor Nikolaus I. was sympathetic with German artists. Initially Grashof was supported by German merchants who made him portray themselves. Since the paintings were excellently elaborate a large circle of persons took notice of him. Furthermore, he painted families, scenes of horsemen, bear hunts, the zealot Wassili Weliki, and landscapes. Moreover, he dedicated himself to historic subjects as a demonstration of Russian military history such as the Russian-Ottoman War in 1828/29.
Grashof made his living in Moscow from 1841 until 1843. There, he also met Franz Liszt who he portrayed in 1843. This portrait can be considered one of Grashof's main works. The painter lived humbly: "Heaven always gave me as much as I needed. Even though the circumstances did not allow an accumulation of things, I kept up my guts and remained positive in hopes of better times and happy occurences ahead", he wrote to his mother. He also informed her in detail concerning his work in Moscow on October 18, 1843. He describes some paintings, among them the depiction of an old soldier. He claims to have painted a "beautiful old man" who fought in the battles of Otschakow and Suworow in 1788. Back then the Russian fleet triumphed over the Ottoman fleet. "He served me as a model of an old Russian invalid", explains Grashof, describing the motif as follows, "In late summer or already early autumn, at a sunset illuminating the rich cupolas and towers of Moscow, the invalid walks to the oldest church which czar Peter the Great built and to which the contemporary emperor added two large wings for the invalids. The man is dressed in a red shirt and an old medallion-decorated soldier coat of his regiment which fought in France, Persia, Turkey, and Poland. His right is resting on a simple fir stick, his white beard falls over his chest and his dignified characteristics make the man who sacrificed his life for the emperor and his country many times sympathetic." The high sympathy Grashof felt for this veteran can explicitely be seen in the painting. As a farewell gift the czar presented the painter with the Gold Medal for Merit for Art and Science in 1845. Henceforth Grashof was allowed to call himself "Royal Russian Court Painter". In Berlin Grashof hoped in vain for support by the Prussian king. In 1852 he went to South America where he travelled Argentina, Uruguay, Chile, and Brazil for five years. His artistry found a sad end when he lost his vision at the age of 50.

Description: GRASHOF, OTTO
1812 Prenzlau - 1876 Cologne
Brazilian Landscape near Rio de Janeiro (Niterói?).
Oil on canvas. Laid down on wood. 66 x 100cm. Inscribed, signed and dated lower left and right: Capella de Sa. Anna / Brasilien / O. Grashof / Aug. 1856. Framed.
Provenance:
Private collection Westphalia, family and direct descendents of the artist.
Literature:
Mentioned and illustrated in: Löschner, Renate: Otto Grashof. Die Reisend des Malers in
Argentinien, Uruguay, Chile und Brasilien 1852-1857, Berlin 1987, p. 123f, ill. 62.
In the years after 1852 Otto Grashof settled down in Rio de Janeiro and travelled through the adjecent countries in South America. Living in Cologne, born in Prenzlau, with an education as a painter at the Academy in Düsseldorf, he had made himself a name as a painter of literary historic subjects in his earlier years.
Shaped by his stay in Russia from 1840 onwards his topics became more and more exotic for the contemporary taste. His stay in South America is very well documented by numerous first-hand letters and reports, which additionally give a very fascinating impression of the local life in the mid 19th century. Moreover there are letters in which he provides an insight on the development of the present depiction of the small chapel St. Ana over a lagoon with a view on the famous Sugarloaf Mountain in the background. "My next work will probably be to depict the region from the height of a chapel about 1 1/2 miles away from Rio. I hurry all the more with it as this ruin is soon to be broken down, and the spot will not only loose a lot of its value wihout the ruins, but it will also not be able to serve as a memory spot for the pilgramage up the mountain."... 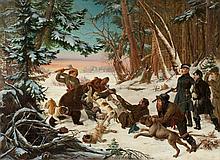 Description: OTTO GRASHOF (1812 Prenzlau - 1876 Cologne) 'BÄRENHETZE' 'BEAR HUNTING' Öl auf Leinwand. 109 x 148 cm. Rahmen. Unten rechts signiert 'O. Grashof, Moscow' und Oil on canvas. 109 x 148 cm. Signed lower right 'O. Grashof, Moscow' and dated '1843'. Layed down on canvas. Framed. im Hintergrund. Die Szene konzentriert sich auf den Moment kurz vor der Tötung des Bären: Literature: Vergessene Kölner Künstler: otto Grashof (1812-1876). Ausstellung im Kölnischen Kunstverein Friesenplatz Februar 1934, Köln 1934, Kat. 33. Provenance: Private Collection Mönchengladbach (1934); Private Collection Rhineland. weitere Jäger, teils mit Gewehren und Schwertern gerüstet, das Geschehen. Inmitten der Dynamic scene of a bear hunting in a forest with a monastery in the background. The scene is focused on the moment before killing the bear: one huntsman felt down and pushes his lance into the mouth of the bear, which is surrounded by five dogs, while another huntsman lifted his axe to behead the bear. On the right side four huntsmen observe the scene. In den folgenden Jahren bereiste er die Welt. 1838 machte er sich nach Russland auf. Otto Grashof received his education at the Düsseldorfer Academy under Schadow. In the following years he travelled around the world and went to Russia in 1838. He stayed there for seven years and worked in particular for the Russian court society. His battle paintings and scenes of bear hunting as well as his congenial portraits were very popular. In 1845 he went to Berlin where his success continued at the court and in higher circles. On the Exhibition of the Berlin Acadmy he presented several paintings, which reflected the influence of his stay in Russia. In 1852 he journeyed to South America and died in 1876 back in Germany. The painting at hand is one of the paintings created in Russia, where he also tried to execute paintings for the tsar. The exhibition register of 1936 shows that Tsar Nikolaus I. (1825-1855) owned some paintings of Grashof and some where presents of the star to aristocratic friends. seiner Zeit in Russland schuf. Grashof war ein geschätzter Künstler der russischen In a letter to his mother in Cologne from October 1843 Grashof mentions the painting and writes about the life in Russia, which influenced the painting: He tells about planning a large sized painting of bear hunting in the winter he wanted to present to the tsar. In preparation he visited a German factory owner in the forest near Wladimir. He combined the nature studies with the scene of killing a bear which he had seen in a kennel in Moscow. The artist painted two versions of the bear hunting. He sold one in Frankfurt, the other in Chile. The painting at had is most likely the version sold in Frankfurt and deriving from a family in Mönchengladbach was exhibited in 1934 at the Cologne Kunstverein. Fabrikanten besuchte und die Gelegenheit für Vorarbeiten und Naturstudien für sein Projekt We are grateful to Dr. Renatde Löschner for her help in preparing the catalogue entry for this work. Dr. Löschner is author of the monograph 'Otto Grashof. Die Reisen des Malers in Argentinien, Uruguay, Chile: Mit einer Dokumentensammlung', Berlin 1987.
OTTO GRASHOF 1812 Prenzlau - 1876 Köln 'BÄRENHETZE' Öl auf Leinwand. 109 x 148 cm. Rahmen. Unten rechts signiert 'O. Grashof, Moscow' und datiert '1843'. Dynamische Darstellung einer Bärenjagd in einer Waldlichtung vor einer Klosterarchitektur im Hintergrund. Die Szene konzentriert sich auf den Moment kurz vor der Tötung des Bären: ein durch den Kampf zu Boden gegangener Jäger stößt mit seinem Speer in das Maul des Bären, der von fünf Jagdhunden umzingelt wird, während ein weiterer Jäger sein Beil erhoben hält und im Begriff ist, den Bären zu enthaupten. Am rechten Rand betrachten vier weitere Jäger, teils mit Gewehren und Schwertern gerüstet, das Geschehen. Inmitten der rechten Dreiergruppe drängt ein junger Mann energisch nach vorn, wird aber von einem der Begleiter zurückgehalten. Doubliert. Otto G... 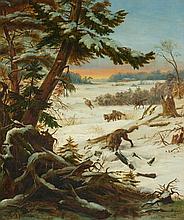 Description: Signed and dated upper right: O. Grashof. Moskau 1843Otto Grashof led a somewhat unusal life for the 19th century. Born in Prenzlau, he grew up in Cologne and studied at the Academies of Düsseldorf and Berlin. The artist resided in Russia as of 1838, first in St. Petersburg and then in Moscow from 1841 - 43, before returning to St. Petersburg in 1845. Grashof spent the following years in Germany, before travelling via Spain to South America in 1852. Here he visited Argentina, Uruguay, Chile and Brazil, before returning to Cologne in 1857. As of 1862 he pursued a career as an author with varying success, before dying in Cologne at the age of 63.The present work, with its rather macabre theme taking place in a Russian winter landscape, was painted during the artist's Moscow phase.... 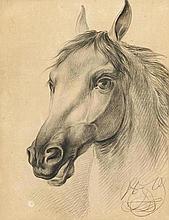 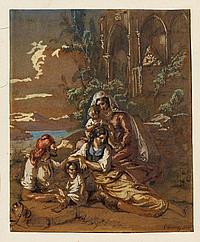 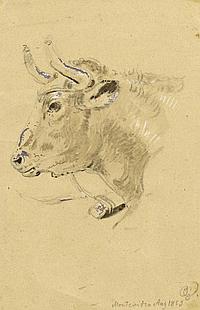 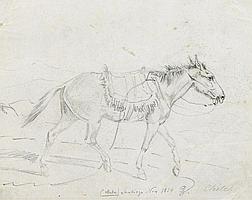 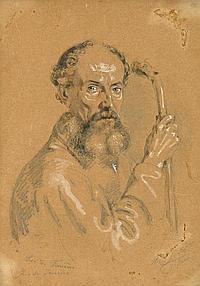 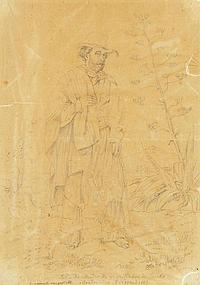 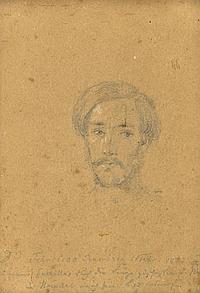 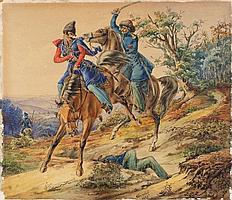 Scene of a Battle on Horseback during the Caucasian War. Signed and dated lower center: OGrashof 1841. Watercolour and ink, heightened with white on paper. Mounted: Laid down. 25,8 x 29,5cm. Framed.

A very similar drawing is in Wallraf-Richartz-Museum - Fondation Corboud, Cologne (Object 05028236). In the foreground, a Caucasian rider on horseback with a sword in his left hand being pursued by a Russian Cossack. The colour of the uniforms referrs to the first Terskov Cossack regiment (1821-1831). From 1831 to 1851, a collarless "tscherkeska" (uniform) with cuffs was introduced, whereas the uniform shown here was only used from 1821-1831.

We would like to thank Bogdan Viktorovitsch Nebelevitsch, the president of the Museum of Military Uniforms in St. Petersburg, for his kind support.
Grashof, Otto
1812 Prenzlau - 1876 Köln 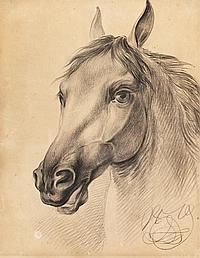 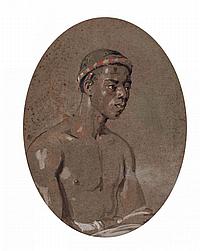 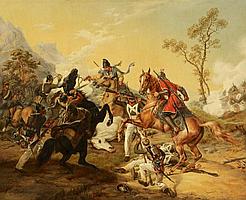 Verso:
A label on the stretcher with an inventory number handwritten in india ink.