Chris Hindley
Who is Chris Hindley?
Chris Hindley - A woodcarver from Cheshire, England, Chris Hindley is best known for his contemporary and stylised bird carvings. A strong belief in the simplicity of line, form and colour are the artistic principles which shape his observations of the wild bird into the finished work, this, and the definite influence of North American folk art and decoy carvings. Chris considers himself fortunate to have won a number if awards for his carvings at other well known national shows as well as being published in numerous magazines and books both here and abroad.

n about 1990, I considered myself to be a failed artist - I had been driven to create and had been to art school, however I had never found a medium that I was happy with or good at. So by this stage, I had drifted into sales and was selling insurance and financial products before moving into retail sales and becoming, in time, a store manager.

Lucky for me then that my father was looking to retire and take up a new hobby. He went on a weekend bird carving course with well-known carver David Clews, who was running Pintail Decoy Supplies at the time. Whilst I was happy for my dad that

he was lit up by carving, I was yet to be convinced - even though I opened up a bird carving kit on Christmas Day, I still didn't get it.

That kit became my first carving, a cedar goldeneye, followed by a shoveler hen in jelutong, which I spent hours detailing and painting, and whilst I had enjoyed these projects, it wasn't until my dad bought the book, The Decoy Duck by Bob Ridges, that I first saw the light, and could see the potential of the bird as a sculptural form.

What made you continue carving?

At about the same time as I started carving, the BDWCA was formed to encourage bird carving in the UK. I joined in 1993 and competed as a novice in their annual show the same year and picked up a couple of rosettes - no firsts though - and was happy to find like-minded people carving birds in many different ways and styles. I became addicted, and still am.

What inspires you when you carve?

The simplicity of line and form employed by the old time decoy makers of North America never ceases to inspire me. However,

for a modern collectors market, a carving has to be more than

a working decoy, at least this is true in Britain, and new shapes often just pop into my head at the oddest times and it is the new ideas that most inspire me to carve - I just have to get them out.

What are you currently working on?

I have just finished a Canada goose commission, and am about to start work on my entries for the 'Wildlife Artist of the Year' show 2011. I hope to carve a preening great auk as one of the entries and although the show isn't until the summer, all entries have to be submitted by the end of January, and as I write this, it is the end of November.

Which tool wouldn't you be without and why?

All my work is carved with a flexi-drive machine fitted with toothed cutters, and as I know no other way, I would be lost without it.

Some people would say that this isn't carving in the true tradition of working with chisels, and in many ways I would agree - however, my style is more sculptural, with very little detailed carving, and the flexi-drive suits this very well.

What do you think has been your biggest carving achievement?

Having won a number of awards at carving and art shows, I had set my heart on winning one particular award - this was the Birds Illustrated magazine award for the best avian artwork, in any medium, at the National Exhibition of Wildlife Art. Each year I saw it go to some fabulous painting and thought it was out of my reach until in the summer of 2007, the magazine owners chose my wall-mounted redshanks for the award.

Whose work do you most admire?

I don't pay much attention to what other carvers do - it is too easy to pick up someone else's style and subconsciously find yourself doing what they do.

If I had my arm twisted though, I would have to say Guy Taplin. Not just for his body of work and his carving style, which I admire greatly, but for the fact that he took naive bird carving from craft to mainstream art, and for doing that I think a number of carvers, including myself, owe him a debt of gratitude.

If you weren't a carver what would you be?

I daren't even think about it! Carving birds has been life-changing and brought me so much creative fulfilment that I can't imagine a life without it.

Describe the view from your workbench and the area you live?

Cheshire surrounds me with its wealth of green fields, forest and lakes, and I feel very lucky to live here. My workbench is in the spare bedroom and doesn't have much view of any sort really. We saved the views for the living room and bedroom, both of which overlook the garden and fields beyond.

Do you listen to music when carving?

Oasis or Paul Weller are usually blasting out of my workshop, with flexi-drives, air filters, dust collectors and an air-fed dust mask to contend with - any music has to be pretty noisy to stand a chance of being heard!

Art in any form should be about the creative self, so I only carve for myself and offer for sale the completed concept. I do, of course, take commissions, but only if I am given complete artistic control.

Are you a self-critic of your work?

In a big way! If an artist is not the biggest critic of their own work, then there is no growth or improvement. It is easy to spot the artist who thinks their work is great because it usually isn't, and it stays that way.
Show More 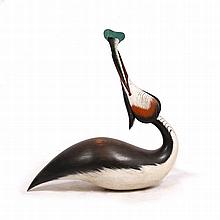 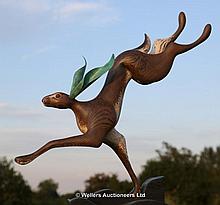 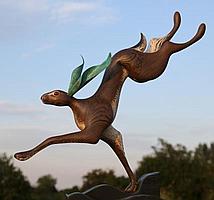 Description: Chris Hindley
Hare
Carved and painted wood
70cm.; 27½ins high by 64cm.; 25ins wide by 15cm.; 6ins deep
A folk artist from Cheshire, England, Chris draws his influence from both his own observations of birds and the early decoys of North America.
A strong belief in the simplicity of line, form and colour direct the final and original designs for which he is known both at home and abroad.
... 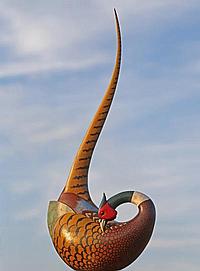 Description: Chris Hindley
Pheasant
Carved and painted wood
Unique
70cm.; 27½ins high by 64cm.; 25ins wide by 15cm.; 6ins deep
A folk artist from Cheshire, England, Chris draws his influence from both his own observations of birds and the early decoys of North America.
A strong belief in the simplicity of line, form and colour direct the final and original designs for which he is known both at home and abroad.... 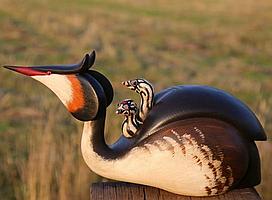 Description: Chris Hindley, Grebe with Chicks, Painted wood, Unique, 25cm.; 10ins high by 50cm.; 19¾ins wide by 20cm.; 8ins deep, A folk artist from Cheshire, England, Chris draws his influence from both his own observations of birds and the early decoys of North America., A strong belief in the simplicity of line, form and colour direct the final and original designs for which he is known both at home and abroad....