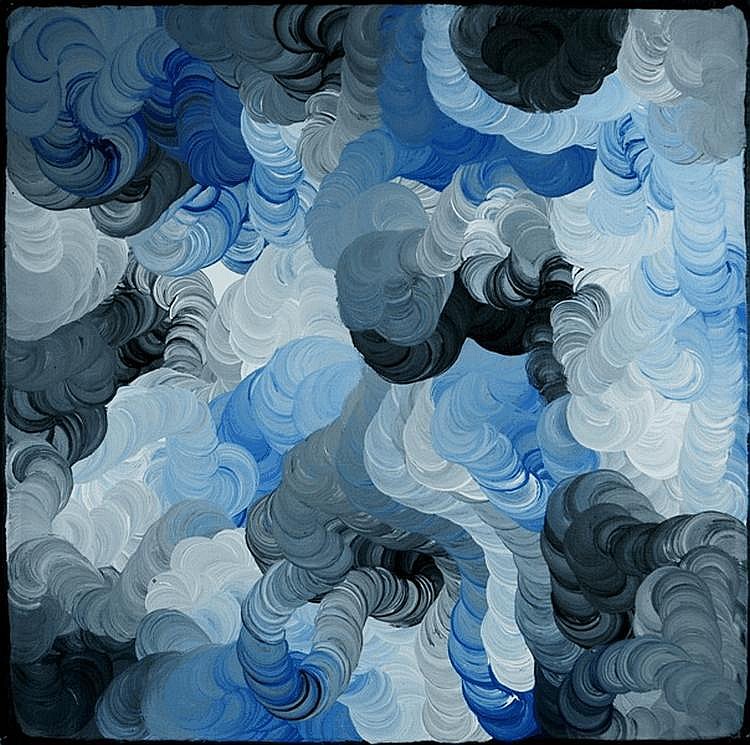 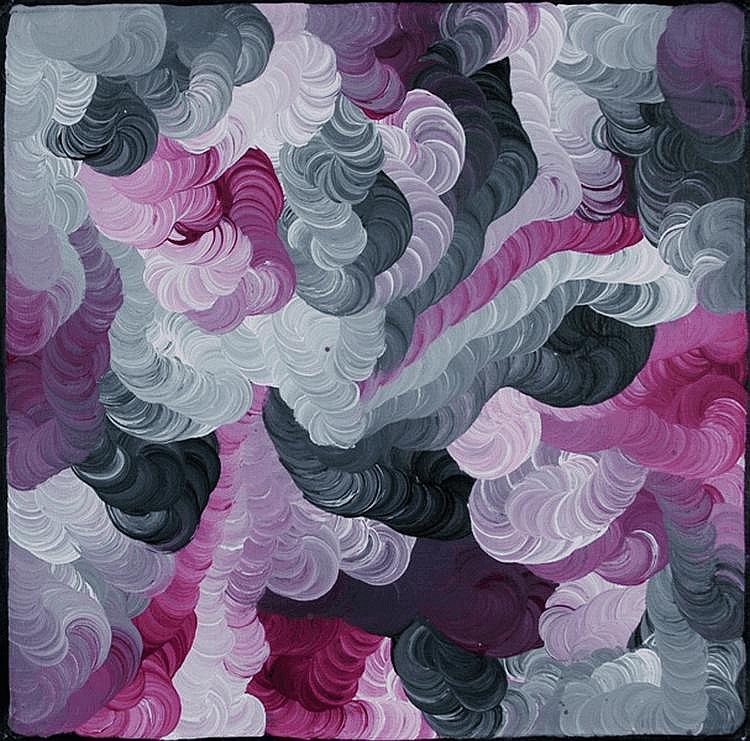 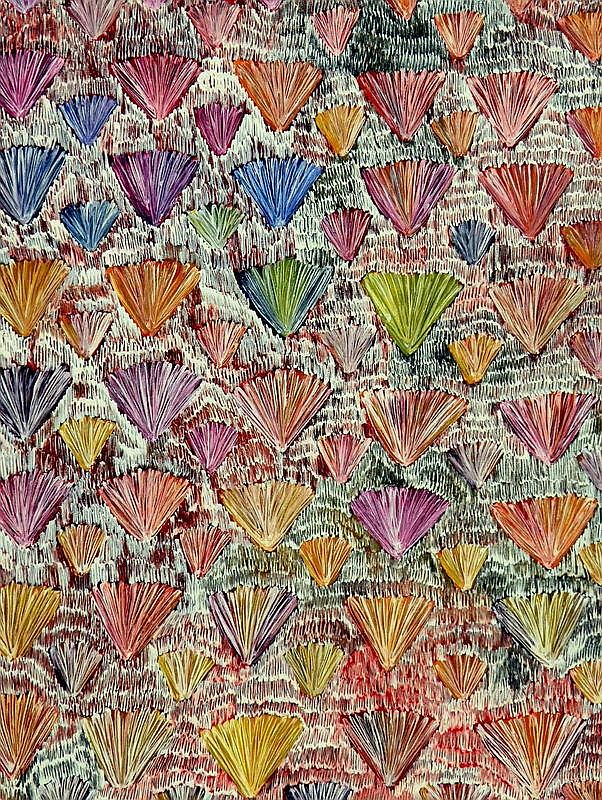 JANELLE STOCKMAN (c1980 - 2009), Original Acrylic Painting on Linen, Title: Bush Seed, Signed Verso, Accompanied by a Certificate of Authenticity and Photograph of the Artist with the Work 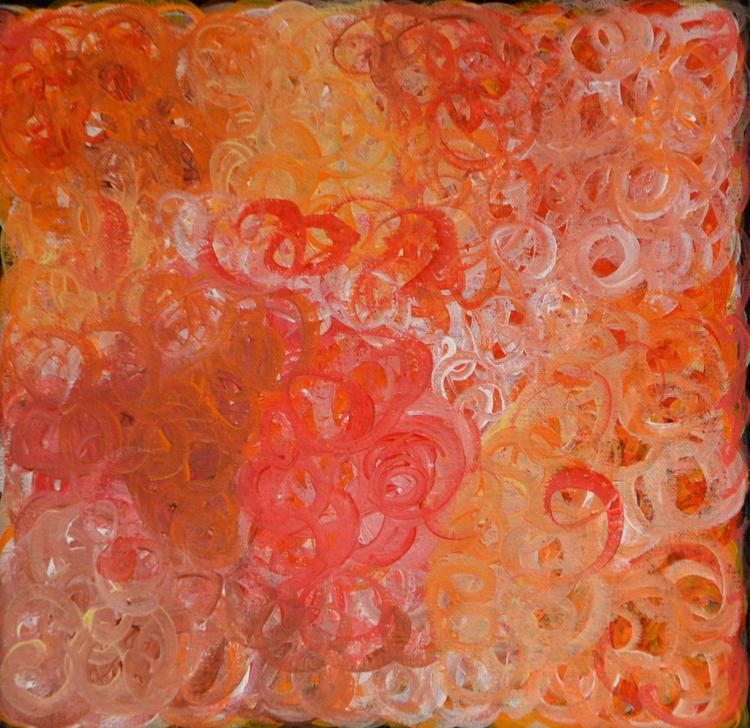 Janelle Stockman was a very talented and established aboriginal artist whose paintings are in demand for their unique contemporary style.

Janelle began painting in 2001 when Mbantua Gallery approached her to see if she would like to give it a try. She had always wanted to paint but had been busy raising a family. Being surrounded by the very habitual painting life of her husbands extended family in Utopia in Central Australia, Janelle received much encouragement from other artists when she began, including baby sitting by many of the ladies.

Janelle divided her time between Utopia with her husband's family (Mary Morton, Lucky Morton and Sarah Morton to name a few) and her traditional home land at both Hermannsburg and Papunya in Central Australia. Billy Stockman, who is famed for being one of the original members of the early Papunya Tula aboriginal artists is Janelle's grandfather, which drew an obvious pride in Janelle at the mention of his name.

Janelle's paintings have always been very contemporary in style because she wanted to do something totally different to everyone else. Janelle drew inspiration from a number of places including the landscape and a dream to be a famed artist like her grandfather some day.

Her works do not tell a story of her ancient dreamtime but were simply an expression of herself. Janelle had always said that she paints from within, acknowledging the freedom of her expression. She loved mixing beautiful colours, whether they were bright or pastel, or making a bold statement with black and white. She said that the colours of the bush and her environment were all of these colours.
When Janelle came to paint at Mbantua Gallery's workshop in March 2005 in Alice Springs, she told a story that she believes made an impact on her life. At the age of 8 or 9, she was riding her bike when she came across a rock that was full of colours. She continued to ride past, thinking of how beautiful it was and decided to go back and have a better look. When she went back she couldn't find it and still thinks of it to this day because she knew she wanted to become an artist one day and paint something just like that.

One of Janelle’s most recognized designs was that of the desert sand hills. Inspired by their shape, Janelle depicted them as contemporary designs and was able to create both subtle and electrified representations. Other well recognized designs that followed were her Thirsty Lands series, Dancing Bird Spirits and Fire Sparks. Other styles that reflected Janelle’s aptitude for contemporary art included coloured acrylics that were poured onto the canvas directed by Janelle's hand or left to drip down after the canvas had been hung on a clothesline; a dump-dump style where small brush dots were integrated with each other; ringlets of colourful swirls that were applied with a brush as if it were a ballerina dancing across the canvas; and concentric circles and other designs that were applied by hair dye bottles (emptied and filled with acrylics).

Janelle was keen to become one of Australia’s top artists. From the moment her new designs surfaced, her work was admired by many and featured in many exhibitions. In April 2005 Janelle had her first solo exhibition, in May 2006 she visited Sydney for the first time for an exhibition featuring her sand hill paintings and her work has been shown throughout the USA. Sadly Janelle's life was cut short in a road accident in Central Australia in 2009 but her paintings remain her legacy.
Collections

JANELLE STOCKMAN (c1980 - 2009), Original Acrylic Painting on Linen, Title: Bush Seed, Signed Verso, Accompanied by a Certificate of Authenticity and Photograph of the Artist with the Work 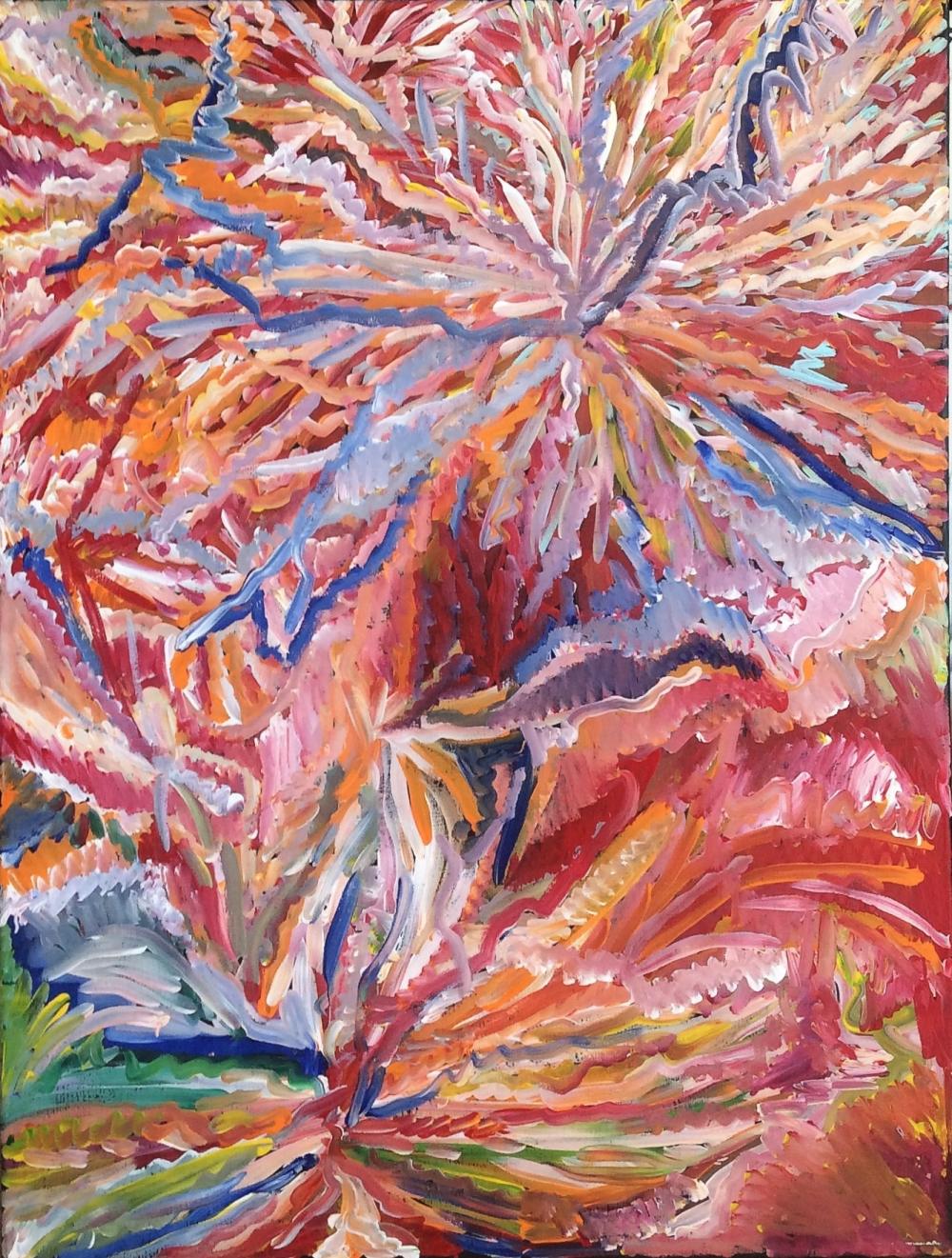