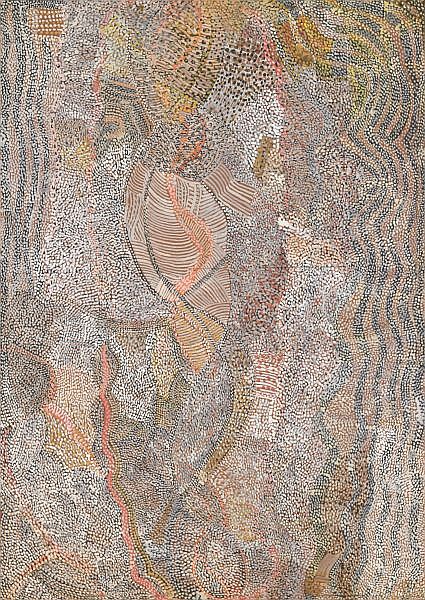 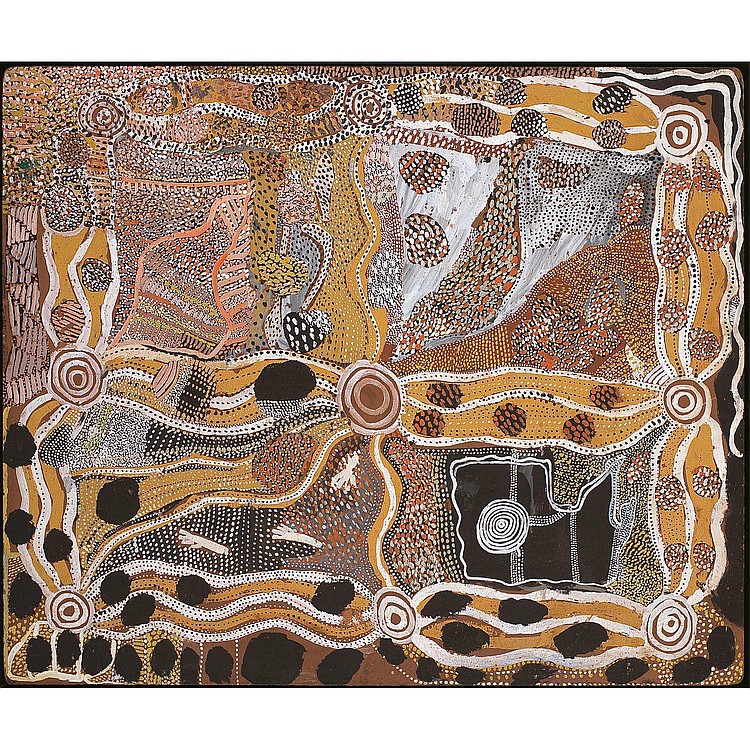 Johnny Warangkula Tjupurula was born in 1925 at Minjilpirri, an area north west of Illipili and south of Lake Mackay. Close by is his major dreaming site Tjilkari. The son of mixed parents, his mother was of Luritja/ Warlpiri/Pintupi descent and his father Luritja/Warlpiri. Johnny was raised in a traditional manner, living an orthodox life style in the desert and never attending European schools. He is of the Luritja language group and was initiated into manhood and learned his dreamings during his family's stay at a mission in Hermannsburg.

Johnny can recollect his first contact with Europeans, remembering his fearful response when witnessing an aircraft fly over his land as a young boy. His people believed the airplane to be a 'marnu' or devil. At a later date, his people came into contact with camels for the first time and again hid in fright as they recognised the beasts as being evil.

His painting career began after a long turn at laboring, his efforts contributing to the developments of roads, airstrips and settlements in areas such as: Haasta Bluff, Mt Leibig, Yuendumu and Mt Wedge. In return for his work building roads, shoveling dirt and felling trees he was remunerated in the form of consumable goods, 'tucker' (as he calls it) flour, tea, sugar, fresh vegetables and tobacco.

All of that is a far cry from the sophisticated auction rooms of Sotheby's in Melbourne where, in July 1997, his painting 'Water Dreaming at Kalipinypa' changed hands for a record $206,000. When he sold the painting at Papunya 25 years previously he received just $150 and remembers this only in terms of the food which it bought at the time.

Interviewed in 1997, Johnny claimed; 'I come from the bush. We don't know money'. From partial obscurity, 'Johnny W', as he is affectionately known, became a figure to be reckoned with in the history of Australian art. Well before that time, however, the National Gallery of Australia had recognised his position in the scheme of Aboriginal art. In 1984, James Mollison, Director of the gallery claimed that their painting by Johnny W (the gallery's first purchase of a western desert painting) was 'the finest abstract art ever produced in this country'. .

Johnny Warangkula Tjuppurulla's painting career began after a long turn at labouring, his efforts contributing to the development of roads, airstrips and settlements in areas such as Haasts Bluff, Mt Leibig, Yuendumu and Mt Wedge. In return for his work building roads, shoveling dirt and felling trees he was remunerated in the form of consumable goods, 'tucker' (as he calls it) - flour, tea, sugar, fresh vegetables and tobacco.


Before the bulk of the Haasts Bluff population was moved to Papunya in 1960, Johnny was selected along with Nosepeg Tjupurullaas Aboriginal representative to meet the Queen. After settling in Papunya Johnny served on the Papunya Council with Mick Namarari (qv), Limpi Tjapangati and Kingsley Tjungarrayi.

Geoffrey Bardon's arrival at Papunya inspired the community to begin using western art materials. Johnny rapidly developed a distinctive style of his own which came to be known as 'overdotting'. He uses several layers of dots to depict his dreamings, which consist of Water, Fire, Yam and Egret stories. There are also stories from Nyilppi and Nyalpilala which are his father's Dreamings. Geoffrey Bardon labeled this stylistic layering effect as 'tremulous illusion' and in his book, Papunya Tula Art of the Western Desert. Bardon fondly recollects images of Johnny painting with an "intense level of intuitive concentration".

From the very beginning at Papunya, Johnny has always adhered to the idea that his paintings are stories - Aboriginal stories. He has never allowed any infiltration of European influence and rarely uses literal depictions of objects. Geoff Bardon advised the 'painting mob', of which Johnny was an important member, to paint in an Aboriginal way using Aboriginal signs and symbols that one might have found in body paint, tjuringa or sand paintings. Because of this 'purity' his works retain an integrity which places them amongst the most significant productions from the seminal art site that was Papunya.

Bardon pointed out that Johnny's paintings, 'can be measured on a scale of modern aesthetic'. And as if to qualify that remark, Bardon further offered the idea that the artist used, 'calligraphic line with almost Baroque excitement'. A very insightful observation which holds true in 1999, particularly in regards to the very 'late' and hugely energetic works of this period. One of the great characteristics of the Baroque style, dominant in the seventeenth century, was the energy, rhythm and theatricality with which stories (usually Christian stories) were told. Johnny's style was described this way: Tight organization of bands and lines, hatching and dot embellishment give his work a powerful, energetic visual strength. He uses convoluted spiral symbols for people, and animal tracks and distorted figures as illustrations of ceremony not in a formal way but intuitively.

In early 1997, Michael Hollow made a great effort to revive Johnny's painting career and commissioned him to do a series of small works. From this series Johnny began a new phase in his distinguished painting career and developed this new direction with other galleries and dealers over the next few years. This series, perhaps his final one due to failing health, includes a range of small to very large dynamic, powerful paintings in pure red, blacks with white, yellow and ochre highlights. Each of the works features the established imagery of Johnny's Dreamings overpainted to hide the secret and sacred elements. These works have evolved slowly over an eighteen month period during which time the artist has displayed once more his mastery of this unique form of art and storytelling. These important late works are made despite failing eyesight and poor health.

It may seem ludicrous to draw parallels between this Aboriginal painting master and Monet in their corresponding last years. However one cannot help noticing those similarities. Further, Johnny's technique and brushwork bear an eerie resemblance to the techniques invented and employed by Monet in his late waterlilly paintings at Giverny. This may only prove that the mark-making we call art is a basic expression of the human spirit as one mind strives to communicate with another in visual terms. The Frenchman Monet was inspired by his Japanese watergarden - Warangkula by his birthright - his ancient dreamings.

From 1999 Johnny painted with a new-found freedom, both in expression and in painting technique. Where he was once known for his delicate and soft white dotting, he attacked the canvas to tell the story with great gusto. He jabbed large dots on to the surface and produced roundels and symbols for weapons with great sweeps of his arm and the brush. Red, black, white.

Had he painted in France during the 1950s he would have been labeled a 'Taschist'. The audience who saw his paintings at the United Nations Building seemed generally to agree that Johnny was indeed a significant artist who in some sense retained an authenticity and timeless importance in his work that some of the younger painters were yet to achieve. All great painters, past and present, seem to have an additional level in their work which may defy description. This evasive quality is sometimes born of the synthesis achieved between colour, form, texture and meaning. When viewing paintings by Johnny Warangkula Tjupurulla we find ourselves in a position where the recognition of another elemental level is tantalisingly close and for a lucky few the spirit is moved beyond words. In the presence of great visual art, the employment of everyday language can become a futile and unproductive gesture. 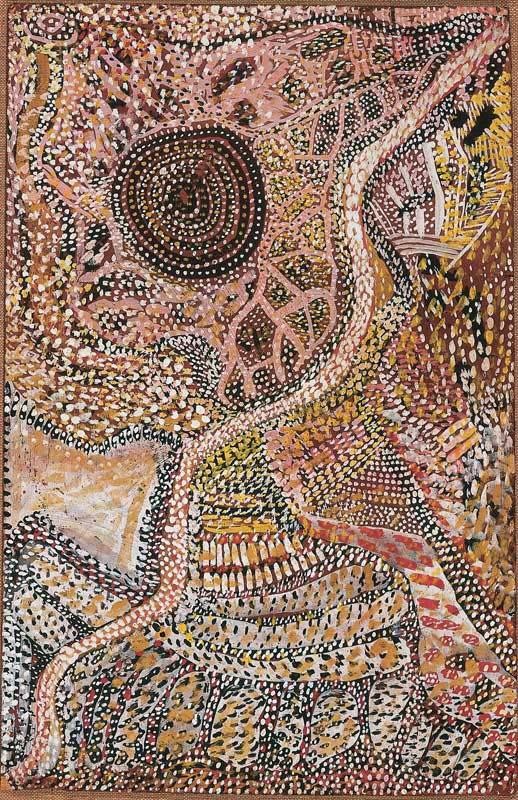 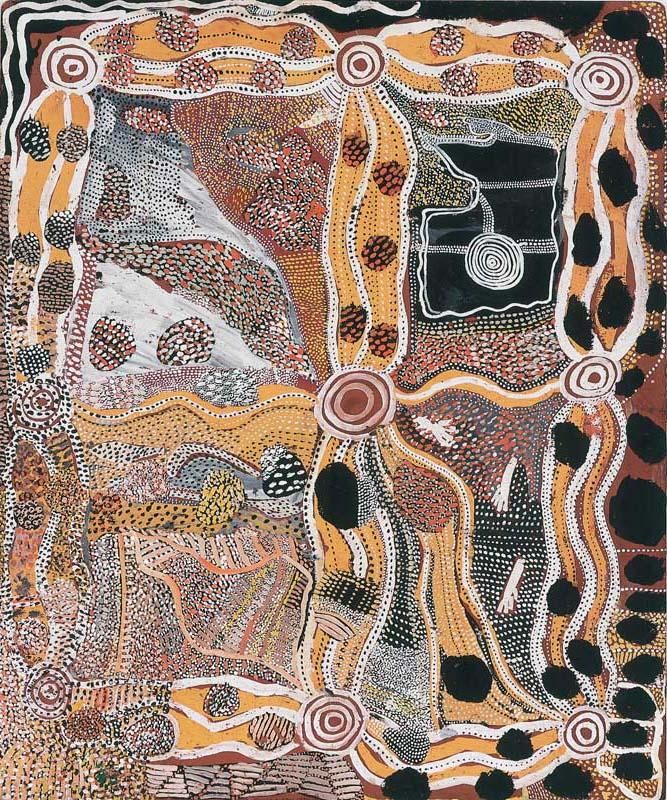 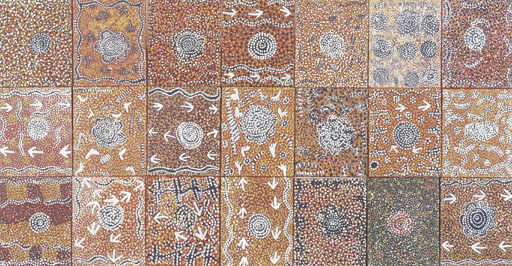 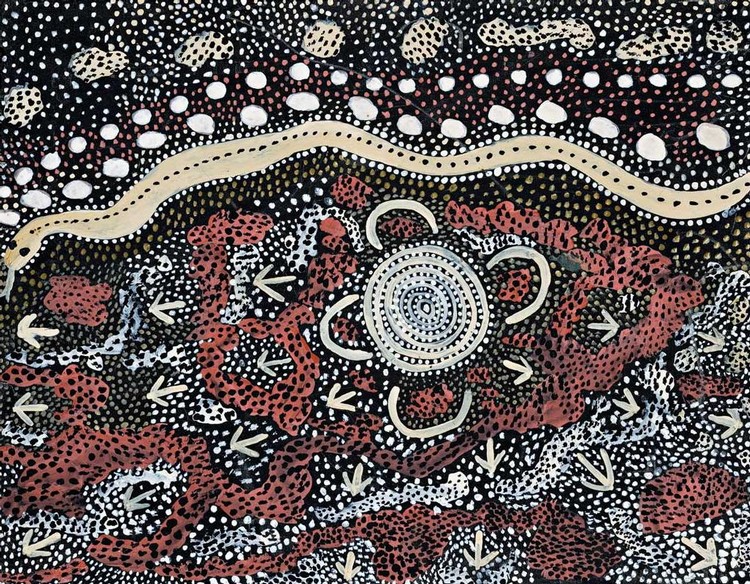 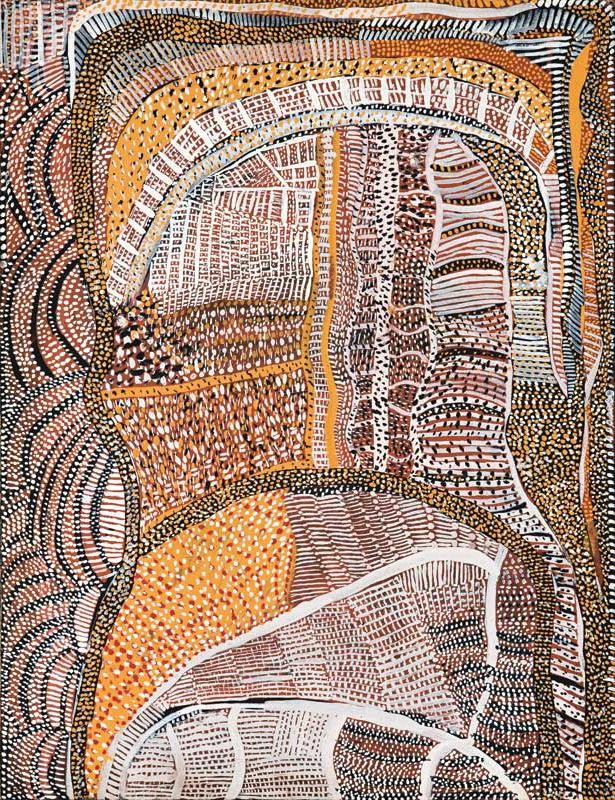 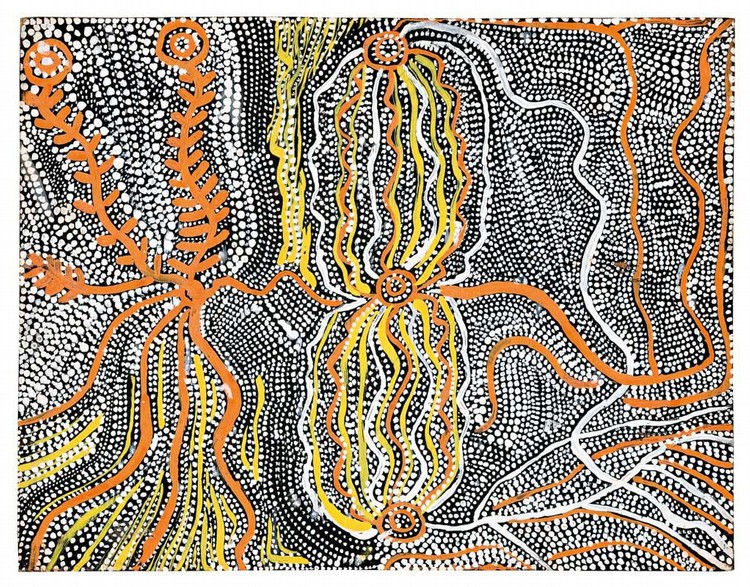 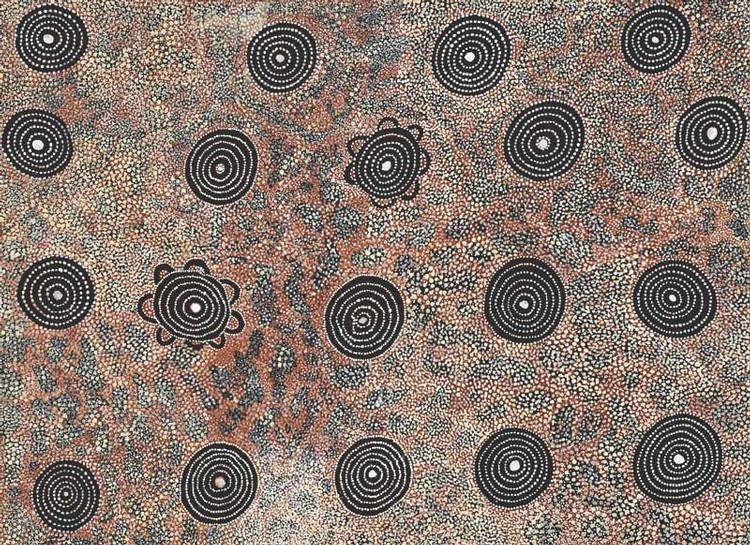 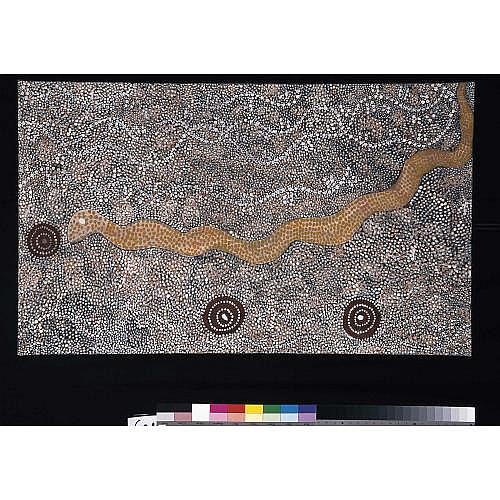 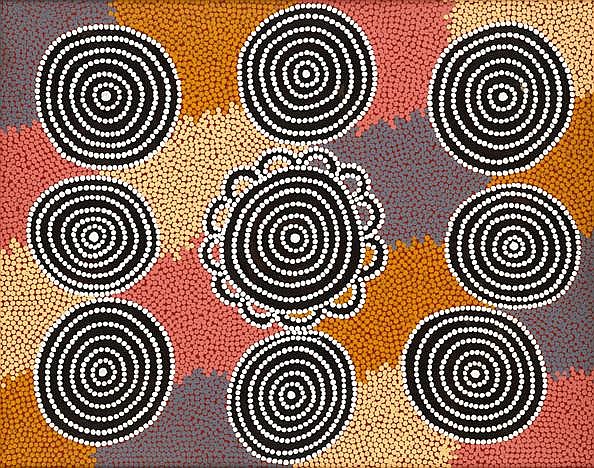 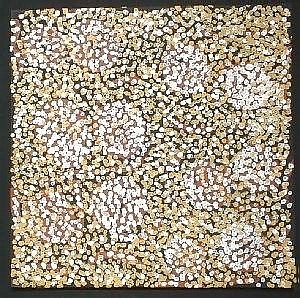