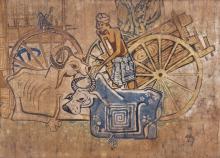 Description: Two cows at rest, facing each other, while the wooden bullock cart usually harnessed to their necks, is slanted with the front side as a fulcrum. The 12-spoke wheels, with one spare on the left, are symbolic of the Hindu Dharmachakra with its principles of duty, work and righteousness. A cockerel perched on the spare wheel perhaps rings in the new day, and that may explain the cows’ nonchalance as their turbaned minder clad only in a folded sarong tries to coax them to the call of duty. He is a kind master. The Hindus revered the cows as sacred. The composition is suffused with a sluggish temper, what with the sparing colours of light yellowish tints and pale brownish hues. This scene is typical of the immediate post-Independent Malaysia, with an incipient agrarian economy and woefully lacking in urban infrastructure still. The image of this work adorned the front page of his catalogue of his first solo exhibition at the Penang Library in 1969. This is typical of the early batiks of Koay Soo Kau, who learnt the basics from Lee Joo For at the Regional Training Centre in Kuala Lumpur in 1965. “Art, like life, should constantly be on the move and never static. You need to explore different things,” he had said. Artist-activist-gallerist Koay Soo Kau innovated a kind of negative-film template in his early batiks but is best known for his Nusantara series with a panoply of organic and geometric regional designs in the 1980s and 1990s. The emblematic tapestry is not displayed scroll form but like Stella-like shaped canvas. He then moved into Realist Surrealism featuring fruits in oil and later Social Realism figures. Soo Kau had a career as a teacher in Kedah and then Bukit Mertajam before starting a gallery called Galeri Seni Mutiara in 2005. In April 2019, he held a major solo called Yesterday And Today, featuring 24 of his oil and batik works since 1965. It was his 26th exhibition, and he had solos in Bangkok (Petchburi Gallery, 1975) and Sydney (Norfolk Gallery, 1977). It has been six years since his 1979 batik work, Urbanisation, sold at the Henry Butcher art auction (November 2014) for a premium of RM6,720.... 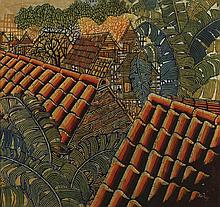 Appearing at Henry Butcher Art Auctioneers auction for the very first time, Koay Soo Kau is no stranger to the local art scene. He has been painting batik since the 1960s and has today evolved into creating whimsical and surreal still life oil paintings. On offer here is an early batik piece illustrating a rooftop view of a village scene. Intricate outlines of rooftops amidst lush banana tree leaves indicate a peaceful day in the village on a sweltering hot day on the island suggested by the warm yellow and orange dye.

Koay Soo Kau obtained his art education from Teacher Training College (1966 - 1967). He has held numerous solo exhibitions since 1969 with seminal shows displaying batik art and oil paintings titled Metamorphosis held in Penang in 1997 and Metamorphosis II in Kuala Lumpur in 1999. He has also participated in a number of group exhibitions locally and abroad namely in Sydney, Australia (1972); Abu Dhabi, United Arab Emirates (1998); Japan (1999) and many more. He was Chairman of Penang Teachers' Art Circle (1993 - 1997), Secretary of Penang State Art Gallery (1995 - 1999) and an advisor of Penang Teachers' Art Circle (1998 - 2000). He is currently Director of Galeri Seni Mutiara in Penang.
...