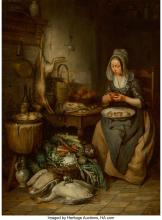 On Prince Albert's 25th birthday in 1844, his wife Queen Victoria of England presented him with this beautiful painting of a kitchen maid peeling apples by the Belgian artist Charles van Meer (1810-1868). The painting, entitled The larder, bears Albert's personal collector's mark, PA surmounted by a crown, on the reverse of the panel.

Prince Albert was an avid art collector not only of historical but contemporary art, of which this work by van Meer, dated 1844, is a particularly fine example. Van Meer's paintings were prized for their meticulous craftsmanship, and the artist's ability to render the variety of textures on full display in the present panel. The painting has the quality of a Dutch 17th-century Golden Age effort. It is just as much a still life as it is a genre subject, with gleaming copper pots and a cornucopia of vegetables of every variety at the serene young woman's feet.

As someone keenly sympathetic to the plight of the lower classes, and who in his official role as Consort instituted, for example, a pension plan for servants who previously would have been abandoned by the royal household in old age, Prince Albert was particularly fond of works of art depicting working class or domestic subjects. Van Meer's presentation of this young scullery maid with her fresh face and neat costume conveys a feeling of nobility of purpose, as though she's a queen in her own domain. The image must have been irresistible to Queen Victoria, knowing her husband's mind as she did.

Following Albert's untimely death in 1861, the painting remained among the Queen's personal property (so indicated by another stamp on the reverse) until her own death in 1901, when it was given to Princess Christian of Schleswig-Holstein (Helena), Victoria and Albert's third daughter. The painting emerged on the art market during the 1960s, when it passed out of the hands of Princess Helena's family.

We are grateful to Isabella Manning, Assistant to the Surveyor of The Queen's Pictures, Royal Collection Trust, St. James' Palace, London, for kindly providing the particulars of the royal provenance of this painting.

Description: Portrait of a Sea Captain, signed lower left. O: 22 x 32 in and S: 11.5 CONDITION - By registering to bid for this auction (either in-house or online) and/or placing a bid in this auction. The BIDDER/BUYER agrees to all the terms and conditions of Sarasota Estate Auction. - All silver, gold and/or jewelry lots MUST be paid for via wire transfer or cashier?s check upon receipt of invoice, no other forms of payment will be accepted. - We recommend looking into shipping quotes prior to bidding. A list of local shippers is available upon request - All sales are final; no refunds will be given under any circumstances. - Sarasota Estate Auction can provide condition reports as a courtesy to our clients and assumes no liability for any error or omission. Conditions or Descriptions are opinions of our staff and should in no way be construed as a guarantee of any kind as to age, condition, mater. The bidder assumes responsibility for ensuring that the condition of the item(s) meets with their satisfaction prior to bidding. The absence of a condition statement does not imply that the lot is in perfect condition or completely free from wear and tear, imperfections or the effects of aging. - Online images can sometimes be low quality due to the uploading process, original high-resolution images can be requested via email at [email protected] Size: O: 22 x 32 in and S: 11.5... 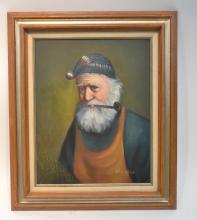 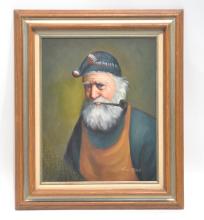 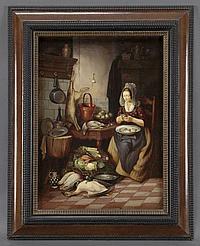