Rose Naftulin(1925-2005)
Who is Rose Naftulin?
Rose Freedman Naftulin, 80, of Wyndmoor, an artist whose densely colored paintings were often exhibited at local galleries, died of cancer Sunday at home.

Mrs. Naftulin, who had painted since childhood, became passionate about her art after her beloved husband, Morton, died in 1977, their daughter Nancy said. She converted her husband's home office into a studio with sliding glass doors open to western exposure that offered "gorgeous sunset skies," Mrs. Naftulin once told a reporter.

Mrs. Naftulin made three trips to Giverny, site of Claude Monet's garden in France - painting there and later from slides. She was also influenced by Matisse and described her work in 2002 as "two degrees away from abstraction."

In September 2004, doctors told her she might have as little as two months to live, her daughter said. Mrs. Naftulin defied their expectations and lived long enough to attend the opening of a retrospective of her still lifes and landscapes last spring at Woodmere Art Museum in Chestnut Hill, to celebrate her 80th birthday, and to paint on the beach at the Jersey Shore in August. She was too sick, though, to attend the Dec. 7 opening of the show of her paintings celebrating 25 years of exhibiting at Gross McCleaf Galleries in Center City, her daughter said.

Mrs. Naftulin grew up in North Philadelphia and attended art classes at the Graphic Sketch Club, now the Fleischer Art Memorial. After graduating from Olney High School, she took a drafting job for an engineering firm in Philadelphia and studied at the Philadelphia College of Art at night.

At 19, she married Morton Naftulin. She said in 2002 that when her three children were growing up they complained that "I was always behind a locked door, painting. But it got to them," she said. Her son, Louis, is an architect, daughter Nancy is an interior designer, and daughter Elise is an art teacher.

In the 1950s and '60s, Mrs. Naftulin took classes at the Cheltenham Art Center and at the Barnes Foundation. Her paintings are in collections at Bryn Mawr College, the Free Library of Philadelphia, and in museums around the country.

Besides her trips to France to paint, she won a fellowship in 1996 to paint in Ireland. While there, she broke her right arm and learned to paint with her left, her daughter said.
Show More 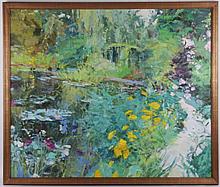