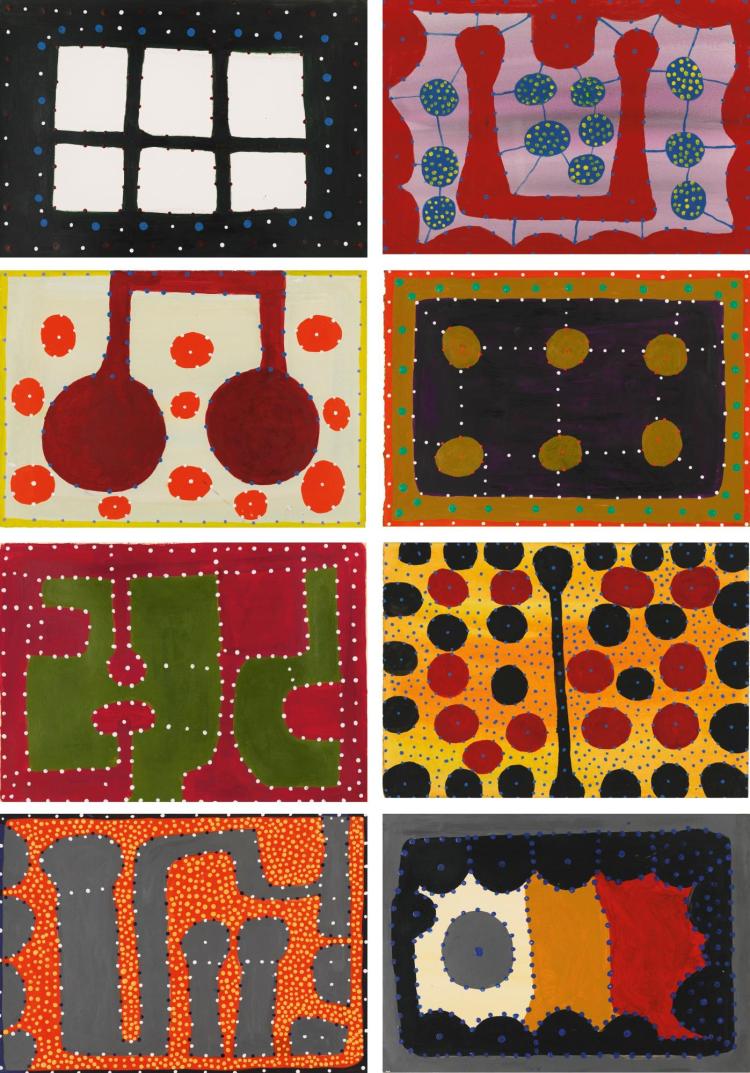 Ngarra was born around 1920 in the bush near Glenroy Station in the central west Kimberely region. Orphaned as a young boy, he was put to work on the stock camps, mustering donkeys, mules and horses. After receiving a harsh beating from one of his relatives, Ngarra fled the station to find his maternal grandfathers Muelbyne and Larlgarlbyne. These old men, or mananambarra as they were referred, had not reconciled with the pastoral industry. Speaking Andinyin and Kitja, they lived traditionally in the mountain country, upholding their traditional customs, laws and ceremonies.

Muelbyne and Larlgarlbyne imparted to Ngarra their knowledge of bush survival and schooled him in the ancient philosophies, law and mythology of his people. This education sharply contrasted with Ngarra’s contemporaries, who were living on the stations and learning the skills of cattlemen. The teaching of the old men made Ngarra one of the most important ceremonial leaders of his generation. Until recently, when he declared himself ‘too old for the job’, Ngarra was the senior manambarra for ceremonies throughout a vast stretch of the Kimberley. Speaking on Ngarra’s importance, the late artist Timmy Timms declared “This Ngarrangarri standing up here, if him bin Catholic, then him Pope and everybody gotta bend at the knee.”

As a young man hoping to get married Ngarra chose to rejoin his station kinsfolk. Beginning what was to be a long and successful career as a cattleman, Ngarra’s bush skills made him a master stockman and drover. During the break from station life imposed by the wet season, Ngarra would walk the country with his fellow workers and lived a traditional nomadic life, attending to the ceremonies of life, death and the afterlife.

In 1994, Ngarra made a simple proposition to his old friend, anthropologist Kevin Shaw; “I want to become a big artist.” Despite Shaw’s protestations that “I don’t know anything about art”, Ngarra was insistent, telling him “Well, you had better find out.” The pair embarked on a 1600 kilometre four-wheel drive journey to collect ochre from places that Ngarra had visited on foot and on horseback more than twenty years before. With Ngarra’s extensive bush knowledge they were able to collect over twenty separate colours. Later, Ngarra reflected with pride, “I had 23 Kimberley bush ochre colours. Most people only know five or ten bush ochre colours.” For his first works, Ngarra used this broad palette to decorate traditional wooden bowls known as kudi. These kudi were designed along two sets of principles: the first being decorated in the ‘old style’ taught to him by Muelbyne and Larlgarlbyne, and the other bearing innovative designs that revealed Ngarra’s earliest transformations of his knowledge of the Ngarrangkarni (Dreaming), country and mythology into visual imagery.

When age and illness made collecting and grinding ochres too difficult, Ngarra switched to acrylic paints, where he immediately shone as a master colourist. Ngarra colour-mixed his own paints to produce an endless and stunning array of colour combinations. His dedication and integrity to both his art and culture inspired his peers and Ngarra became a formative influence on several artists including Mick Jowalji and Jack Dale.
Ngarra_Stars and Moon Phases

A lifelong smoker, emphysema and the weariness of age gradually restricted Ngarra’s movement and forced him to retire from painting in 2002. A lifelong perfectionist, he felt frustrated at his physical inability to make his paintings “clean and lively.” However, it was not long before he returned to his art practice, but his fragile health dictated that he restrict himself to producing small, delicate works on paper. He made the medium his own, and this late revival represented a second flowering in his career as a painter. In the final four years of his life, Ngarra devoted most of his waking hours to his works on paper, producing his most sustained body of works.

Ngarra’s paintings transform elements of his traditional culture and life into compelling visual and political statements. To Ngarra, painting presented both a personal and political mission to record his “really bush contracts” in the face of corporate development and the disappearance of traditional culture. And yet, they are equally defined by their visual inventiveness, their humour and wit and their joyful sense of experimentation. Ngarra’s privileged cultural position meant that he felt free to innovate and adapt his imagery for visual or allegorical effect. When asked to describe the motivation behind one of his paintings, he disarmingly replied, “I’m just fucking about to see what the idea looked like.”

Ngarra was a unique individual: an artist whose work spoke of ancient knowledge systems, whilst maintaining an entirely contemporary vision of artistic experimentation and innovation. As Shaw noted, he was “one of the few remaining people on earth who lived through the superimposition of pastoral capital over the hunter-gatherer way of life.” This very fact gives his work a historical and cultural significance that is yet to be fully appreciated. But one cannot overlook the singular artistic vision that is reflected in his works, which sparkle with the fire of artistic experimentation. On 1st November 2008, Ngarra died peacefully in his Derby home from complications secondary to pneumonia. He left the world with a body of works whose power may take several generations to truly comprehend.