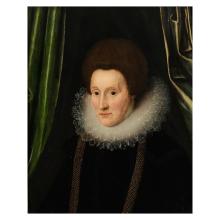 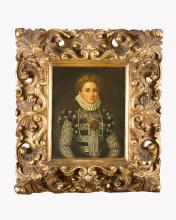 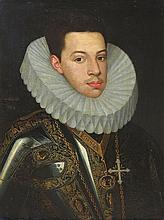 Description: PANTOJA DE LA CRUZ, Juan (1551 - 1608). Portrait of Prince Felipe Emmanuele (1586 - 1605) of Savoy, half length, wearing the badges and orders of the Annunziata and St. Mauricius and Lazarus. Madrid: 1604. Oil on canvas. Signed and dated center left: 'Pantoja de la + / 1604" and with inventory number lower right: 52686. Canvas size: 24 7/8 x 18 1/2 inches; framed size: 33 1/4 x 26 1/2 inches. The young, sweetly smiling face of the sitter, captured in remarkable detail, almost appears mismatched with the imposing suit of armor he wears for his portrait. Taken just one year before his tragic death at age nineteen, this half-length portrait of Prince Felipe Emmanuele of Savoy is one of few in existence of the would-be Duke of Savoy. Painted by the artist Juan Pantoja de la Cruz, the primary portrait painter to the royal family of Philip II and Philip III, the artist is of signal importance to the Mannerism aesthetic of portrait painting. Pantoja followed the Spanish tradition of Royal Portraits, initiated with the famous portrait of Charles V by Titian, a copy of which, made by Pantoja, is at the Escorial. Antonis Mor, Alonso Sanchez Coello and Pantoja himself continued the tradition. Though Pantoja?s work was often severely criticized by historians who were prejudiced against non-Italian portraiture, in his best works Pantoja achieved a level of sophistication with powerful contrast of light and shadow. His portraits are noted for the meticulous detail of the intricate embroidery of dresses and jewelry designs, and, as evidenced in this work, elaborate armor. The subject is usually portrayed standing against a dark background, with the face and hands depicted with a more flat and subtle technique. Among his most well known works is the portrait of Philip II wearing a cape and hat all in black, painted around 1594 for the Escorial. This portrait is one of the best representations of the idea of Spanish majesty, based on the remoteness of the monarch. On Philip II's death in 1598, Philip III confirmed Pantoja's status as court painter. When the court settled in Valladolid in 1601, Pantoja moved to the new capital, remaining in this city for several years. The subject of this painting, Felipe Emmanuele of Savoy, was the eldest son of Carlo Emmanuele, Duke of Savoyand the Infanta Dona Catalina Micaela of Austria, daughter of King Philip II of Spain. Felipe Emmanuele died unmarried in 1605, just prior to his nineteenth birthday. With his death his younger brother Vittorio Amadeo succeeded his father as Duke of Savoy in 1630, having married Princess Christina (1606-1663), daughter of King Henry IV of France, on February 10th 1619. There is a three-quarter length portrait of Felipe Emmanuele in Bilbao, Museo de Bellas Artes.... 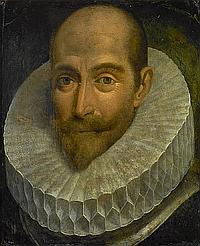 Lot 26: Property from the estate of Martin B. Retting 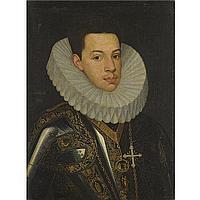 Description: Studio of Juan Pantoja de la Cruz
Spanish, 1551-1608
A Portrait of an Elegant Lady in a White Ruff