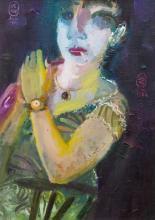 Description: Sindudarsono Sudjojono (1913-1985), A portrait of 'Tante Sun, Our Aunt Sun', signed 'S Sudjojono', and signed with initials, numbered, annotated and dated 'SS/101/Jak /1982' (centre right); signed with initials, numbered, annotated and dated 'SS/101/Jak /1984' (upper left), oil on canvas, mounted on board, 68x48 cm, Provenance: -Private collection the Netherlands. Sudjojono (Kisaran 1913 – Jakarta 1986) Heralded as the father of Indonesian modernism, Sudjojono can be seen as both a painter and a socio-political observer. His career spanned four tumultuous periods: Dutch colonialism, the Japanese occupation, Indonesian independence and the so-called New Order Regime under Suharto (1966-1998). Sudjojono was born in Kisaran, North Sumatra in 1913. His Javanese father had emigrated there and met his mother at the plantation where he worked as a laborer. At the age of four, he was adopted by a primary school teacher, Yudhokusumo, who brought him back to Java in 1925 where he went to school in Jakarta, Bandung and Jogyakarta. Although he was educated to become a teacher, his interest and talent in art made him decide to pursue a life as a painter. Sudjojono first learned to paint from the painter Raden Mas Pirngadie (1875 – 1936). During the Japanese occupation (1942-1945), he met the Japanese painter Chioji Yazaki (1872 – 1947). Already prominent by the 1930s, Sudjojono was urged by Sukarno, the first president of Indonesia, to help develop the Indonesian artistic identity. Sudjojono took this challenge to heart and his opinion and point of view developed over the years. It culminated in 1946 with the publication of “Seni Lukis, Kesenian dan Seniman (Painting, Art and Artist),” which was a collection of his thoughts and writings since 1939. Over the course of seven years, he tried to formulate, describe, and persuasively communicate his ideas about the Indonesian national artistic identity. He insisted that Indonesian artists develop their own flavour. It was self-innovation in art that he emphasized. He was not against mooi indies, or western art, but rather stressed that by understanding the history and the development of the western artistic journey, Indonesian artists could learn and develop their own artistic identity. His main idea was to inject the elements of contemporality into art, and offered the socio-political lens as a source of artistic discovery and innovation. In 1939, he wrote: “… They (Indonesian artists) shall create a new, enthusiastic and impetuous visual arts in the service of truth; leaving behind the past and they shall live today to create a better world of tomorrow. They shall not just depict idyllic huts, bluish mountains and romantic corners … they shall also paint sugar factories and the emaciated farmers, the automobiles of the wealthy and the long trousers, the shoes, gabardine trousers and shirts of tourists on the paved road. Because those are our circumstances, thus is our reality. And a visual art that brings this reality to life – that does not derive its beauty from ancient traditions, Majapahit or Mataram or from the ideas of the tourist, such an art will live as long as the world shall exist. Because high quality art comes forth from daily life. It is produced through the artist’s inner life, which is inseparably bound with his daily surroundings. Art that is created without taking morals and tradition into account, without a definite goal, motivated only by an inner force.” [1] During the New Order Regime under Suharto (1966-1998) social and political freedom and dissent were suppressed. The focus on accelerating the modernization and industrialization of Indonesia inevitably brought the introduction and adoption of Western capitalism. The boom of the national development programs and the rapid progress in the building of the modern Indonesian economy produced widening socio economic gaps with outsized benefits for the privileged few. During this era, to avoid censures, most Indonesian artists refrained from criticizing the powerful regime through art. In fact, many artists developed total abstraction as a way to express their artistic freedom, creating contemplative abstract paintings devoid of recognizable figurative elements that might be interpreted as political statements. However, unlike many of his contemporaries, Sudjojono remained faithful to his practice of painting; using the socio-political lens in producing his works of art. Current issues and national interests remained his sources for inspiration. Throughout his career, Sudjojono made numerous portraits, some of which were commissioned. The current portrait was painted near the end of Sudjojono’s life during the New Order regime. This was a time when unchallenged, exclusive (elitist) collusion flourished and was one of the pressing issues in Indonesia. Here he portrays an upper-class woman with glamorous jewelry, sitting on a wooden rocking chair and enjoying a cigarette. She conspicuously displays her wealth and power: a large gold necklace adorned with a large ruby, diamond earrings and large gold wristwatch. The depiction of this fabulously rich and powerful woman was a symbolic representation of what was going on at the time and in keeping with Sudjojono’s commitment to producing art viewed through his socio-political lens. Interestingly, this is the only known painting in which Sudjojono signed with his usual monogram twice: first at the right center margin (dated 1982) and second at the top left margin (dated 1984). This is very unusual, as artists commonly sign their works only at completion. It is unknown what changes were made, and the reasons that Sudjojono reworked the painting and finally finished two years later. The current lot, produced near the end of Sudjojono’s life, is of historical importance and shows that despite turbulent political times, Sudjojono always stayed true to his artistic identity. Reference: [1] S. Sudjojono, “Kesenian meloekis di Indonesia: sekarang and jang akan datang,” Keboedajaan dan Masjarakat, 6 October 1939. Adapted from a translation by Helena Spanjaard.... 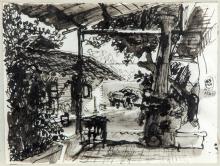 Description: Sindudarsono Sudjojono (1913-1985), Arcade and courtyard of the artist's house in Jakarta, signed with initials, numbered, annotated and dated 'SS /101 /Djak / 1971' (centre right), ink on paper, 27x35 cm, Provenance: -A gift from the artist to Roland van den Berg, Head of Cultural and Press affaires at the Netherlands Embassy Jakarta (1969-1973), on July 28th 1973, thence by descent. Annotation and signature of the artist and his wife: 'Secarik kenang2an Indonesia kepada keluarga Roland v. de Berg dari Rose dan Sudjono', (with memories of Indonesia, for the van den Berg family) signed by the painter and by Rose Pandanwangi , 'Jakarta, Pasar Minggu, 28 Juli 1973'. (written on the reverse),... 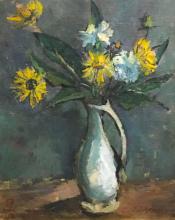 Description: Sindudarsono Sudjojono was born in North Sumatra, Indonesia, in 1913 and was a legendary painter. He was also an Indonesian nationalist, writer, teacher, art critic, and considered by some to be a political activist. He was dubbed “The Father of Modern Indonesian Art” and much of his art was an indirect political commentary on the struggles of the Indonesian people against colonialism. However, in this particular piece, Sindudarsono Sudjojono paints ‘Still Life Flowers’, with bursts of yellow and white petals attached to its stem that sits ever so comfortably in a tall white vase as they remain still in an eerie yet soothing room.... 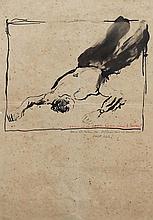 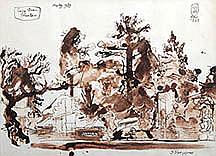 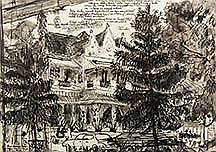 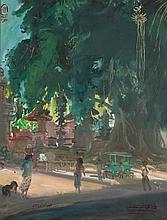 Description: Sindudarsono Sudjojono (1913-1986), 'Pagi di Bawah Beringin Tua' ('Morning Beneath The Old Banyan Tree'), signed, dated Bali 1980, canvas, 90 x 70 cm. Provenance: Mr. J.F Drijfhout van Hooff (1912-1993), head of the 'Loodswezen' (Dutch maritime pilot organisation). In the early 70's he lived with his wife in Jakarta and was advisor for the buoyage in the Indonesian waters. After 1973 they returned to Indonesia many times, for work and as a tourist. In these later years they bought this painting and kept contact with the artist and his familiy. See also the next lot....