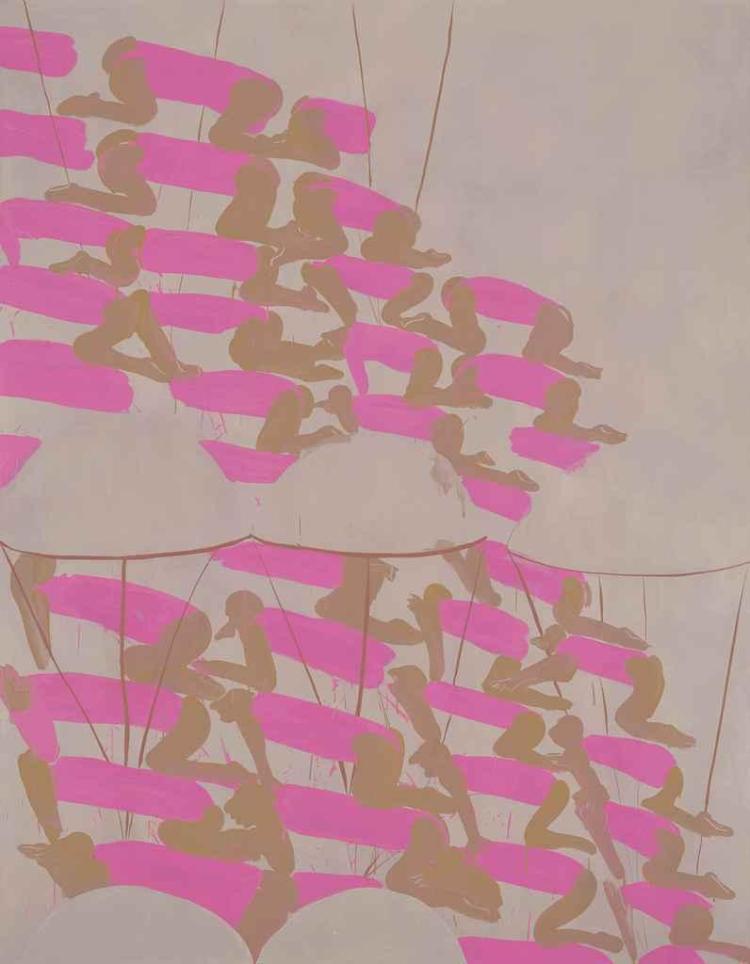 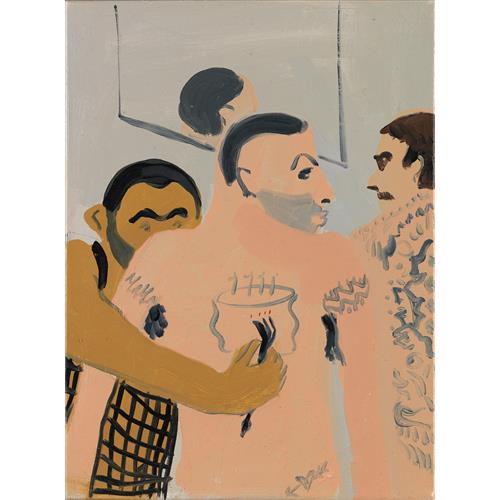 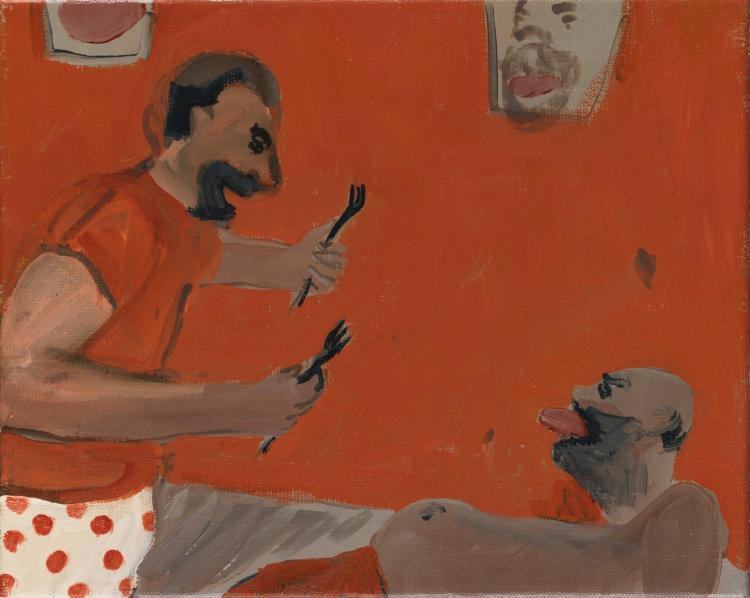 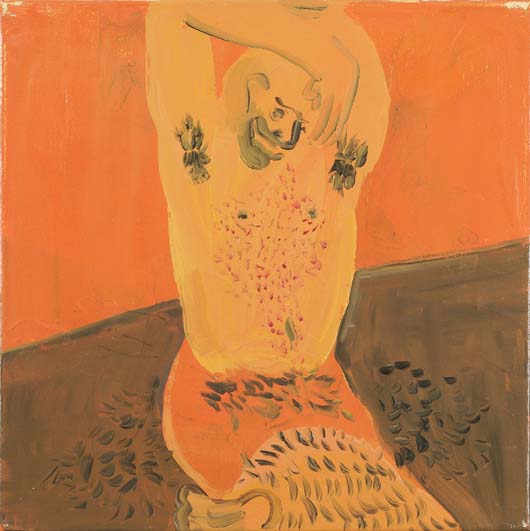 The Los Angeles-based artist Tala Madani is widely known for the irony and rich in narrative paintings that are made by using a bold and diverse palette of colors, together with loose brushwork. The more detailed and smaller pieces, as well as video animations, show the combination of violence, frustration, perversity, and playfulness in absurd scenes that contain bald, middle-aged men. The figures depicted are stereotypical and associate to certain political situations, while the symbols and imagery seen in her art provoke curiosity, fantasy, and imagination. The humorous discourse itself is related to cultural and sexual identity and traditional norms. Fictive rituals, homosexual orgies, terrorism, tattoos, and body hair extensions are some of the themes painted in her works.

The author was born in Tehran, Iran, in 1981, but she moved to the USA when she was 10. In 2004 Tala graduated political science and visual arts at the Oregon State University, Corvallis, while she earned MFA in painting from the Yale University, New Haven in 2006. Madani targets male subjects in child-like and simplified style, sometimes in humiliating, undignified, or shameful poses, thus reversing the position of the usual objectified female body in paintings. In this way, the conventional art and history are being twisted, especially the traditions that characterize Middle-Eastern culture and gender issues. The blunt inelegance in Madani’s drawings reminds of Morris Louis and Helen Frankenthaler.

Some of Tala’s characters wear stripes and so remind of Minimalist abstractions that turn to bodily fluids, leaving marks on a canvas. Madani also makes stop-motion animations, in which each video is consisted of about 2,500 quickly painted still images made in the same style and execution. They are all made sequentially on a simple piece of wood for a camera to record frame by frame. Some of her recent paintings include original illustrations from world-renowned Key Words Reading Scheme series, also known as the Peter and Jane books, named by the main characters. In her show called Smiley has no nose, the artist creates pieces that not only upend social mores but also initiate dialogue about cultural forms that remain in the background of collective awareness.

Madani was awarded the Catherine Doctorow Prize for Contemporary Painting in 2013, the De Volkskrant Art Award in 2012. Her works have been exhibited at the David Kordansky Gallery, LA, at the Lombard-Freid Projects, New York in 2007 and 2008, at the Pilar Corrias, London in 2011 and 2014, as well as at the Stedelijk Museum Bureau, Amsterdam in 2012. She has also held group shows at the Saatchi Gallery, London in 2009, at the The New Museum, MoMA P.S. 1 and Whitney Biennial in New York, at the Bristol Museum and Art Gallery in 2013, or at the Hammer Museum, Los Angeles in 2014, among many other places.

She lives and works in Los Angeles, USA 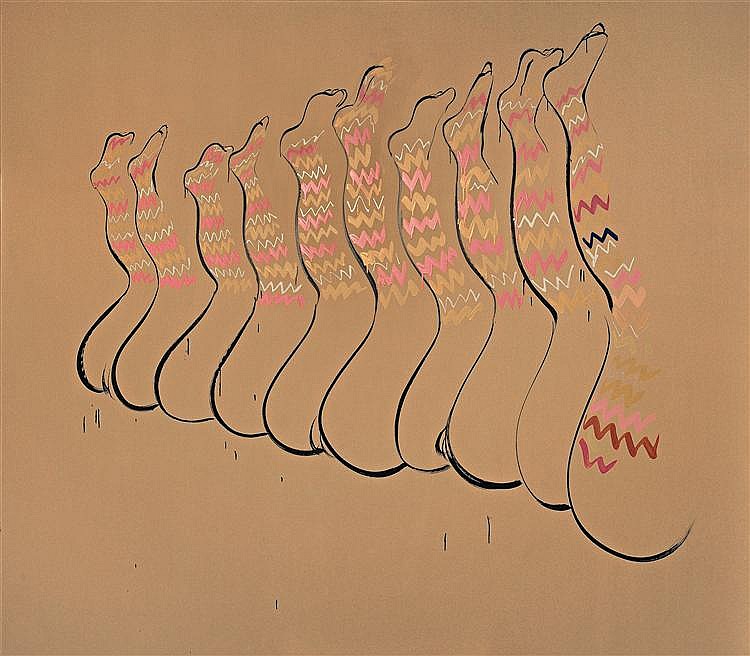 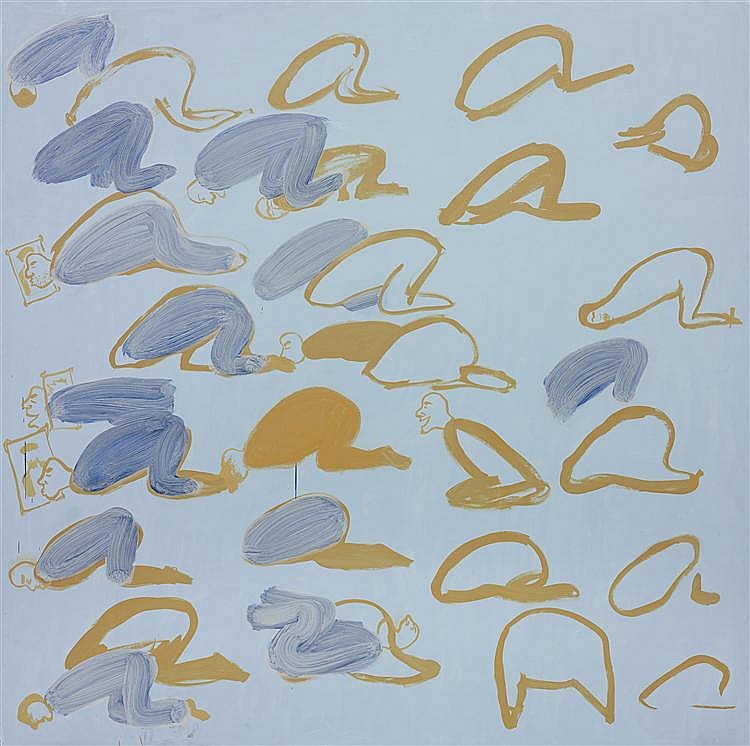 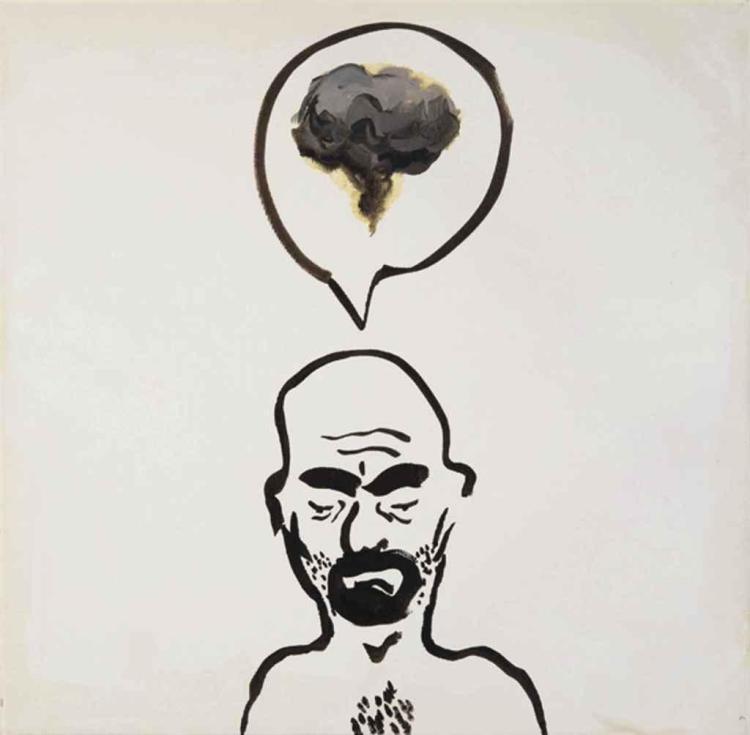 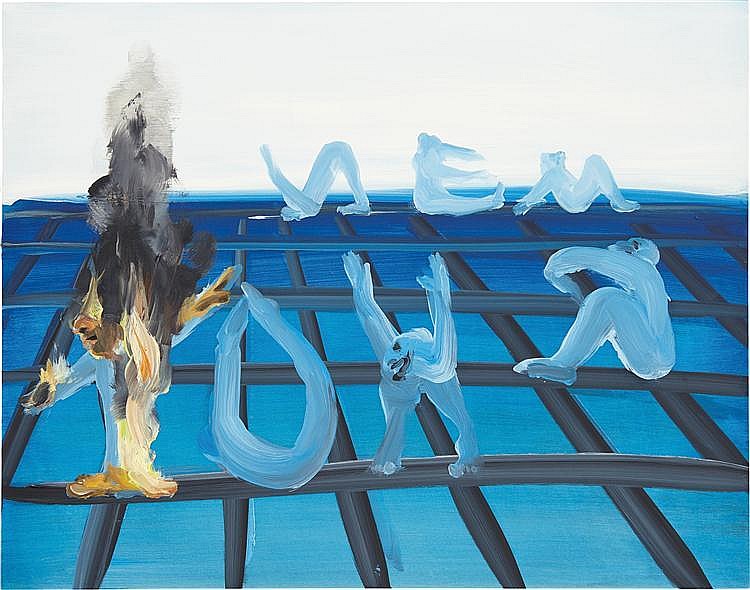 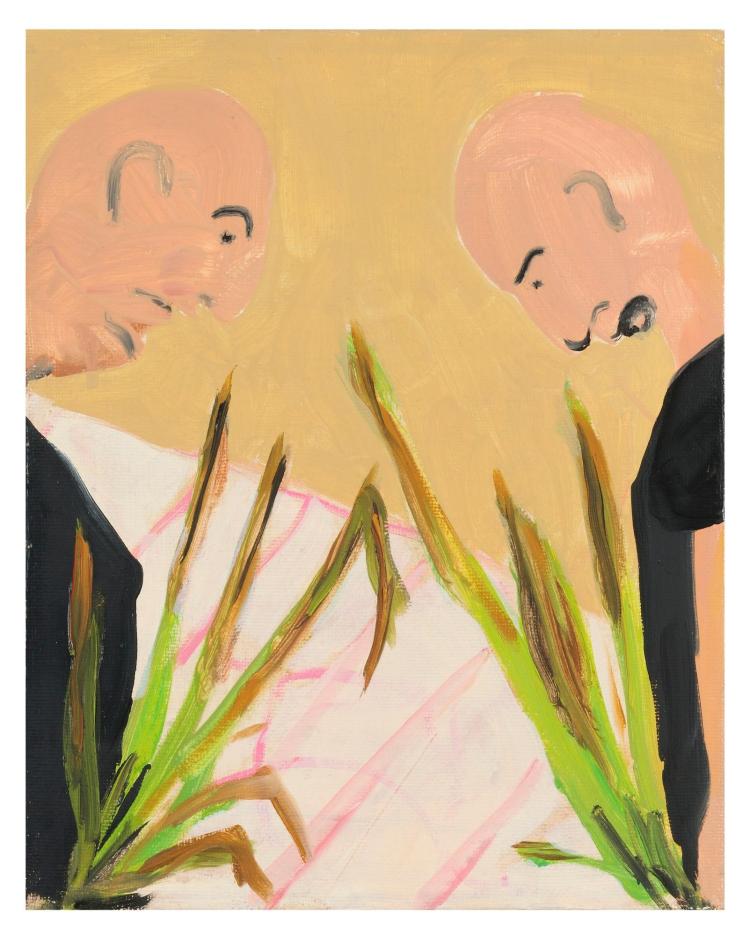 Tala Madani (B. 1981) Two Pillows and a Bolster oil on canvas 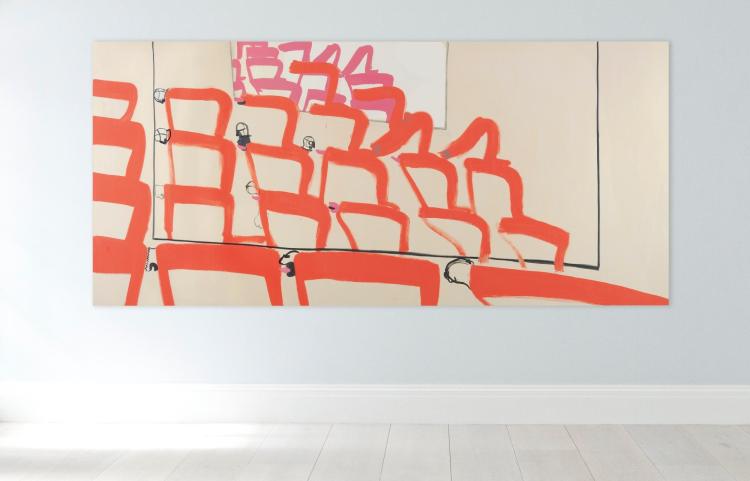 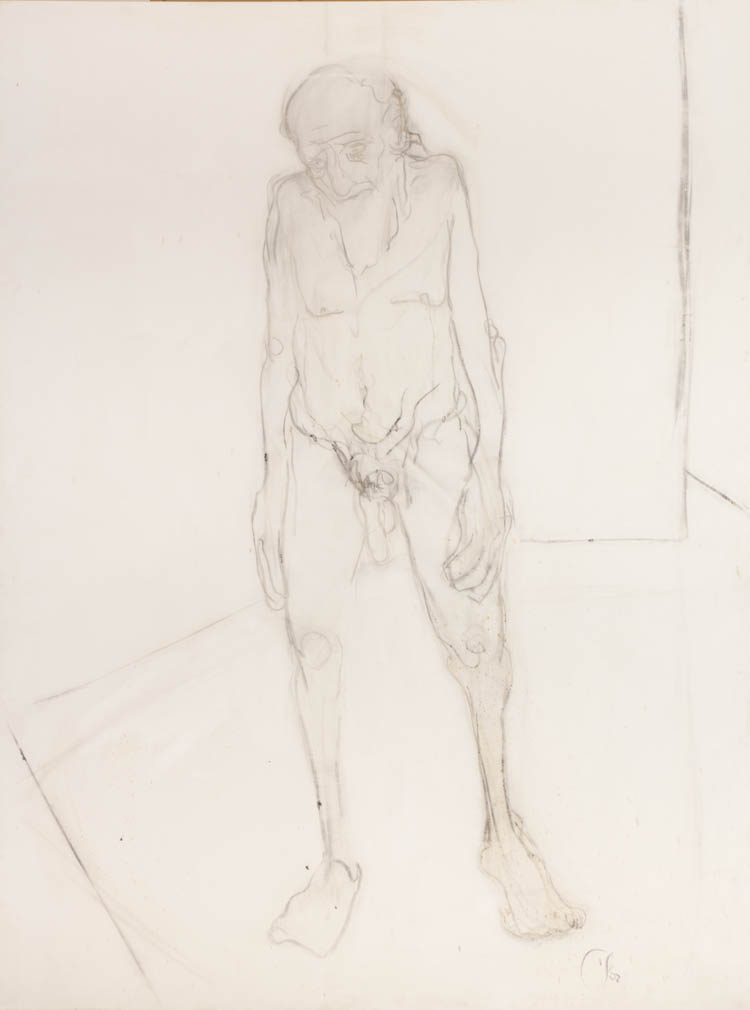 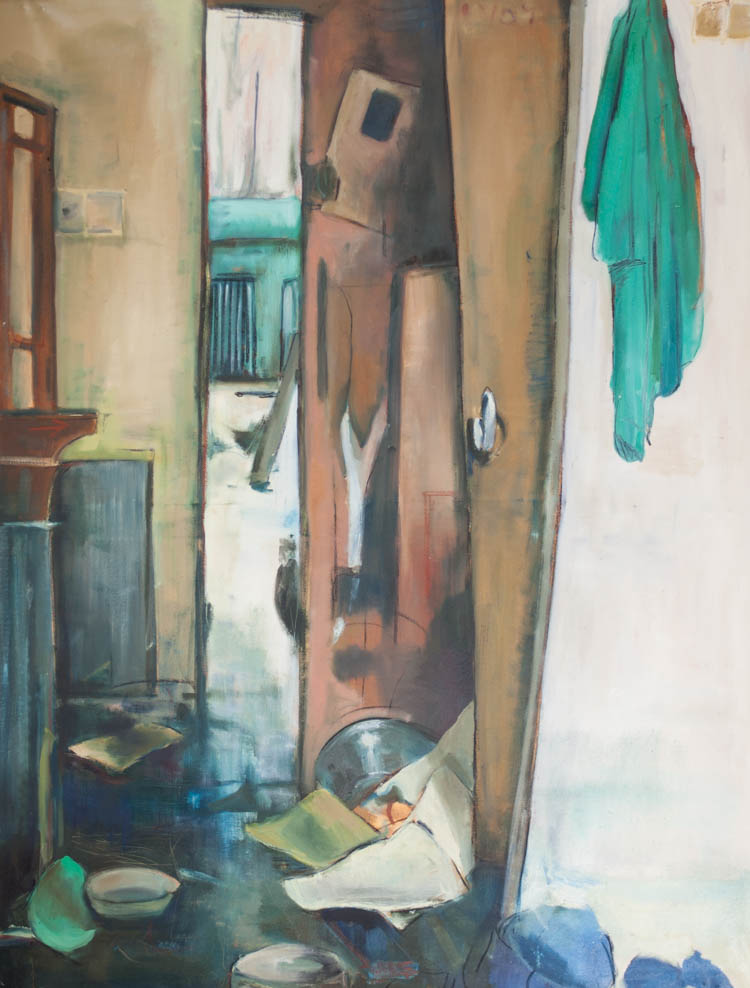