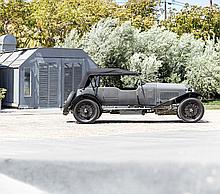 W O Bentley proudly debuted the new 3-liter car bearing his name on Stand 126 at the 1919 Olympia Motor Exhibition, the prototype engine having fired up for the first time just a few weeks earlier. In only mildly developed form, this was the model which was to become a legend in motor racing history and which, with its leather-strapped bonnet, classical radiator design and British Racing Green livery has become the archetypal vintage sports car.

Early success in the 1922 Isle of Man Tourist Trophy, when Bentleys finished second, fourth and fifth to take the Team Prize, led to the introduction of the TT Replica (later known as the Speed Model). However, by the middle of the decade the 3-Liter's competitiveness was on the wane and this, together with the fact that too many customers had been tempted to fit unsuitably heavy coachwork to the excellent 3-liter chassis rather than accept the expense and complexity of Bentley's 6½-liter 'Silent Six', led to the introduction of the '4½'.

The new 4½-liter model effectively employed the chassis, transmission and brakes of the 3-liter, combined with an engine that was in essence two-thirds of the six-cylinder 6½-liter unit. Thus the new four-cylinder motor retained the six's 100x140mm bore/stroke and Bentley's familiar four-valves-per-cylinder fixed-'head architecture, but reverted to the front-end vertical camshaft drive of the 3-liter. Bentley Motors lost no time in race-proving its new car. The new model also retained that "bloody thump", as noted Bentley owner Walter Foden referred to it, a characteristic that enables one to clearly identify a 4-cylinder Bentley from many miles away. Bentley Motors wasted no time in proving the new car in competition. It is believed that the first prototype engine went into the 3-liter chassis of the 1927 Le Mans practice car. Subsequently this same engine was fitted to the first production 4½-liter chassis for that year's Grand Prix d'Endurance at the Circuit de la Sarthe. The original 4½-liter car, nicknamed by the team 'Old Mother Gun' and driven by Frank Clement and Leslie Callingham, promptly set the fastest race lap of 73.41mph before being eliminated in the infamous 'White House Crash' multiple pile-up. The new engine quickly proved its worth, and it managed an outright win at Le Mans in 1928.

The 4½-liter was produced for four years, all but nine of the 665 cars made being built on the 3-liter's 'Long Standard', 10' 10"-wheelbase chassis. Purchasers of the 4½-liter model were, in common with those of all vintage-period Bentleys, free to specify their preferences from a very considerable range of mechanical and electrical equipment, in addition to whatever body style and coachbuilder might be required. The most iconic of course were the cars fitted with tourer bodies by Vanden Plas, which provided 669 bodies from 1922 to 1931. Bentley's relationship with Vanden Plas began in 1922, and by 1924, the company bodied 84 Bentleys alone. In 1925, Vanden Plas leased a portion of their premises to Bentley for the latter's service department, securing their role as the coachbuilder of choice for Bentley.

'It's only original once...' or so the saying goes, a phrase that is immediately conjured with one glance at this remarkable battleship grey 4½ liter Bentley. Approaching 90 years of age, this British sportscar looks today much as it would have done when completed by the dream team of WO Bentley's Cricklewood Works and Vanden Plas' coachbuilding house. Of course, it was that partnership that provided the juice for the campaigns at Le Mans throughout the 1920s and garnered no fewer than 4 outright wins. Each were built in this guise of the most potent Bentley to date, clad in lightweight open bodywork. It was a recipe for success, and provided Bentley and the famous Bentley Boys, the likes of Henry 'Tim' Birkin, Woolf Barnato, Clement Watney, and so on, with numerous other wins around the UK and Europe, at Brooklands and beyond. Back in the day, it would have been every boy's wish to pilot one of these fabled machines, and that desire has perpetuated the brand through 99 years of existence.

If you wanted to understand and appreciate the product that WO Bentley built, you need look no further than this car, for in this age of a need for authenticity, this must be one of very few of this type that can satisfy even the hardest scrutiny. That it remains so unmolested, or as one Bentley expert opined some years ago 'staggeringly original' is a combination of a limited ownership by collectors who appreciated old cars and modest accrual of mileage.

The first of those custodians was the original owner, Major E. G. Thomson, a wealthy ship builder 'North of the Border' in Scotland. Thomson is best known in car circles for his support of the iconic Ecurie Ecosse racing team, themselves winners at Le Mans in the 1950s, clearly, he always understood sports cars, when he took delivery of RL3427, even then going against the trend of British Racing Green, Thomson's Bentley, the second of three that he would own was liveried more like one of his ships, in an understated grey hue. As new, it was built to the latest specifications provided by the London Bentley firm.

Delivered care of his Ainslee Place, Edinburgh address on January 14, 1929, a year of use and roughly 12, miles later it was moved on, no doubt when his 6½ arrived. The next owner is recorded as A.J.H. Mowbray of Stirling also in Scotland and there the Bentley Motors record ceases. It can be safely assumed that the car remained in that country though as it was still there after the war, and by 1951 is known to have been the property of John Sword. The Sword name sits prominently in auction folklore as the dispersal of Mr. Sword's collection at East Balgray in 1962 and 1965 is commonly referenced as the beginning of the market for collectible motorcars. By his death some 200 plus cars had been amassed and the auctions were landmark events. Contemporary reports show Ralph Dunwoodie operating on behalf of the Harrah Collection acquiring numerous cars and paying the highest prices of the day. The British commentary was now that Americans were taking interest in old cars, it had moved beyond a hobby!

Through the two dispersal auctions, RL3427, perhaps considered as part of the family was not presented for sale, and instead was retained and placed on public display in the Glasgow Transport Museum. There it would remain until 1992, when Bonhams Co-Chairman Malcolm Barber in previous employ handled its sale, the new home after at least 4 decades was a man who was by then infamous in politics, but becoming increasingly famous in the motoring community – the Rt. Hon. Alan Clark. Clark was a long-term car enthusiast, early contributor to Octane Magazine and wrote a book of his motoring adventures entitled "Back Fire".

It would pass from Clark through two well-known collectors, selling with the Brooks/Bonhams team in 2005, before arriving in the present collection ownership in 2016. At each juncture, its commentary has been extremely favorable as to its originality and the general assessment has been that its odometer reading in the early 20,000s is likely from new.

In 2016, the noted authority Dr. Clare Hay was commissioned to report on the car, this being o...

Provenance: Given by the artist to the Scottish Artists' Benevolent Association, in aid of a special fund raised by the Association for the relief of artists in distress owing to the War, March 1915. 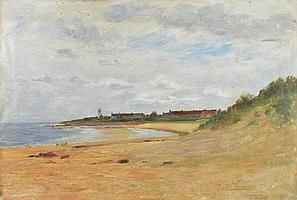 Description: * Thomson (Leslie, 1851-1929). Brora, oil on canvas, laid down on board, signed (somewhat indistinctly) lower right, 35 x 51.5cm (13.75 x 20.25ins), framed and glazed. Provenance: Exhibited at the Scottish Artists' Benevolent Association Special Exhibition, Glasgow, March 1915, for the relief of artists in distress owing to the war, with handwritten and printed labels. The Scottish landscape and coastal painter John Leslie Thomson was influenced by Daubigny and the Barbizon School of plein-air painting. He exhibited at the Royal Academy from 1873, and was a member of the New English Art Club. (1)... 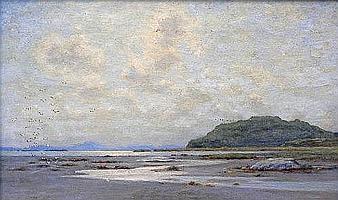 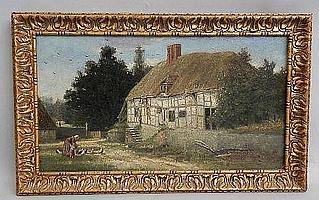