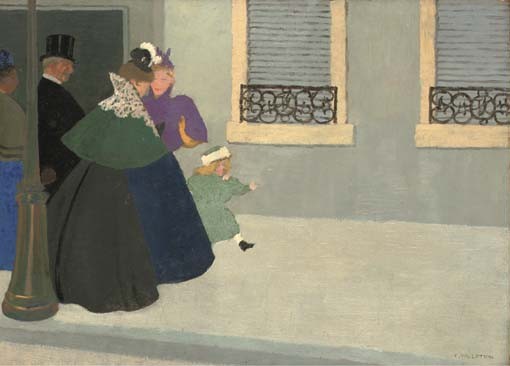 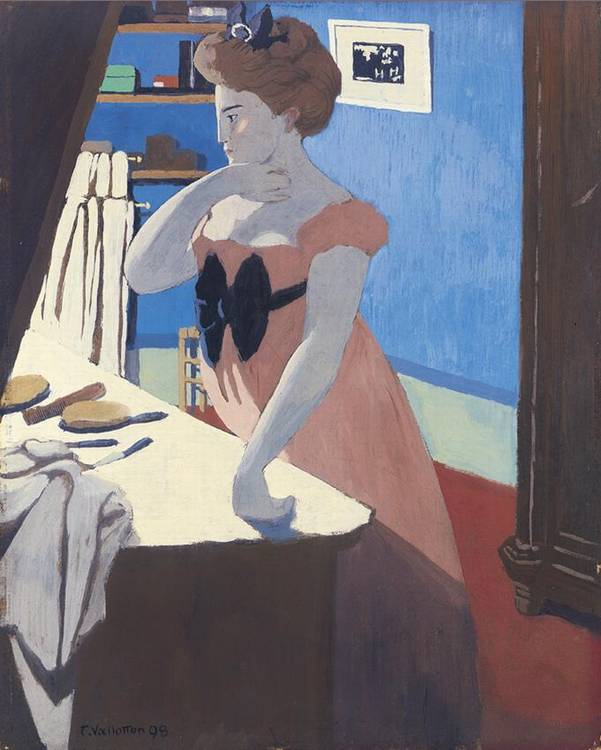 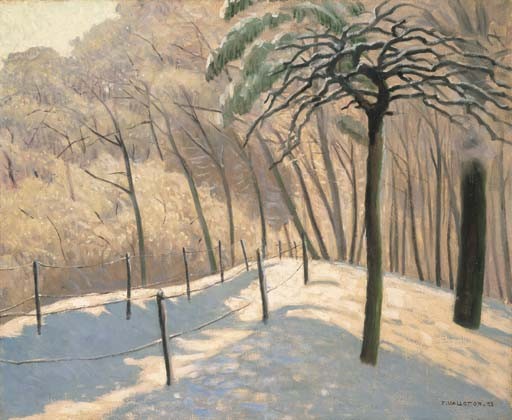 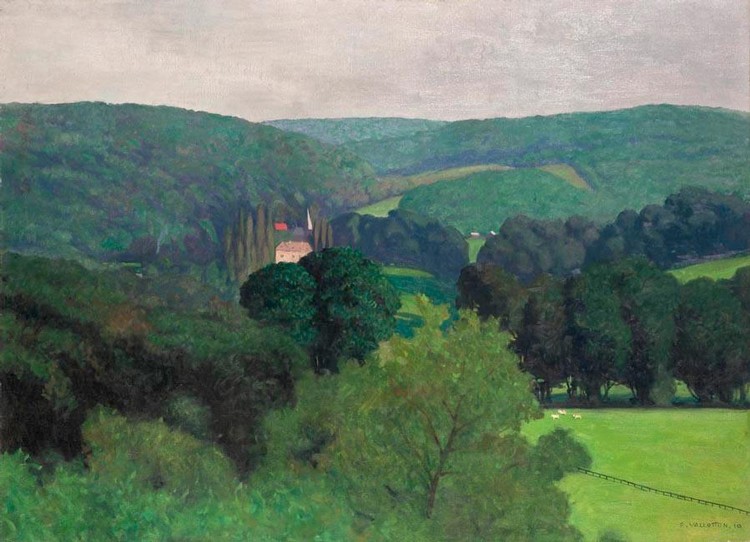 Félix Edouard Vallotton (December 28, 1865 – December 29, 1925) was a Swiss/French painter and printmaker associated with the collective known as Les Nabis. He was an important figure in the development of the modern woodcut.


Vallotton was born into a conservative middle-class family in Lausanne, and there he attended Collège Cantonal, graduating with a degree in classical studies in 1882. That same year, he moved to Paris to study art under Jules Joseph Lefebvre and Gustave Boulanger at the Académie Julian. He spent many hours in the Louvre, and he greatly admired the works of Holbein, Dürer and Ingres, artists who would remain exemplars for Vallotton throughout his life. Vallotton's earliest paintings, chiefly portraits, are firmly rooted in the academic tradition. In 1885, at the age of 20, he painted the Ingresque Portrait of Monsieur Ursenbach as well as his first painted self-portrait, which received an honorable mention at the Salon des artistes français in 1886.


Over the following decade, Vallotton painted, wrote art criticism, and made a number of prints. In 1891, he executed his first woodcut, a portrait of Paul Verlaine. The many woodcuts Vallotton produced during the 1890s were recognized as innovative, and established him as a leader in the revival of true woodcut as an artistic medium. In the western world, the relief print, in the form of commercial wood engraving, had long been utilized mainly as a means to accurately reproduce drawn or painted images and, latterly, photographs. Vallotton's woodcut style was novel in its starkly reductive opposition of large masses of undifferentiated black and areas of unmodulated white. Vallotton emphasized outline and flat patterns, and generally eliminated the gradations and modeling traditionally produced by hatching. He was influenced by post-Impressionism, Symbolism, and especially by the Japanese woodcut: a large exhibition of ukiyo-e prints had been presented at the École des Beaux-Arts in 1890, and Vallotton, who was like many artists of his era an enthusiast of Japonism, collected these prints.


His woodcut subjects included domestic scenes, bathing women, portrait heads, and several images of street crowds and demonstrations—notably, several scenes of police attacking anarchists. He usually depicted types rather than individuals, eschewed the expression of strong emotion, and "fuse[d] a graphic wit with an acerbic if not ironic humor". Vallotton's graphic art reached its highest development in Intimités (Intimacies), a series of ten interiors published in 1898 by the Revue Blanche, which deal with tension between men and women. Vallotton's woodcuts were widely disseminated in periodicals and books in Europe as well as in the United States, and have been suggested as a significant influence on the graphic art of Edvard Munch, Aubrey Beardsley, and Ernst Ludwig Kirchner.

By 1892 he was affiliated with Les Nabis, a group of young artists that included Pierre Bonnard, Ker-Xavier Roussel, Maurice Denis, and Édouard Vuillard, with whom Vallotton was to form a lifelong friendship. During the 1890s, when Vallotton was closely allied with the avant-garde, his paintings reflected the style of his woodcuts, with flat areas of color, hard edges, and simplification of detail. His subjects included genre scenes, portraits and nudes. Examples of his Nabi style are the deliberately awkward Bathers on a Summer Evening (1892–93), now in the Kunsthaus Zürich, and the symbolist Moonlight (1895), in the Musée d'Orsay.

In 1899 Vallotton married Gabrielle Rodrigues-Henriques, a wealthy young widow with three children, and in 1900 he attained French citizenship. Around 1899, his printmaking activity diminished as he concentrated on painting, developing a sober, often bitter realism independently of the artistic mainstream. His Portrait of Gertrude Stein (1907) was painted as an apparent response to Picasso's portrait of the previous year, and in The Autobiography of Alice B. Toklas Stein described the very methodical way in which Vallotton painted it, working from top to bottom as if lowering a curtain across the canvas.


Vallotton's paintings of the post-Nabi period found admirers, and were generally respected for their truthfulness and their technical qualities, but the severity of his style was frequently criticized. Typical is the reaction of the critic who, writing in the March 23, 1910 issue of Neue Zürcher Zeitung, complained that Vallotton "paints like a policeman, like someone whose job it is to catch forms and colors. Everything creaks with an intolerable dryness ... the colors lack all joyfulness. In its uncompromising character his art prefigured the New Objectivity that flourished in Germany during the 1920s, and has a further parallel in the work of Edward Hopper.


He continued to publish occasional art criticism, in addition to other writings. He wrote eight plays, some of which received performances (in 1904 and 1907), although their reviews appear to have been unfavorable. He also wrote three novels, including the semi-autobiographical La Vie meurtrière (The Murderous Life), begun in 1907 and published posthumously.

Vallotton responded in 1914 to the coming of the First World War by volunteering for the French army, but he was rejected because of his age. In 1915–16 he returned to the medium of woodcut for the first time since 1901 to express his feelings for his adopted country in the series, This is War,[his last prints. He subsequently spent three weeks on a tour of the Champagne front in 1917, on a commission from the Ministry of Fine Arts. The sketches he produced became the basis for a group of paintings, The Church of Souain in Silhouette among them, in which he recorded with cool detachment the ruined landscape. In his last years Félix Vallotton concentrated especially on still lifes and on "composite landscapes", landscapes composed in the studio from memory and imagination. Always a prolific artist, by the end of his life he had completed over 1700 paintings and about 200 prints, in addition to hundreds of drawings and several sculptures. He died on the day after his 60th birthday, following cancer surgery in Paris in 1925.

A retrospective exhibition by the Salon des Indépendants took place in 1926. Some of Vallotton's works were exhibited at the Grand Palais, along with works by van Gogh, Modigliani, Seurat, Toulouse-Lautrec, Schützenberger and others.

Vallotton's brother Paul was an art dealer and founded the Galerie Paul Vallotton in Lausanne in 1922, which continued operation for many years under the control of his descendants. Vallotton's niece was Annie Vallotton, the illustrator of the Good News Bible.

View All Félix Vallotton for Sale at Auction Now 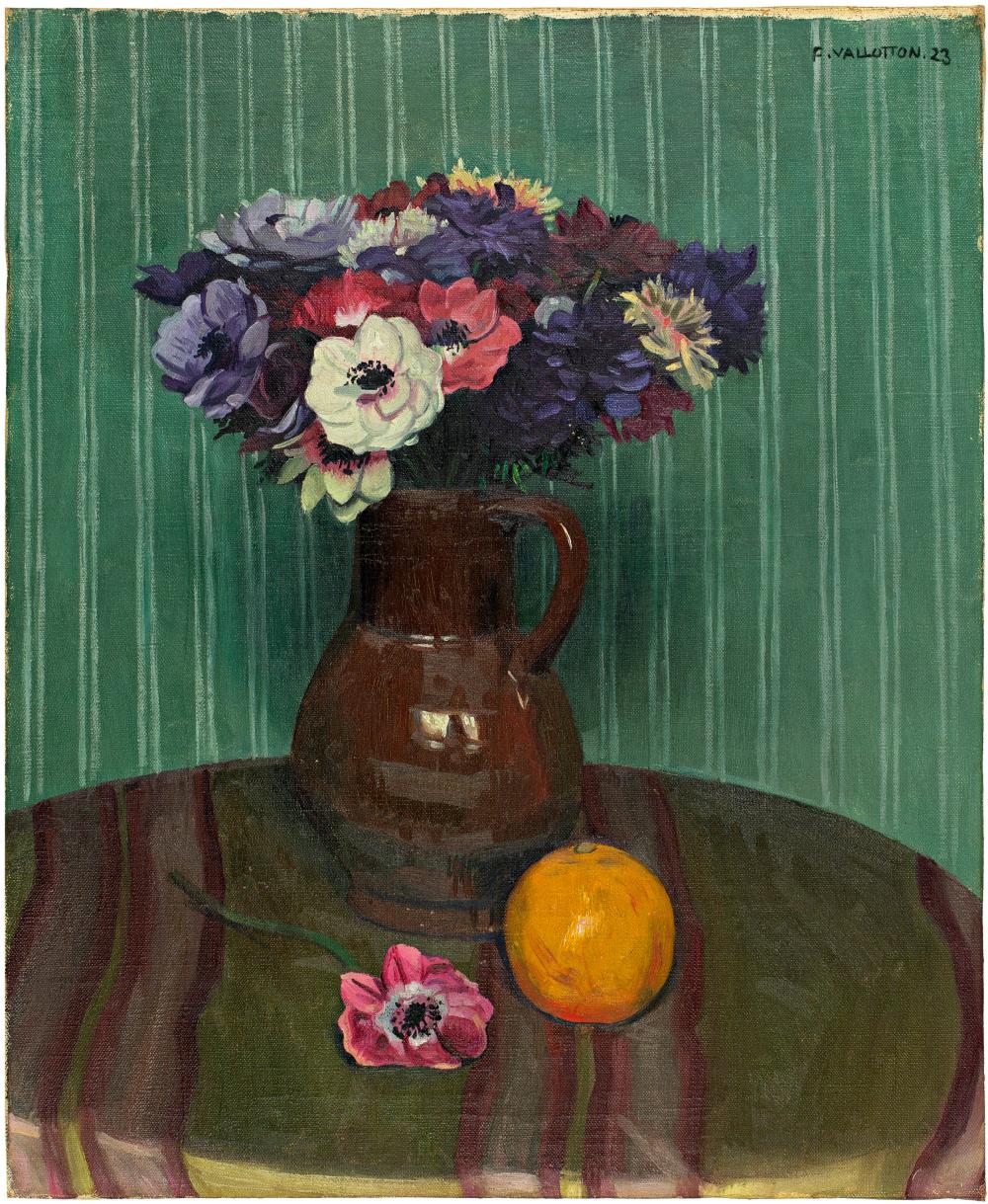 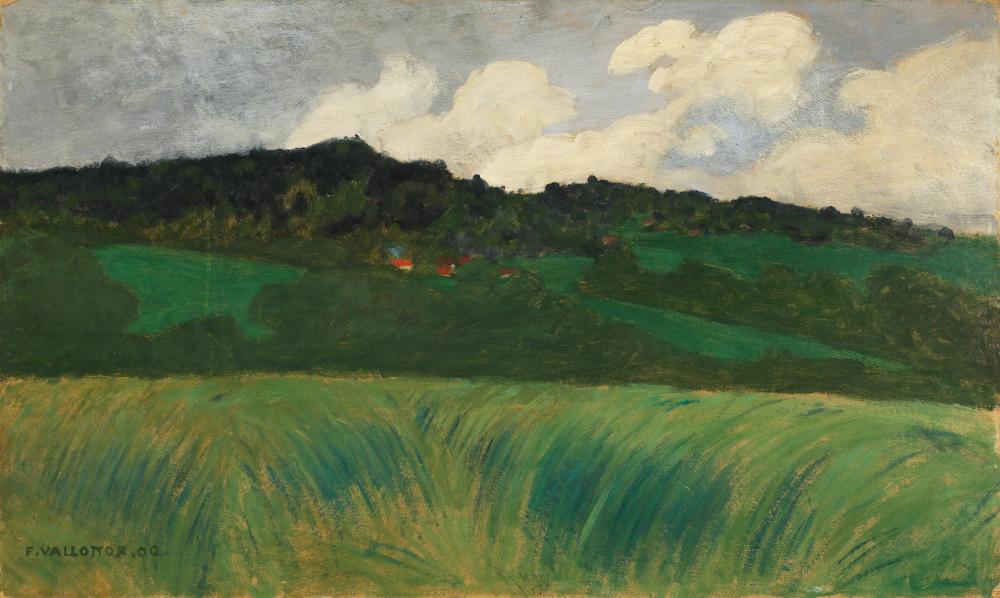 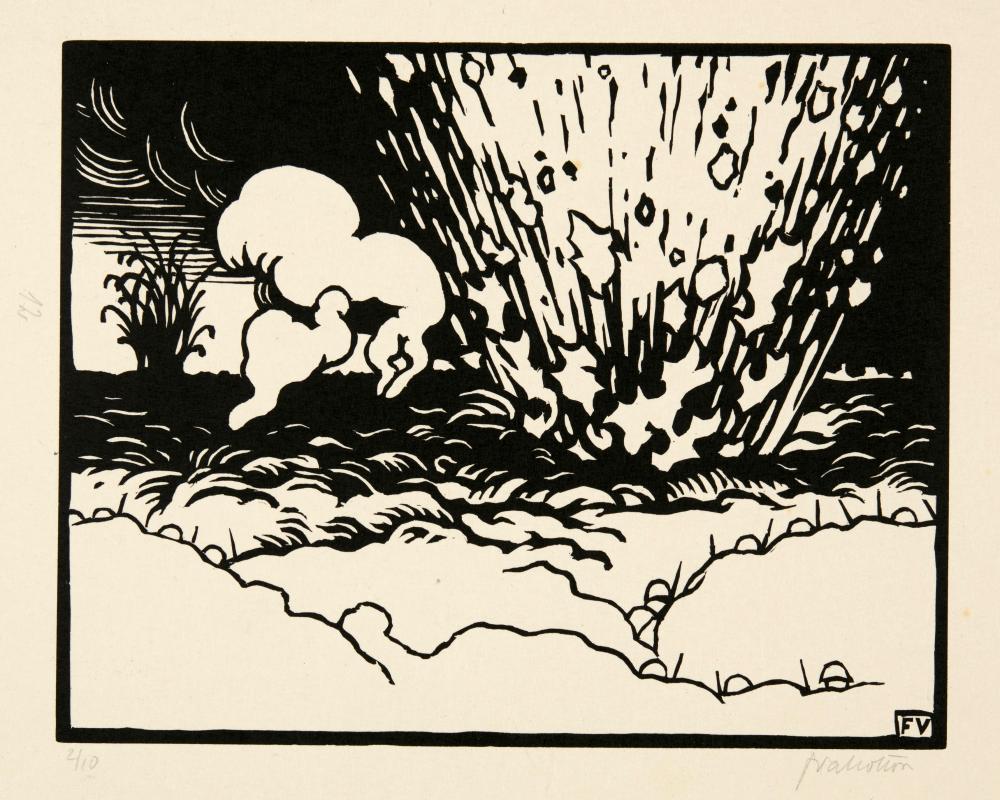 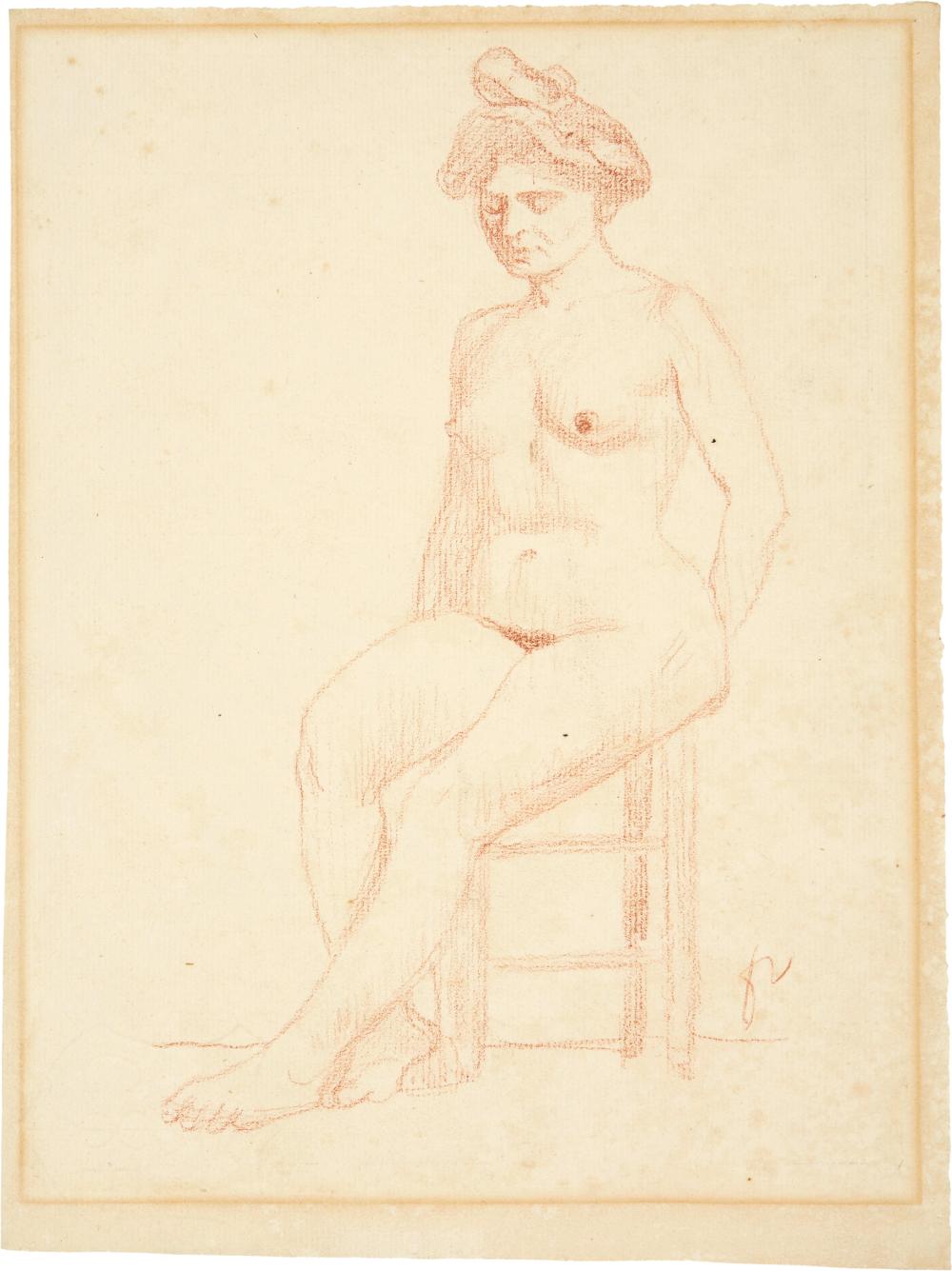 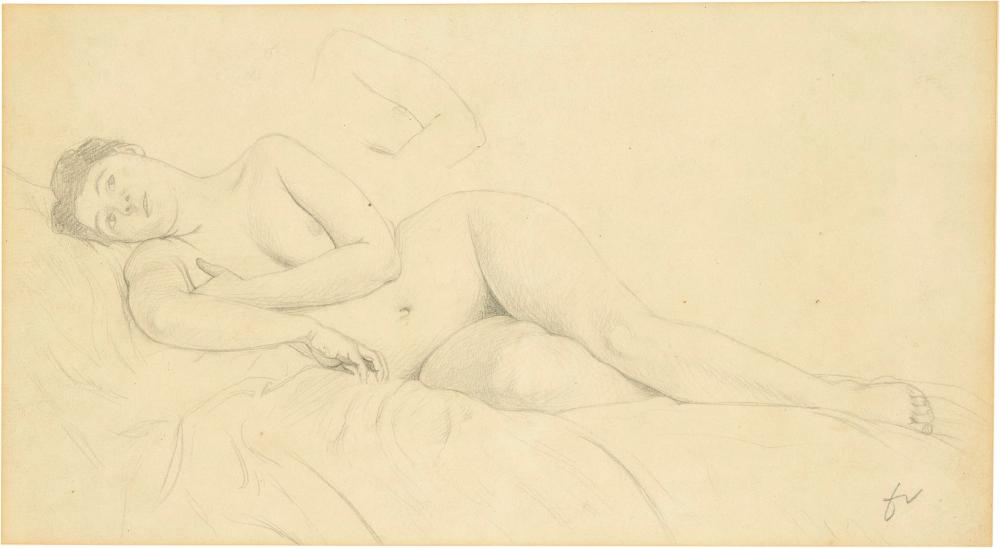 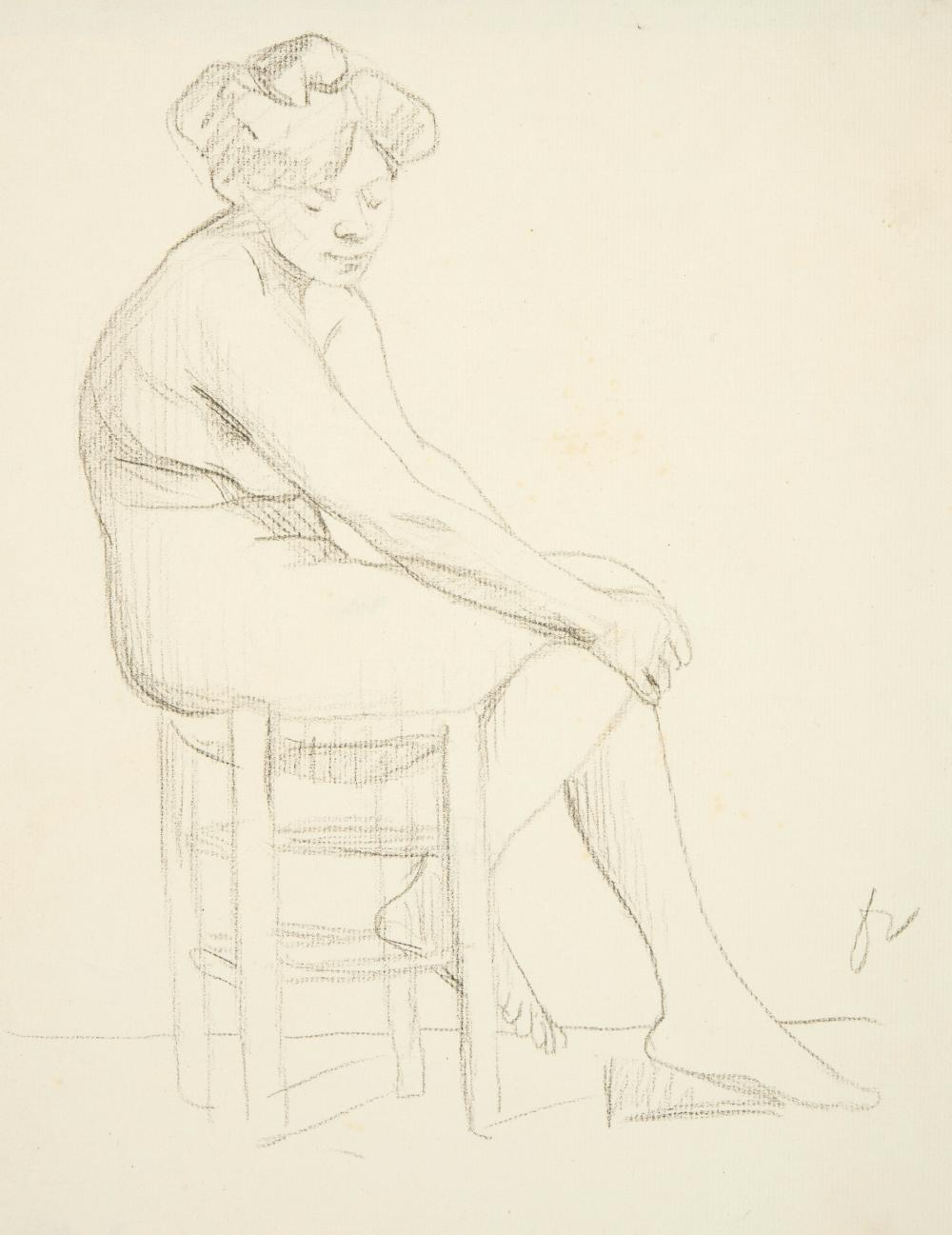 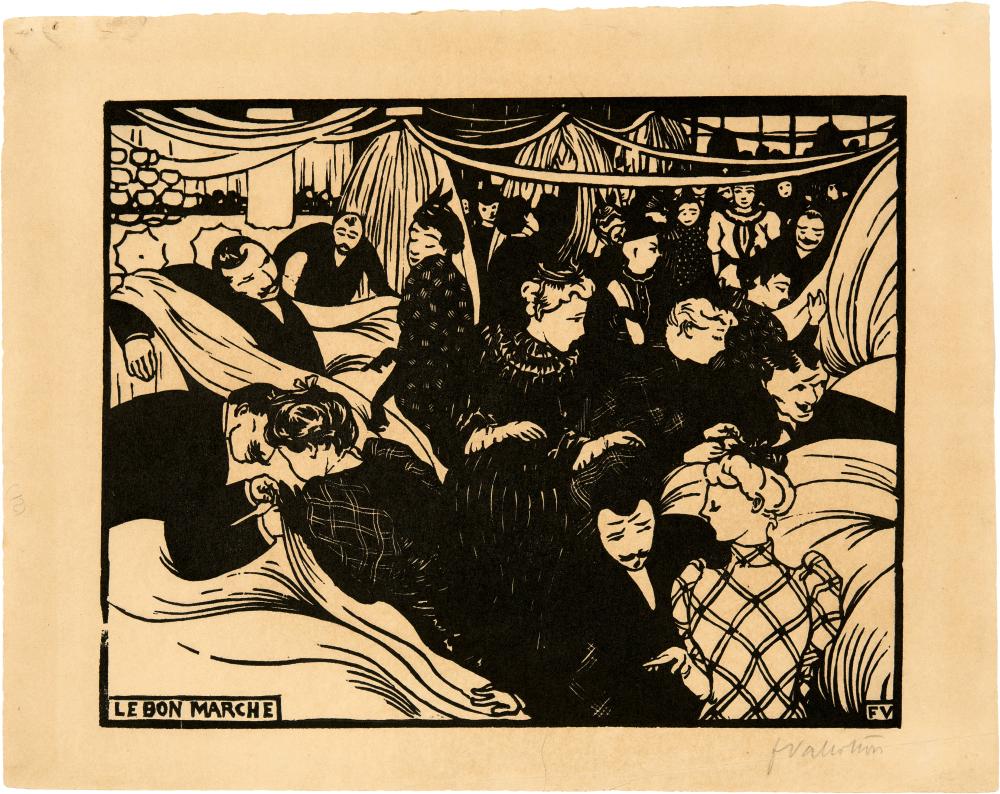 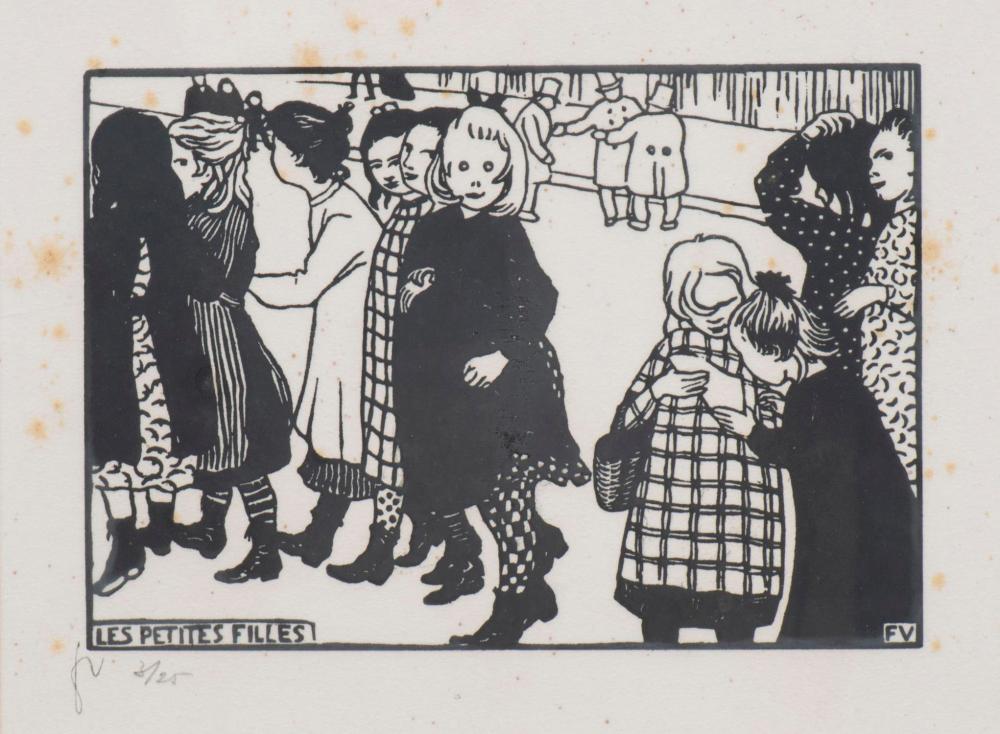 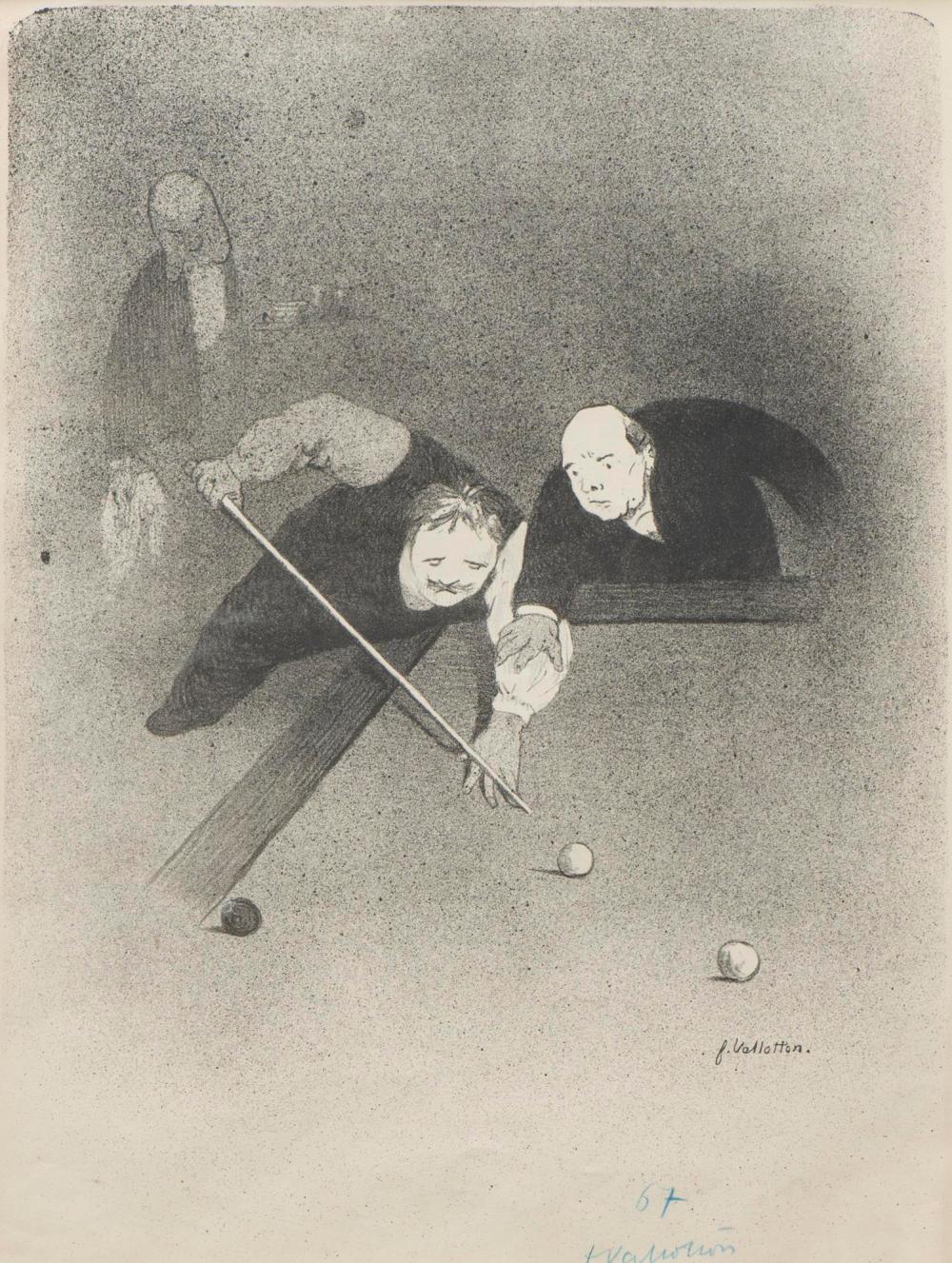 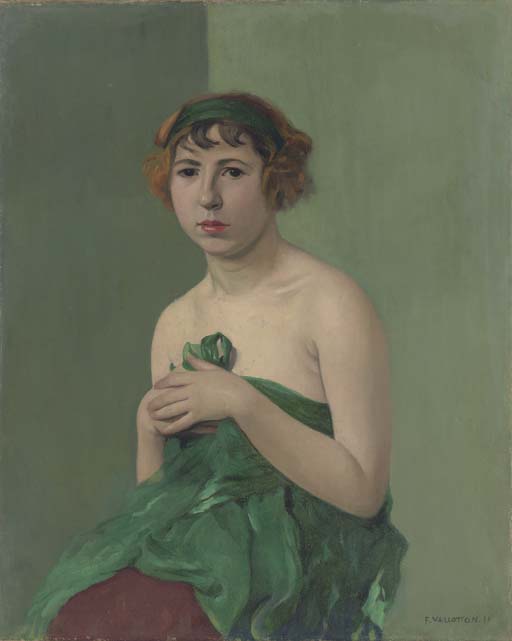 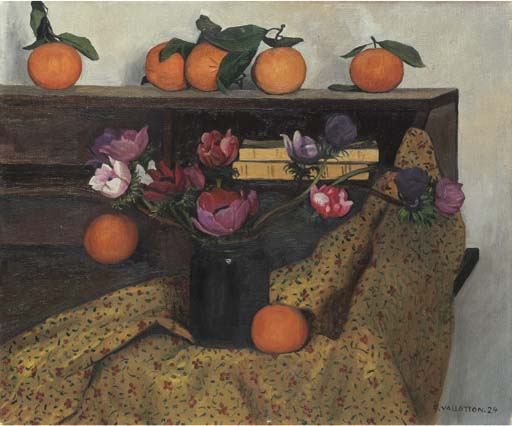 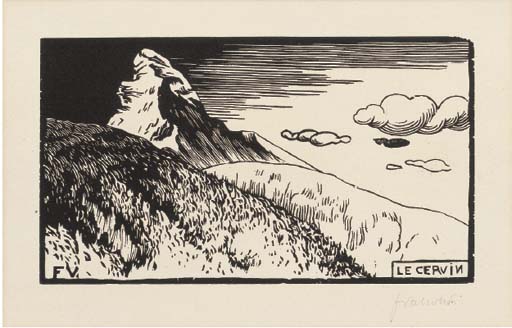 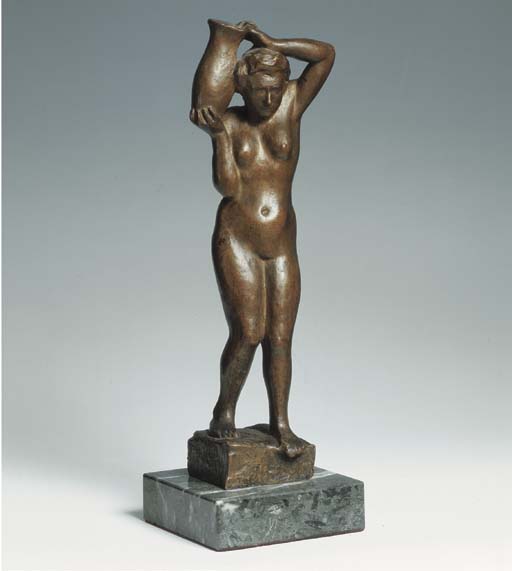 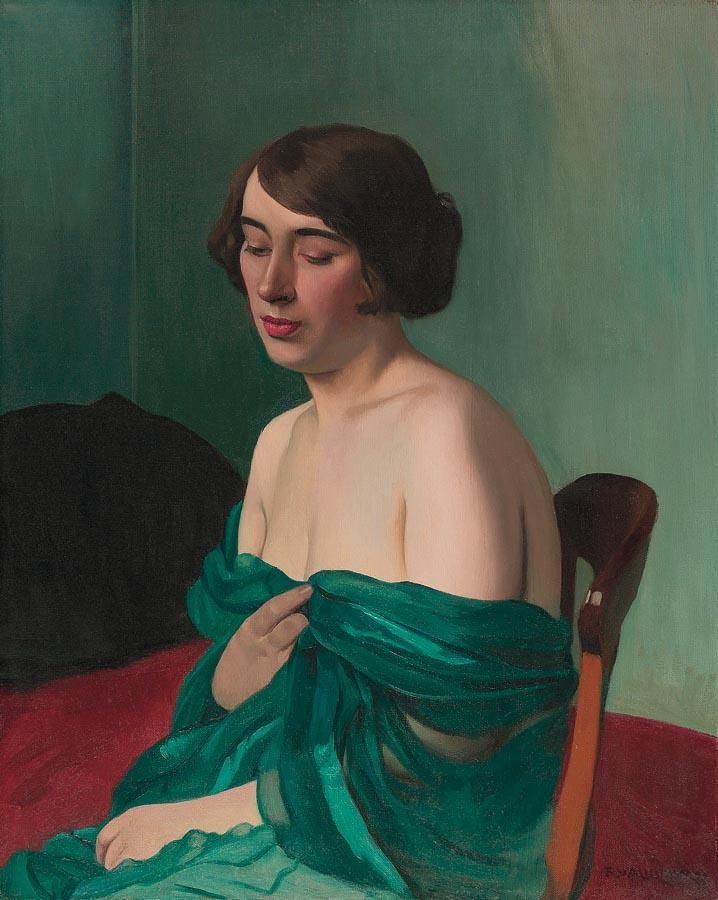 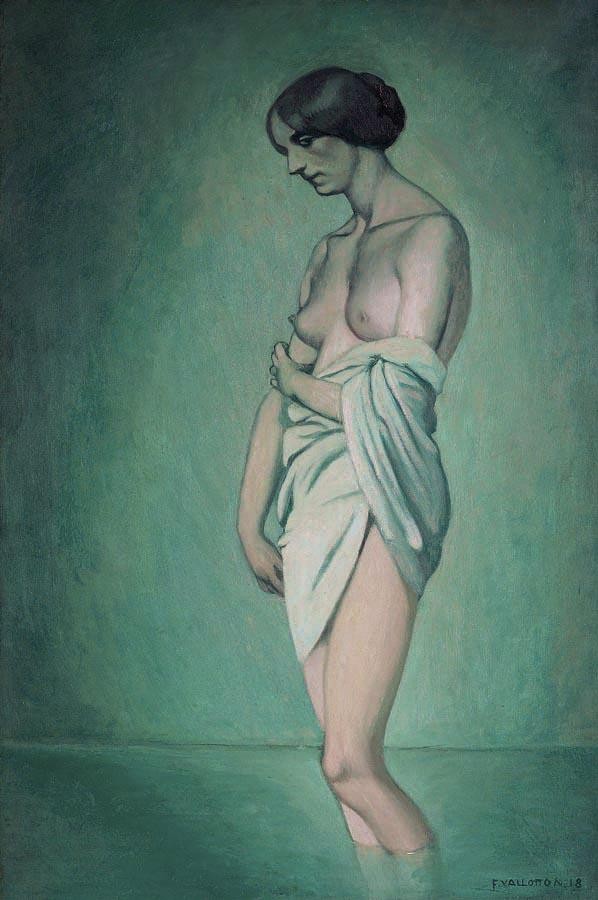 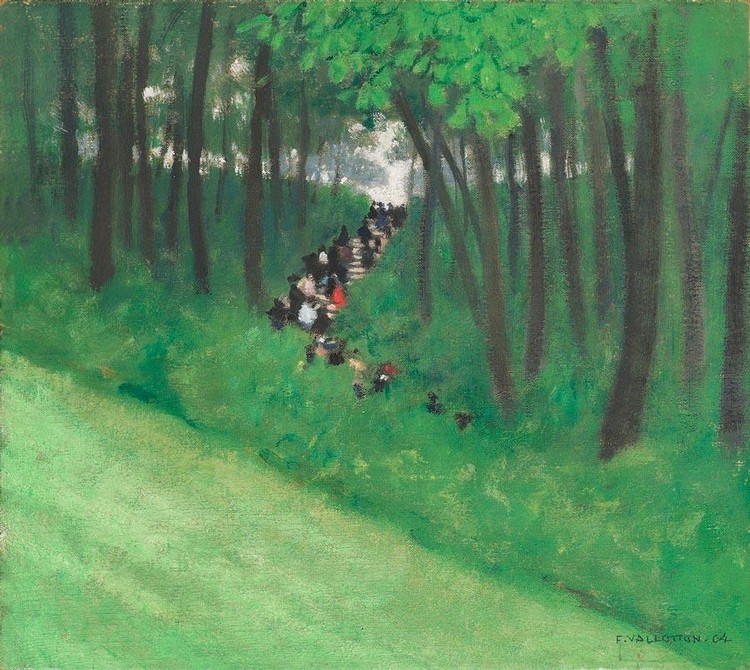 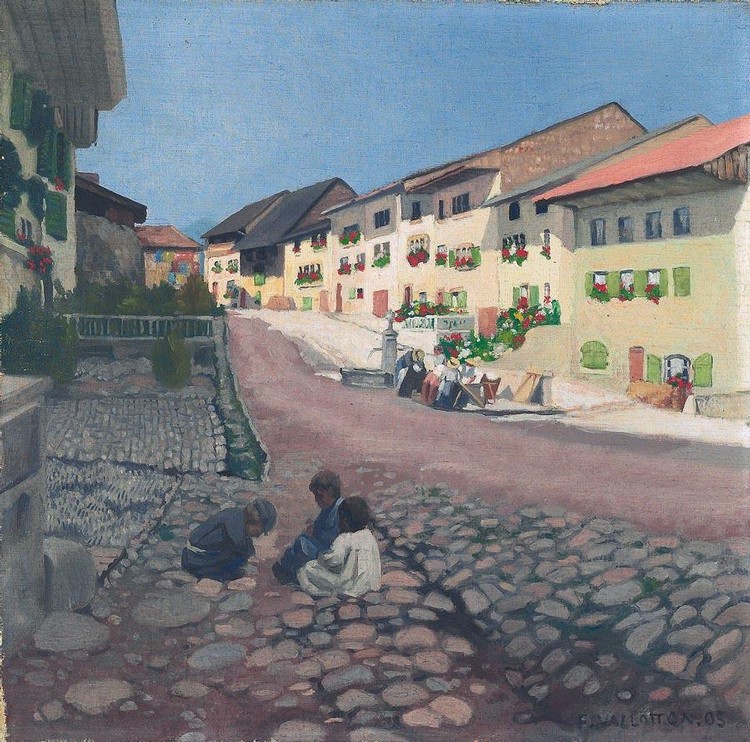 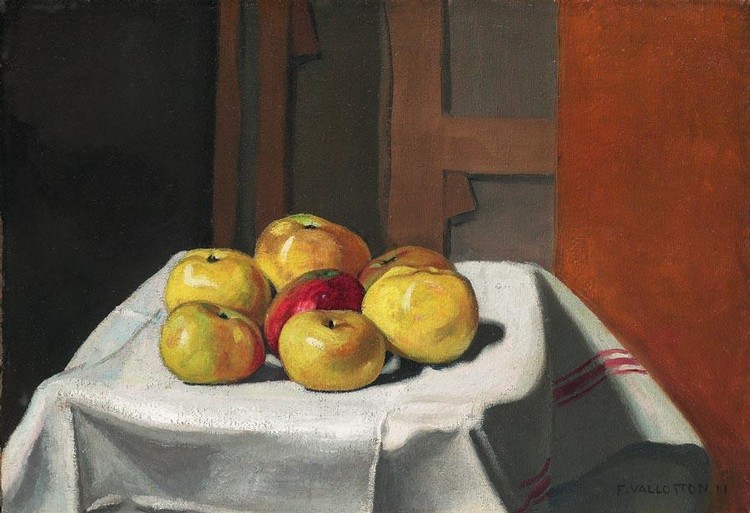 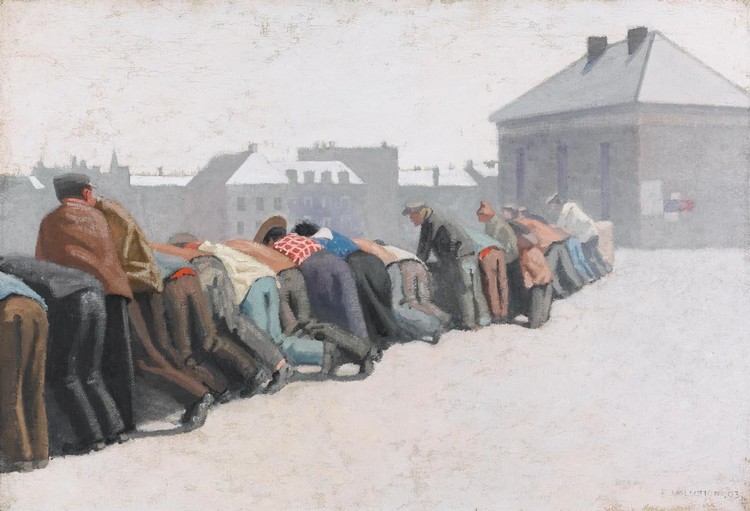 PROPERTY FROM THE FAMILY OF THE ARTIST FÉLIX VALLOTTON 1865-1925 ARRIVÉE DE BATEAUX, DIEPPE 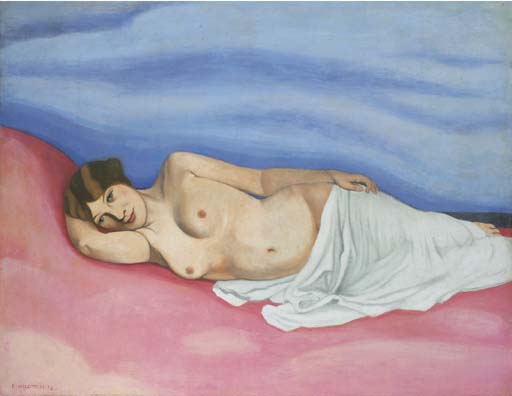