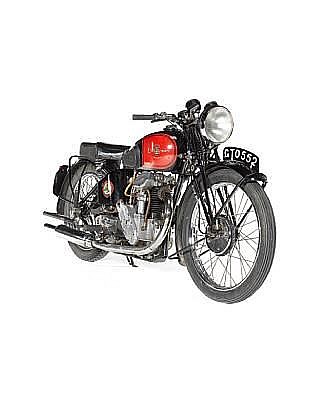 Although it had proved fast enough to win the 1933 Lightweight TT in Syd Gleave's hands, Excelsior's complex, twin-cam, four-valve ‘Mechanical Marvel’ proved something of a disappointment thereafter and at the end of the 1934 season the Tyseley firm opted for a simpler design - the Manxman. Like the Marvel, the Manxman engine was built by Blackburne, though increasing friction with its engine supplier forced Excelsior to take over production themselves early in 1936. A single-overhead-camshaft, two-valve design, the Manxman was built in 250, 350 and 500cc capacities. Road and race versions were offered, though the 500 was only ever marketed as a sports roadster. Although it never won a TT, the Manxman enjoyed considerable success in international racing and the Manx Grand Prix, Denis Parkinson winning the Lightweight race three times on the trot between 1936 and 1938. Notable Manxman developments included the switch to a shorter-stroke 250 engine in 1937 and the adoption (also applied to the 350) of an aluminium-alloy cylinder head with right-hand exhaust port.

This 1939-model J12 is the culmination of five years intensive development in Excelsior’s experimental and racing departments and represents the 350 Manxman in its ultimate specification. ‘CXC’-prefixed 350cc engines incorporated hairpin valve springs and a crankcase of improved design, and were destined for installation in late 1938 H12 and 1939 J12 models. Although the Excelsior factory records were destroyed during WW2, sufficient data has survived concerning J12-series Manxmen to date the production of engine number ‘CXC 110’ to between August and December 31st 1938. Thus ‘GTO 552’ would have been despatched by the Excelsior factory as a 1939 model machine late in 1938.

‘GTO 552’ appears to be to correct 1939 specification in all major respects including frame, forks, gearbox, brakes, hubs, tanks, engine and the round barrel silencer, though the control levers and some other minor cosmetic details are not original. Because of its high price, the Manxman often languished in dealers’ showrooms for months before finding a buyer, and for this reason many show a much later date of first registration than manufacture, as does ‘GTO 552’, which was first registered in 1940. Evidence suggests that fewer than 60 ‘CXC’-series engines were built, though not all were fitted to machines before production ceased, the highest engine number currently known being ‘CXC 160’. According to the Excelsior Manxman Register, there are only eight motorcycles (including ‘GTO 552’) with the correct ‘JM’-prefixed frame numbers known to survive from the 1939 production year, while the tally of surviving ‘CXC’-series engines - previously 13 - was reduced to 12 following the National Motorcycle Museum fire (the surviving engines include those in the complete motorcycles).

‘GTO 552’s accompanying (copy) old-style Swansea V5 records that it was reregistered in November 1979 to one Michael Russell Hudson, of Bramley near Guildford, Surrey, from whom it was acquired by Brian Verrall in May 2006. Other documentation on file includes a letter from Excelsior Manxman authority, David Hirons; a quantity of photocopied press articles and technical data concerning the Manxman; and a photocopied Excelsior 1939 range brochure. The machine is offered with Swansea V5C registration document.