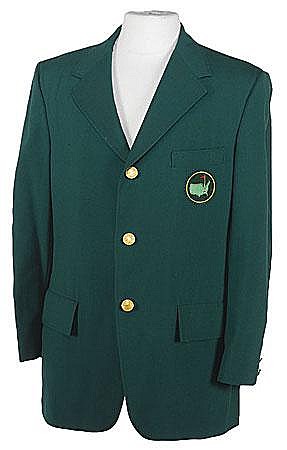 Every April, Augusta National Golf Club hosts The Masters Tournament, one of the few events in the world of sports where history is made year-in and year-out. In addition to the cash prize, a silver replica of the Augusta National clubhouse trophy, and the well-earned shower of accolades, the winner of the four-day challenge is awarded the Green Jacket, arguably the single greatest triumph for any linksman. Incidentally, as golf collectors and fans are undoubtedly aware, Augusta National emphasizes that members are not allowed to remove the jackets from the premises, and even Masters Champions are only permitted to carry their jackets outside of Augusta National for one year. Thereafter, the jackets are returned to Augusta where they remain indefinitely. Proudly presented is an actual member's Green Jacket that was manufactured on February 19, 1980, and which belonged to a necessarily anonymous Augusta National member. The myth-like legacy surrounding the Green Jacket is demonstrated and reinforced by the manner of the items' manufacture. Rather than have one assembler fashion each facet of the coveted pieces, Augusta ensures that various parts are produced exclusively by a few choice entities. This, of course, counters any attempt at reproduction, and assures that the Green Jackets cannot be issued without Augusta's expressed consent. Carefully crafted by the Hamilton Tailoring Company of Cincinnati, Ohio - which has produced the primary elements of Green Jackets since 1967 - this exceptional, wool and rye green heirloom features a classic three-button style with a single-breasted and center-vented design. The jacket's buttons, fashioned by the famous Waterbury Button Company of Cheshire, Connecticut and exhibiting the Waterbury name on their undersides, are logo-stamped and made of brass; a breast-pocket patch adorns the left side, on which an Augusta National logo has been embossed. The interior of the jacket features a pair of pockets, one on each side - a "Hamilton Cincinnati" patch is sewn on the left pocket, and located within the right compartment, which bears a detailed, embossed Augusta National symbol stitched to its exterior, is the maker's tag (dated "2-19-80"). Accompanying the item is its original Gentry garment bag. That this piece of golf legend - this staple of links lore - escaped the boundaries of Augusta is truly remarkable, and so, this rare memento will enhance even the greatest, most advanced golf collection!