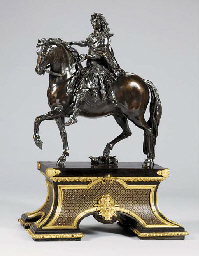 A BRONZE EQUESTRIAN GROUP OF LOUIS XIV, SET ON AN ORMOLU-MOUNTED EBONY-VENEERED BOULLE MARQUETRY BASE

Lot 100: A BRONZE EQUESTRIAN GROUP OF LOUIS XIV, SET ON AN ORMOLU-MOUNTED EBONY-VENEERED BOULLE MARQUETRY BASE

Cast from a model by Martin van den Bogaert, called Desjardins (1637-1694), circa 1700-1715 With a dark brown patina and chocolate brown high points; minor shrinkage cracks to the ebony veneer of the base; minor warping to brass inlays; repair to the tail. 17 5/8 in. (44.8 cm.) high 251/2 in. (64.7 cm.) high, overall PROVENANCE H“tel de Sagonne, Paris Paris, Palais Galliera, 19 June 1970, lot 46 LITERATURE H. Demoriane, L'Importance du Socle', in Connaissance des Arts 108, Feb. 1961, p. 70, fig. 14. D. Lewis, 'Two Equestrian Statuettes after Martin Desjardins', in Studies in the History of Art 6, 1974, pp. 143-155. L. Seelig, Studien zu Martin van den Bogaert gen. Desjardins (1637-1694), PhD diss., Munich, 1980. F. Souchal, French Sculptors of the 17th and 18th centuries - The reign of Louis XIV, Supplementary volume, London, 1993, no. 47, pp. 74-76. COMPARATIVE LITERATURE: New York, Knoedler and Co., The French Bronze 1500-1800, 6-27 Nov. 1968, nos. 48-49. F. Souchal, French Sculptors of the 17th and 18th centuries - The reign of Louis XIV, I, no. 47, pp. 258-259. M. Martin, Les Monuments questres de Louis XIV - Une grande entreprise de propagande monarchique, Paris, 1986. NOTES On 21 March 1686, the City of Lyons voted to erect an equestrian monument to the Sun King, Louis XIV, and the mar‚chal de Villeroy entrusted the commission to the Dutch sculptor Martin van den Bogaert, better known today by the French form of his name, Desjardins. Erected in the Place Bellecour in 1713, it was destroyed during the revolution in 1792. Today, only a foot remains, housed in the Mus‚e historique in Lyons. Numerous reductions and variations of the monument exist, and it was long assumed that these were merely later 18th century copies of the existing bronze by Desjardins. However, letters reveal that after the death of Desjardins, and more than ten years before the erection of the monument in Lyons, Baron Cronstr”m was sent to Paris by King Carl XI of Sweden to buy the half-size wax model and a plaster version of the monument. Cronstr”m also wrote back to Count Tessin to say that he had purchased a small bronze example 15-18 pouces (42-45cm) high. This information is critical because it records the existence of bronze reductions of the Lyon monument on the same scale as the present bronze as coming directly from the artist's studio in his own lifetime. In his article on the National Gallery version of this model, Lewis singles out seven of the known reductions as being 'particularly notable for their generally fine quality and almost uniform size' (Lewis, op. cit., p. 145). These are the bronzes in the Wallace Collection, London, the Royal Collection at Windsor, two examples at the National Gallery, Washington, the Fogg Art Museum, Cambridge, the Camoin Collection, Paris, and the present bronze. Lorenze Seelig, in his exhaustive work on Desjardins, lists all of the known reductions, including the present bronze ( op. cit, no. LIV/25, pp. 537-538). He makes a distinction between four examples, which he believes were cast by Scabol, the man responsible for casting the actual monument in the place Bellecour, and a second group - including the present lot - which he believes were cast in the studio of Martin Desjardins and his nephew Jacques (Souchal, 1993, loc. cit ). The Wallace Collection and one of the National Gallery examples of this bronze are two of the four bronzes cited by Seelig as having been cast by Scabol. The present lot was recently examined side by side with the Wallace example, and subtle differences do exist. These include a slightly greater inclination of the head of the horse and torso of the king to the left, and minor details of the hair and drapery. The portrait of Louis XIV also appears to be of a marginally older man; subtle crow's feet have been included in the finishing of the face. However, it is interesting to note that an iron core pin exists in the identical place on the neck of the horse in all three of the present lot, the Wallace bronze and the National Gallery bronze (as observed by Robert Wenley), which perhaps suggests that they were cast in the same foundry. In terms of quality and finishing, there is very little to distinguish the Wallace Collection bronze from the present example. This bronze would then seem to be close in date if, perhaps, later by a few years, than the bronze in the Wallace Collection. Whether it was cast by Scabol, or in the studio of Martin Desjardins must still remain an open question, however the impressive nature of the bronze, and the superb quality of the finishing are undoubted.