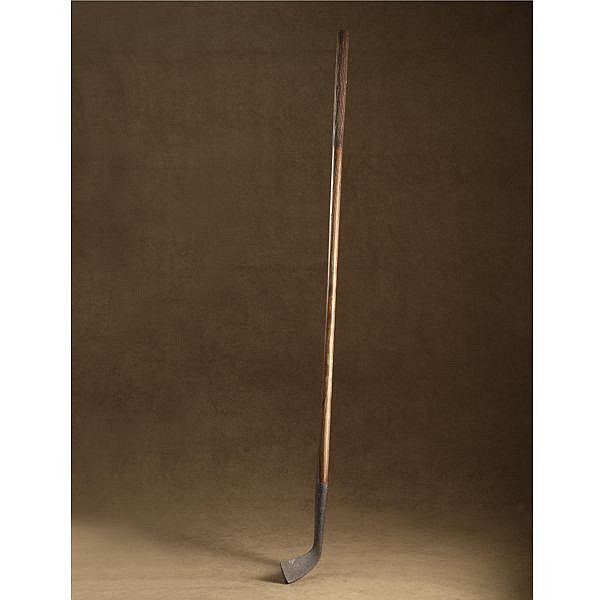 This square toe light iron dating to the 17υth century is one of the dozen or so surviring iron heads in existence. In 2005, Golf Digest estimated that there were 32,000 golf courses throughout the world. In the 1600's, when this club was used, there were approximately a dozen courses, all in Scotland. To be able to play you would have had to be a member of the upper class or royalty (think Mary Queen of Scots and James IV), and you played at St. Andrews, Perth or the most prestigious course of this time, the Leith Links. You teed up your ball on sand and you carried six basic clubs under your arms (or more likely, your caddy's arms) - a long-nosed play club (driver), a putter, a couple of other long nosed woods and two irons: the "heavy iron" was used when the ball "lies deep amongst stones or mud," and the "light iron" used when the ball lies "on the surface of chingle or sandy ground" (Hoyle's, 1790, 288). As the names suggest, these two irons can be distinguished easily with the light iron being a comparably smaller and sleeker implement. The irons were forged and hand hammered by either an armourer who specialized in making and repairing arms and armour or a blacksmith who did this as a sideline to horse shoes and tools. He heated and hammered a rod or bar of iron until it was relatively flat, then one end was forged around a mandrel to form a hosel. As the sides came together, overlapping, a seam running down the hosel appeared, and then was blended together by hammering. It is part of an exclusive group of twelve such examples known in the world. This group includes two early irons at Royal Troon Golf Club, a further two at Royal Musselburgh Golf Club, one iron at the Royal & Ancient Golf Club at St. Andrews, four irons belonging to the Scottish nobleman the Earl of Wemyss (one sadly stolen in 1992) and two further irons held in private collections, one of these being a juvenile club. In particular this square toe light iron bears an extraordinary resemblance to the Troon light iron. It matches the Troon light iron in design, style, shape and size--every dimension is identical except for a 1/4 inch difference in blade length. Furthermore, with so few clubmakers operating in these early times the probability is high that these two irons were crafted by the same clubmaker. This club bears all the hallmarks of what scholars have termed the "first generation" square toe light iron club - a blade that rounds up and sweeps up the hosel so that visually there is no distinct point where it can be determined that the hosel finishes and the blade begins. Second generation irons, in contrast, possess a sharp crease at the point where the top of the blade intersects the side of the hosel. During the 1700s the square toe became increasingly abandoned in favor of a round toe blade. There are about 25 second generation square toe irons known, all possessing a sharp blade crease, and overwhelmingly dating from the 18υth century. All early irons were forgen from wrought iron and have a blackish color and a somewhat pitted texture, consistent with the effects of oxidation of the iron over the centuries. The wooden shaft on this club was secured by nail pinning and by crimping down the shaft at the top of the hosel, a method known as 'nicking'. When this iron head was acquired in 1991, it was simply an iron head with no shaft. Mr. Ellis crafted the shaft from an ash handle originally fastened in an antique gardening tool. The head can be taken off the shaft and displayed on its own or it can be displayed with the shaft in place. When the head is off, one can observe the inside hammer weld. This club offers a rare historic glimpse into the early days of a magnificent sport that has been played by Dukes, Kings, (Golden) Bears and Tigers. Please see page 193 for a larger photo of this club.