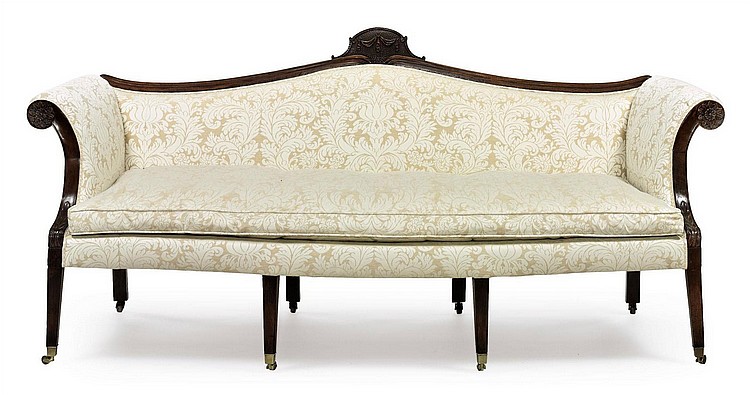 PROPERTY FROM A CALIFORNIA COLLECTION

With its serpentine molded crest centering a raised tablet with double-swag carving and distinctive eight-star punchwork, the settee offered here is part of a group attributed to the master Salem carver Samuel McIntire (1757-1811). McIntire's designs are well documented in surviving examples of similar sofas, along with records of his work from 1790-1810, including bills detailing his involvement in the construction and decoration of the Derby family homes in Salem (Swan, "Where Elias Hasket Derby Bought His Furniture," The Magazine Antiques (November 1931), pp. 280-282). The construction and carved elements on this sofa match the related examples in this group; all feature the same molded contours of the crest with a C-scroll bordered arched tablet, scrolled arms with carved circular grips, serpentine-front seat frames and square tapering legs.

Providing the basis of attribution for the entire group is McIntire's hallmark motif of a carved basket of fruit on the arched tablet. This design is found on at least four sofas and closely related baskets adorn several examples of furniture and architectural elements made for Elias Hasket Derby's homes. Though this sofa, along with another now in the collection of the Henry Ford Museum, features carved swags instead of baskets, the close similarities between the carved rosettes and waterleaf carving on the arm supports to the basket-carved examples support the attribution to McIntire. Apparently McIntire borrowed ideas for these embellishments from contemporary pattern books such as George Hepplewhite's The Cabinet-Maker's and Upholsterer's Guide (London, 1794), plate 19.

This sofa was noted to have been owned by Mira Chevalier Rueter (1876-1962) of Boston and Brookline, Massachusetts. The daughter of Samuel and Jeanette (Mann), Mira (or Mera, Myra, Midie) married in 1895 Ernest L.M. Rueter (b. circa 1870), who worked in his family's successful brewing company. As noted in US Federal Census records, the couple lived on Perkins Street in Boston until at least 1920 and in 1930, they were living on Clyder Street in Brookline. A block-front desk purchased by Mrs. Rueter from Israel Sack (1883-1959) in 1919 was recently sold at auction and it is possible that she acquired this sofa from the same source. Establishing his business in 1905, Israel Sack was the leading dealer in American antiques in Boston during the time the Rueters were living in the city. See Men of Boston and New England (1913), p. 151; Skinner, 7 June 2009, lot 186).