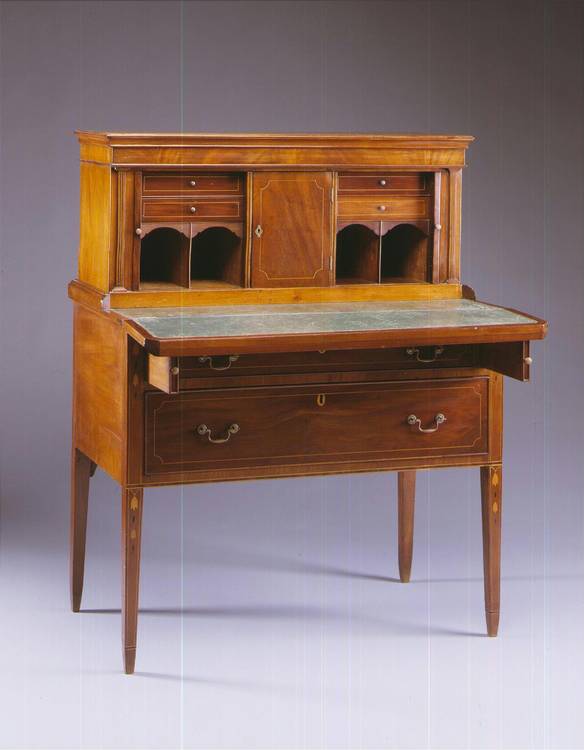 legs repaired at juncture with case. The attribution of this desk to the Salem cabinetmaker Elijah Sanderson (1752-1825) is based on the initials E S branded on the backboard of the lower case. On an 1803 invoice, Elijah Sanderson noted that ``...my furniture is all marked with a brand ES on the back of each piece," (Mabel Swan, Samuel McIntire, Carver, and The Sandersons, Early Salem Cabinet Makers, 1934, p. 9). This brand is known on a mahogany card table and commode, both in private collections (William Ketchum, American Cabinetmakers, p. 294). Born in Watertown, Sanderson moved to Salem by 1779 and operated, with his brother Jacob, (1757-1810) Federal Salem's largest cabinetmaking establishment. They directed a furniture cooperative with Nehemiah Adams (1769-1840), Edmond Johnson (working 1793-1811) and William Appleton (1765-1822), using a piecework system, with each cabinetmaker making particular components. Together, the cabinetmakers produced furniture for export and sold their wares around the globe, including at ports in Brazil, West Indies, Africa, and Calcutta, India (Margaret Burke Clunie, ``Salem Federal Furniture,'' M.A. Thesis, University of Delaware, 1976). Literature: Decorative Arts Photographic Collection, Winterthur Museum, February 1970

The Collection of Mr. and Mrs. Lammot du Pont Copeland