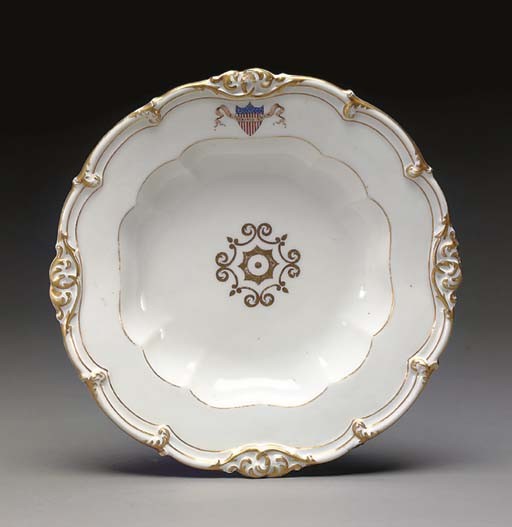 The Early Republic marked the beginning of important traditions and treasures in the development of the new nation. Presidential porcelain would become a valuable representation of personal, public, and period tastes. These services reveal their true beauty in the spirit and history they depict. Individually and collectively, the following patterns featuring selections from the presidential administrations of: James Monroe (Fifth President, 1817-1825), Andrew Jackson (Seventh President, 1829-1837), James K. Polk (Eleventh President, 1845-1849), Abraham Lincoln (Sixteenth President, 1861-1865), Ulysses S. Grant (Eighteenth President, 1869-1877), Rutherford B. Hayes (Nineteenth President, 1877-1881), and Benjamin Harrison (Twenty-Third President, 1889-1893), exhibits the interest our founding fathers took in building a country and civilization that would embody the ideals of freedom along with a strong sense of the arts and culture.
For a further discussion see Margaret Brown Klapthor, White House China: 1789 To the Present, Second Edition (New York, 1999).

In March 1846 Alexander Stewart & Co, a famous dry-goods house in New York City, procured a new state service for the president. As the example shown here, the pattern had a molded and gilded rim with the shield of the United States, the first service pattern to bear the red, white, and blue emblem. For further discussion and a related example see Klapthor, p. 68-70.

Important American Furniture, Folk Art, Silver and Prints including The Garbisch Collection from the Sky Club