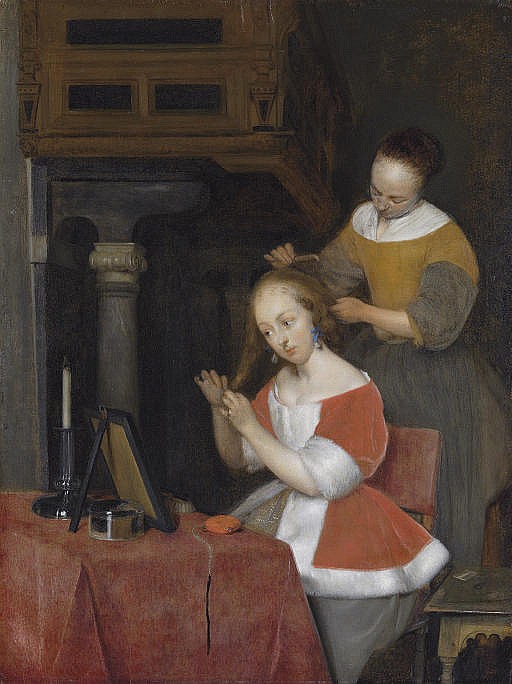 A lady at her toilet

VAT rate of 5% is payable on hammer price and at 17.5% on the buyer's premium.
This is one of the very rare examples of Ter Borch's genre scenes to appear on the open market. In recent years, only a handful have been offered at auction, indeed arguably the last of comparable quality was that sold, Sotheby's, London, 7 December 1988, lot 100 (£594,000), five years before the previous sale of the present painting. As noted by Gudlaugsson, loc. cit. , this composition is one that Ter Borch adapted in other instances, for example the Lady dressing her hair of circa 1657 in the Wallace Collection, London (inv. no. P235). Interestingly, the elaborate chimneypiece also appears in not only the Wallace Picture, but also A lute player with a boy in the Koninklijk Museum voor Schone Kunsten, Antwerp (inv. no. 349), and the Suitor's Visit of circa 1658 in the National Gallery of Art, Washington (Andrew W. Mellon Collection, inv. no. 1937.1.58).

Such repetition of motifs is common to much of Ter Borch's work, particularly his genre pictures; other elements of the present work, including the little mirror, the candlestick and the powder box recur in slightly different forms in others of Ter Borch's works, and this varying recurrence strongly suggests that the artist employed real objects as props for his compositions. Gudlaugsson dates this picture to circa 1670, and notes that a similar arrangement of those objects occurs in other works of the period, including the Portrait of a gentleman in the Museum, Zwolle; and the Portrait of Freda Quadacker in the Bute collection, Mount Stuart. He also notes that the facial type of the young lady is comparable to those in two other contemporaneous works: the Duet in the Louvre, Paris, and the Recital in the Gemäldegalerie, Kassel.

Ter Borch's works were widely copied in his own lifetime, for the most part by pupils working with him (the most famous being Caspar Netscher). A number exist after the present composition - Gudlaugsson lists nine, and notes that it was possible that the painting remained in Ter Borch's workshop (possibly during the upheavals of 1672-3 when Deventer was overtaken by forces from Münster and Cologne allied to King Louis XIV of France) and was used there as a model for his pupils.

Jan Jansz. Gildemeester's father was a merchant and Consul-General in Lisbon until the mid-1750s, when he returned to Amsterdam to set up a trading company with his sons Daniel and Jan Jansz. In 1778 the Dutch Republic appointed the latter as agent and Consul-General to Portugal, although he remained in Amsterdam. In 1792 Jan Jansz. moved from the Keizergracht to the Herengracht in Amsterdam, where his extensive art collection had a setting worthy of it: Adriaan de Lelie's painting of the collection (Amsterdam, Rijksmuseum) gives an accurate record of the display of the paintings, which were spread all over the house. Gildemeester's taste followed the contemporary Dutch fashion: his collection included the best representatives of Dutch and Flemish 17th- and 18th-century art of which perhaps the most celebrated today are Frans Hals's Laughing Cavalier (London, Wallace Collection) and Vermeer's Astronomer (Paris, Louvre).

It also included a remarkable ten paintings by Van Huysum (for example the Flowers in a Terracotta Vase in the National Gallery, London) as well as works by Gerrit Dou ( A lady playing the clavierchord ; London, Dulwich Picture Gallery), Pieter de Hooch ( A lady preparing bread and butter for a boy ; Los Angeles, J. Paul Getty Museum), Adriaen van de Velde ( The Shepherdesses , Windsor Castle, Royal Collection), Rubens, Jan Steen, Philips Wouwerman, Jacob Ruisdael and Gabriel Metsu. The present picture was the following lot to (and compared in the catalogue with) one of Ter Borch's masterpieces, The Letter , now also in the Royal Collection.