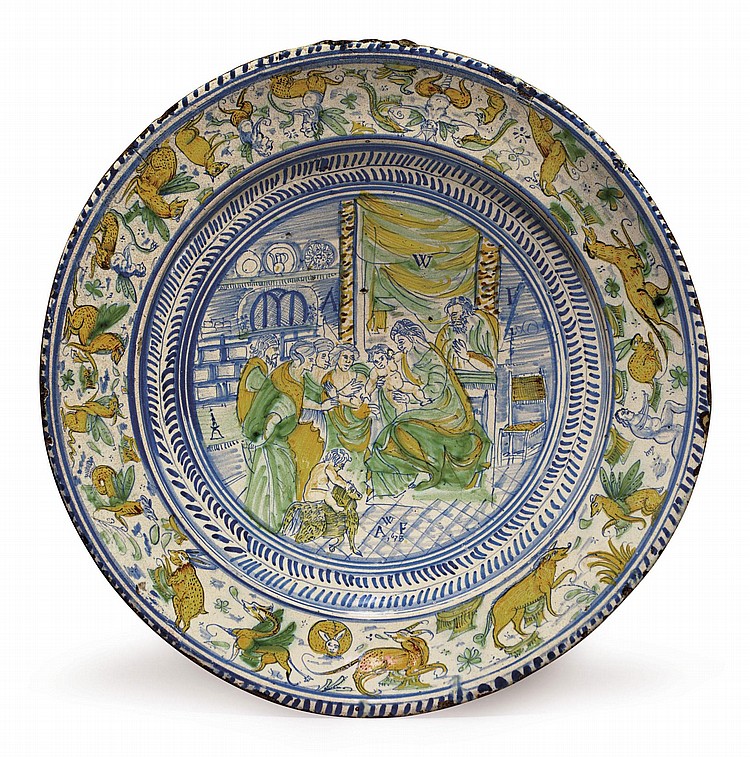 A LONDON DELFT DATED POLYCHROME DISH
1638, SOUTHWARK, PICKLEHERRING QUAY OR MONTAGUE CLOSE, THE UNDERSIDE PAINTED IN BLUE WITH THE INITIALS RI, PERHAPS FOR RICHARD IRONS
Painted in blue, green, yellow, ochre and brown with the Adoration, in an interior before drapery, furniture and utensils, the upper part with the initials W/AF for Aaron and Frances Wit, the initials repeated on the lower part of the vignette above the date 1638, and as a conjoined monogram on the reverse, within concentric circles and herringbone-pattern, the grotteschi border painted with animals, figures and mythical beasts, within a blue line and dash rim, the reverse with straw colored slip and lead glaze, the footrim twice pierced
16½ (41.9 cm.) diameter

Although other delft dishes painted with biblical scenes within decorative surrounds are known, the present dated example is perhaps unique in its scale, sophistication of design and quality of execution.
For a charger dated 1648 on which the painter has also combined a biblical subject with an Italianate border, see John C. Austin, British Delft at Williamsburg, Williamsburg, Virginia, 1994, p. 127, no. 153; also Louis L. Lipski and Michael Archer, Dated English Delftware, Tin-Glazed Earthenware 1600-1800, London, 1984, pp. 24-25, 28, nos. 34-35 and 49 for examples dated 1659, 1660 and 1665.

This style of decoration was likely inspired by Italian Renaissance maiolica made at the Patanazzi workshop in Urbino and at Montelupo. The scene itself is likely based on an as yet unidentified biblical woodcut of the 17th century, although the Phillips catalogue notes Frank Britton's research into biblical subjects found on 17th century London dishes and suggests a Bible in the British Library that may be the source (C7D 15-18).

For a charger in the Burnap Collection contemporary with these dishes, initialed 'B/LE', dated '1652', and painted overall within a blue-dash rim with the Adoration, the scene set in a traditional manger, see Ross E. Taggart, The Frank P. and Harriet C. Burnap Collection of English Pottery in the William Rockhill Nelson Gallery, Kansas City, 1967, p. 45, no. 79, cl. pl. 1.

The initials on the front and back of the Longridge dish are for Aaron Wit and Frances Allen who married on 9 July 1638 at Saint George the Martyr in Southwark. Thus the choice of subject for a dish celebrating a marriage is most apt. Although the positioning of the figures is that traditionally found on Renaissance paintings, posing the Holy Family inside a contemporary northern European interior was a bold choice on the part of the pottery painter, whose initials appear on the underside of the dish. Clearly 'R.I', they may be those of Richard Irons, perhaps the potter or painter of this dish, buried in Southwark in 1664.