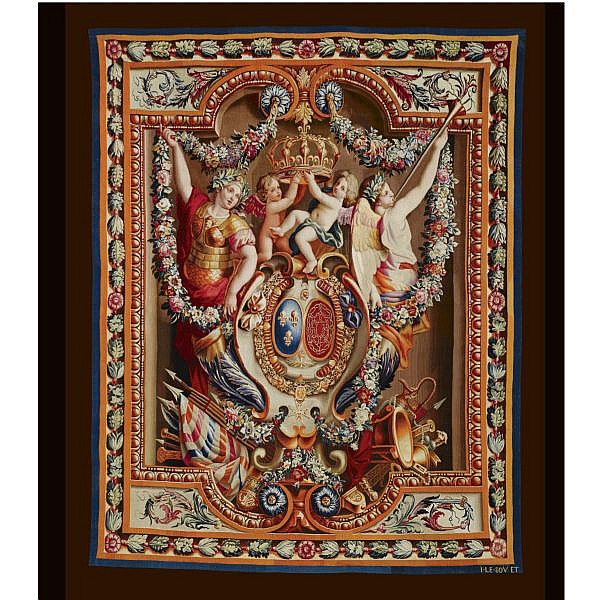 - A Louis XIV Tapestry `Portière des Renommées', Gobelins, workshop of Jean Le Souet, after Charles le Brun, with the Royal coat-of-arms of France and Navarre circa 1693-1700

woven with the central Royal coat-of-arms of France (three fleur-de-lys on blue ground) and Navarre (open linked chains in design of escutcheon on red ground), the paired cartouches above a crowned `L', with cross palms, all within the collars of the Order of St. Michel (collar with `S' links and shells and pendant with St. Michael overthrowing the devil, Chivalric order established by Louis XI of France in 1469) and Order of St. Esprit (collar with fleur-de-lys, `H' for King Henry, military trophy group, all linked with flames, with a blue sash, and pendant with Maltese cross overlaid with a flying dove, Chivalric order founded by Henry III in 1578), set against a scrolling sculptural cartouche, surmounted by two balancing putti holding the Royal closed crown (post 1589), the grouping flanked by cornucopia wrapped with acanthus leaves and issuing demi-figures, personifying Fame, both with swathed drapery and wearing laurel wreaths, the right leftward facing profile figure is winged and blowing a long trumpet (symbolic of good repute), the other inward facing figure wearing stylised armour, both holding up floral swags issuing from floral medallions above, the lower section within the `c'-scrolls, encloses the end of the maces of the chancellery, and military trophies of standard, fasces, spears, swords, arrows and trophies of victory in the form of jewellery and elaborate gilt-metal luxury items, all within a narrow inner banded bead-and-reel and gadrooned border, shaped at the top and bottom with `c'-scrolls, the corner shaoed entablature with scrolling foliage on cream ground, and all surrounded by a narrow outer four-sided border of tied alternating sprigs of leaves of laurel (victory), oak (fidelity) and ivy (immortality) with central and corner copper coloured foliate medallions, with a narrow banded yellow and blue selvedge, the outer blue selvedge with the workshop mark, bottom right, I.LE.SOVET

S.A.R. le duc de Vendôme, sold Galerie Georges Petit, Paris, 4 December 1931, lot 115, one of a set of four portières of Fame (including two by Souet of which only one, this lot, is illustrated);
Jean Bloch, sold Ader Tajan Rheims, Palais Galliera, Paris, 13 June 1961, lot 146;
Llhamy Hussein Pacha, sold Ader Tajan, Monaco, 14 March 1993, lot 189;
Collection of Monsieur and Madame Riahi, Christie's, New York, 2υnd November 2000, lot 58;THE DUC DE VENDOME
Emmanuel d'Orléans (b.1872), grandson of the duc de Nemours and great-grandson of the last King of the French, Louis-Philippe I. He married Princesse Henriette of Belgium in Brussels and lived in France at Neuilly and Cannes, and in England at Belmont in Wimbledon, and in Austria. He was the heir to his father, the duc d'Alençon (1844-1910). This Fame portière is apparently not recorded in the inventory of tapestries belonging to King Louis-Philippe carried out in 1852. It is possible, therefore, that the duc de Vendôme either inherited it from his mother, born duchesse de Bavière or bought it. In the sale of furniture from the château de Langeais in 1886 there was a Fame portière of slightly smaller size (285 cm. high; 230 cm. wide), lot 765.