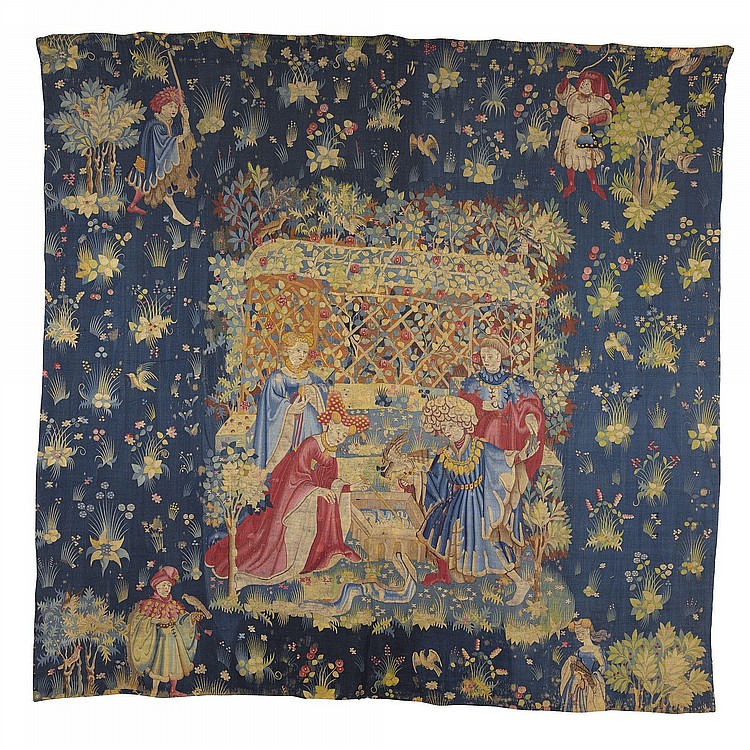 A MEDIEVAL FALCONRY TAPESTRY PANEL, SOUTH NETHERLANDS FIRST HALF 15TH CENTURY woven with courtly figures in circa 1420 costume, involved with the training process of the sport of `Hawking - Falconry', depicting a distinctive central enclosure with red rose covered trellis arbour, sheltering two ladies and two gentlemen gathered around a central stone basin containing water and with a rill flowing into the grassy and flowery mead foreground, enclosed by various small trees including the oak, rose, and `turf benches', each corner with a small tree, Linden, Oak and Cherry/Rowan trees flanked by a smaller figure, including three men and one female, all involved with Falconry, and carrying the accoutrements required for the sport, including lures, leashes, hoods and gauntlets, all against a highly stylised mille-fleurs background, incorporating small birds, all against a dark green ground; for a companion piece see the previous lot approximately 345cm. high, 358cm. wide; 11ft. 4in., 11ft. 9in.

The ideal of courtly society indulging in civilised pursuits and discussion in the countryside was a favourite theme in 14υth century literature and art, such as Boccaccio's Decameron, and followed through in the 15υth century in the evocative calendar miniatures of Paul de Limbourg's, Très Riches Heures for the Duc de Berry.

Medieval gardens were spiritual places and represented paradise on earth. The plants were central to judging the calendar year and the passing of the seasons. Gardens were often depicted in Spring time, and important as places for pleasure and utility. Many of the plants have symbolic meanings, medicinal roles, formed part of the culinary repertoire, were made into salves, dyes, cosmetics and oils, in addition to being fragrant and beautiful. In horticultural hierarchy roses and lilies, emblems of Mary and the mother of Christ, had precedence. Red roses also symbolised the blood of martyrs and with their heady scent, were revered as the breath of God on earth, the rose garden was particularly sacrosanct.

Flowers depicted in tapestries include honesty, corncockle, pinks, camomile, campion, carnations, dandelions, forget-me-not, irises, lilies, lily of the valley, Lords and Ladies, orchids, periwinkle, stock, strawberries, sweet rocket, aquilegia, viola and daisies. The plants depicted are nearly all widespread throughout Western Europe at this time, thus preventing identification of the countryside and therefore perhaps the weaving centre of mille-fleurs tapestries through the flowers and shrubs and local horticulture.

Medieval gardens always incorporated fruiting trees, as they had fragrant blossom, a canopy of leaves for protection during the heat, and fruit in the autumn. The trees are depicted out of scale and usually only as small trees, albeit with gnarled and developed trunks reminiscent of older and usually much larger trees. A. Cavallo, The Unicorn Tapestries of the Metropolitan Museum of Art, New York, 1998, pp.103-110, Appendix I: Floral in the Unicorn Tapestries, discusses the interpretation of the botany in 16υth century tapestry mille-fleurs grounds.

The garden depicted here is not so much a `Hortus conclusus', taken from the Song of Songs, and of Christian significance to Medieval society, with the depicting fountains and closed gates, but that of a paradise garden – secular paradise, and one in which wordly activities such as hunting are alluded to, sometimes with small animals in mille-fleurs backgrounds. Alternatively as in this tapestry with the inclusion of the ritual sport of falconry and hawking. For discussion of the mille-fleurs tapestries alluding to hunting, with small animals, see an allegorical mille-fleurs tapestry with scattered animals and small fruiting trees, Flemish, probably Bruges, dated about 1530-45, in C. Adelson, European Tapestry in the Minneapolis Institute of Arts, 1994, pp.105-115, cat.no.9.

For discussion of the 'Enclosed Garden', 'Fountain of Life' tapestries of the Southern Netherlands, dated the first quarter of the 16υth century, see Ebeltje Hartkamp-Jonxis and Hillie Smith, European Tapestries in the Rijksmuseum, Amsterdam, 2004, pp.45-47, no.8, and another `Hortus conclusus' tapestry panel, from the Bergisches Museum, Schloss Burg an der Wupper.

Tapestries of this genre were to cover walls from top to bottom and were usually without borders, and alluded to an extension of a natural landscape setting. Interestingly, in comparison to the images of the presently offered companion tapestries (lot 315 and 316) in situ in the 19υth century (see figs 1,2 & 3), there is a black and white photograph of two of the Cloisters Collection unicorn tapestries originally in situ at the Château de Verteuil, in around 1890-100. A. Cavallo, The Unicorn Tapestries of the Metropolitan Museum of Art, New York, 1998, pg.15. Equally the panels in each room show that the same subject could predominate and a series of similar panels used to cover the walls. Hunting, rather than classical and Biblical tapestries in the 15υth and 16υth century, were particularly popular as status hangings for domestic settings, and commissioned by nobility and merchants. Various hangings of the period are generically called Southern Netherlands, due to the extent of the influences across borders, in design and the actual weaving, making it very difficult without actual documented evidence, to specify the weaving location. The designers, artists, weavers and agents all moved around the area of the South Netherlands. In this region the owners of workshops and financial agents were always independent and there are scant remaining documents. The records for the Dukes of Burgundy for example fortunately show that orders for tapestries were placed through weavers and dealers in Arras or Tournai. Record taking regarding commissions improved with the introduction of state run workshops which started in 16υth century Florence.

`Honor making a chaplet of roses', A Southern Netherlands allegorical fragment, dated circa 1425-1450, is woven with very similar motifs, including the enclosure of three`turf benches', A. Cavallo, Medieval Tapestries in the Metropolitan Museum of Art, 1993, pp.148-155, cat.no.6. (Measurements 236cm. x 274cm; 7ft. 9in., 9ft.). Albeit a hanging of joined pieces and woven with narrative banderoles, it does show similarities of design. The figures bearing resemblance to the smaller figures incorporated in the corners of the presently offered tapestry panels, including the costume of the houppeland with jewelled girdle and coiffure of a wide jewel studded bourrelet, and the males have the early fashion of pointed shoes. The depiction of the mille-fleurs grass and some of the botany is very similar.

Interestingly there are two hangings, depicting `The Falcon's Bath', Southern Netherlands, 1400-1415, which are considered to have been woven after the same or similar cartoon, with one woven in reverse orientation, as in the presently offered tapestry panels (see Cavallo, ibid. pp.125-133, cat. no.3 & 3a). They are woven depicting a seated male and female (with similar bourrelet and houppeland) with a mille-fleurs foreground only, and fruit tree woodland background, incorporating smaller figures. The scene represents one of the numerous formal procedures in the long process of taming a wild hawk and preparing it for use in the sport falconry. The hawk with the aid of the stick is encouraged to bath, and therefore become accustomed to humans. Frederick II of Hohenstaufen, De arte venandi cum avibus, second quarter 13υth century, describes the process comprehensively, as does Henri de Ferrières, in the 14υth century manuscript Le livre du roy Modus et de la royne Ratio. Both have been cut on all sides. It is noted that in design they will have probably used a similar source to that which inspired the figural grouping in the tapestry of 'The Gift of the Heart', in the Museé du Louvre, Paris, of a similar genre to the present tapestries.

For a small fragment of a verdure with a rabbit warren, dated early 15υth century, Franco/Burgundian, against ground of green faded to blue, which has similarly highly stylised mille-fleurs motifs and small flowering trees, and in this instance small animals interspersed between, see G.F. Wingfield Digby, The Tapestry Collection – Medieval and Renaissance, Victoria and Albert Museum, London 1980, pg.21.cat.no. 9, black and white pl.17.

This early 15υth century, Southern Netherlands, series of tapestries comparable, in genre, date and costume, comprises of of four enormous panels, without borders, depicting, The Deer Hunt, The Boar and Bear Hunt, The Otter and Swan Hunt, and that of Falconry. These tapestries can be dated to circa 1430.

This late 15υth century, Southern Netherlands, set of seven `Unicorn Tapestries' from the Cloisters Collection is also a most useful allegorical hunting series to consider with the present companion panels and is discussed comprehensively in, A. Cavallo, The Unicorn Tapestries of the Metropolitan Museum of Art, New York, 1998. The unicorn has both secular and religious symbolism and is set in familiar contemporary botanical settings. The style of drawing, composition and costume in this unicorn series dates the panels to around 1495-1505, which is later than that of the present panels.