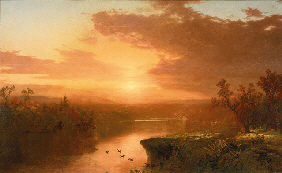 monogrammed initials and dated "J.F.K. 67" (lower right) oil on canvas 28 x 46 in. (71.1 x 116.8 cm) Provenance The artist The Rea Family, Pittsburgh Spanierman Galleries, New York Private Collection, Pittsburgh Private Collection Exhibited New York, National Academy of Design, The Forty-Second Annual Exhibition, 1868, no. 275 (as Indian Summer Lake George) Coe Kerr Gallery, New York, "American Luminism," October 25-November 25, 1978, illustrated in color in catalogue, No. 15, as Sunset over Lake George, 30 x 40 in. [sic] This painting will be included in the forthcoming John F. Kensett catalogue raisonné being prepared under the direction of Dr. John Driscoll. Indian Summer, Lake George is, by any standard, one of the most extraordinary works in Kensett~dq~s oeuvre. Like the White Mountain, Newport and Niagara paintings, these rare Lake George pictures constitute a distinct and important body of work in Kensett~dq~s career. In 1867, Kensett had reached the height of his powers as a painter of quiet, luminist coastal and lake scenes. Yet Indian Summer both looks back retrospectively to his earlier Hudson River style while simultaneously anticipating the painterly radiance of his "Last Summer~dq~s Work." The place is Lake George, Kensett~dq~s favorite inland subject and, by 1867, a mecca for artists attracted by its pure waters and changeful moods. Together with Lake George, 1869 (The Metropolitan Museum of Art) and Lake George, 1870 (Brooklyn Museum of Art), Indian Summer forms a trilogy of the only major salon-scale views in which the artist captures the full range of what Henry Tuckerman described as the lake~dq~s poetic and poignant nature at the moment of twilight. The season is Indian Summer, that peculiarly American spell of warmth that often follows the first bite of wintry frost. Past a great shelf of silhouetted rock, and bracketed by trees still clad in autumnal reds, the eye is led back to the distant shore, where a brilliant sliver of reflected light momentarily arrests the gaze. The sky, the clouds, and the distant hills beyond are all consumed by an exultant sunset, whose effulgent glow shapes and controls both the palette and design of the entire composition. Although Indian Summer still retains the specificity of place and season for which Kensett was so often praised in his lifetime, it is clear that the artist is here already exploring pictorial effects that would reach their culmination in such "Last Summer" works as Sunset on the Sea (1872; The Metropolitan Museum of Art). There are no humans present in Indian Summer, not a boater nor a hiker, neither cabin nor teepee. The only sign of animate life is a flight of ducks that rises silently in the foreground. That same flight of ducks appears, reversed, in one of Kensett~dq~s early masterpieces, A Reminiscence of the White Mountains, 1852 (Manoogian Collection), which, like Indian Summer, embodies the sublimity of a natural paradise as yet unspoiled by human endeavor. As a post-Civil War painting, however, Indian Summer~dq~s revisitation of Edenic imagery seems to convey a mood of lost innocence, rather than of Paradise regained. We are grateful to Dr. Bruce Chambers for cataloguing this lot.