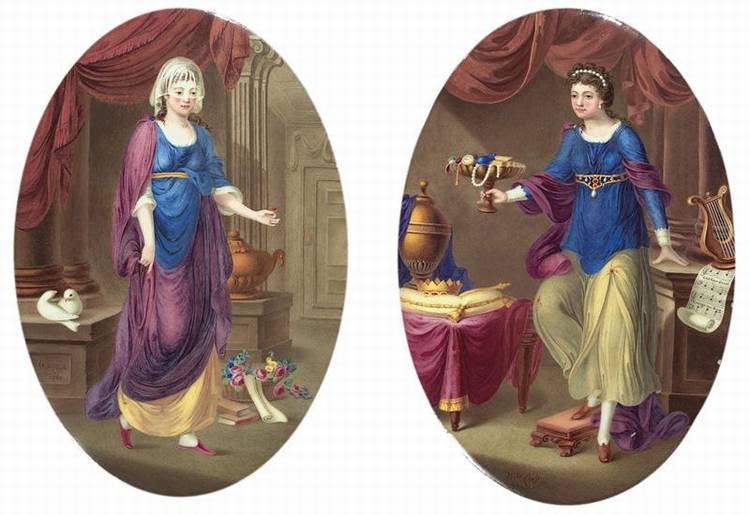 each depicting an allegorical figure in classical dress, one signed WH Craft. 1789., the other signed W:H: Craft. 1788., and with a sheet of music inscribed God save Great George our King.

William Hopkins Craft (1730-1811) was a well known enamel painter who is recorded as having exhibited examples of his work at the Royal Academy from 1774, his addresses including 100 St. Martin's Lane, 23 Church Street, Soho, and 1 Bedford Street. He showed portraits, decorative scenes, and allegorical subjects as in the present examples, although it was said of him that he was 'very good in manipulation, but very weak in art' (Foster, op. cit.) At one time he was in partnership with another artist David Rhodes, both being employed by Wedgwood, and his brother Thomas was a painter at the Bow porcelain factory. A number of signed works by Craft are recorded including a large oval plaque depicting a rustic scene in the manner of Boucher, and a pair of gilt metal mounted cassolets, dated 1787, in the Untermyer collection (Hackenbroch op. cit.)

A Celebration of the English Country House