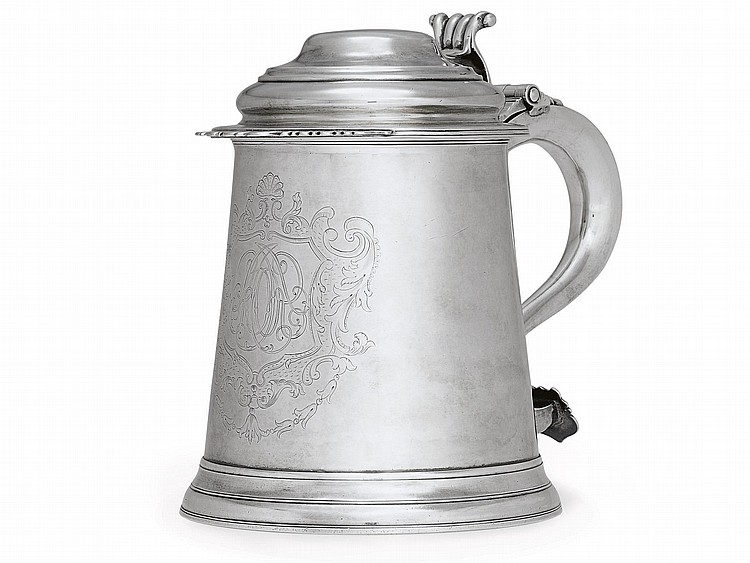 A RARE AND IMPORTANT SILVER TANKARD

A RARE AND IMPORTANT SILVER TANKARD
MARK OF ELIAS BOUDINOT, PHILADELPHIA, CIRCA 1742
Of heavy gauge, tapering cylindrical, with a molded circular base, the scroll handle with scroll thumbpiece and terminal formed as a shield, the double domed cover with serrated border, the body engraved with the mirror cypher GAO within a cartouche, marked twice on shoulder, the base with scratch weight 32=18 oz.
7¼ in. high; 32 oz. 10 dwt.

PROPERTY FROM THE COLLECTION OF MR. AND MRS. E.J. NUSRALA

This tankard was most likely made to celebrate the marriage of George Okill (b.c. 1715) and Anne Clarke (c. 1715-1777) in 1742 in Christ Church and St. Peter's, Philadelphia. Their daughter, Jane, inherited the tankard. In 1775, Jane married Reverend John Stuart (1740-1811), a special missionary to the Mohawk Indians at Fort Hunter, New York. During the Revolution, the family moved to Canada. The tankard was then inherited by one of their sons, Sir James Stuart. Stuart had a distinguished legal career serving as Chief Justice of Lower Canada (1841-1853), a member of the Legislative Assembly, Chief Justice of the Court of Queen's Bench, and helping to frame the Act of Union of 1840. Stuart died without heirs and the baronetcy became extinct. In 1969, the tankard was discovered in a London vault where it had lain since 1908.