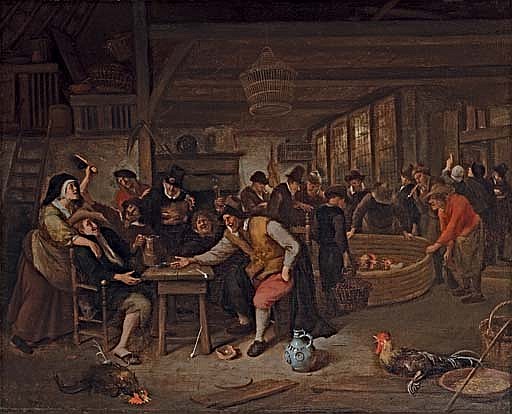 A tavern with cock fighting

Lot 29: A tavern with cock fighting

Raucous tavern scenes peopled by rough country types are among Jan Steen's most popular subjects. Embracing couples and drunken confrontation are to be expected in such scenes but the cause is not generally the outcome of a cockfight. The patrons of this tavern are divided into two groups, one revolving around the table at the left and the other surrounding the cockpit at the right, with the fights appearing in three stages. The pair in the foreground has just finished and the vanquished bird lies on its back, beak open and claws in the air, while a fight is underway in the makeshift ring at the right. The old man standing on the far side of the table and the young boy holding a cage with his back to the viewer wait for their turn to compete. The fate of the two birds in the foreground is mirrored by the postures of their owners, the man on the left pulling back from the table as the victor leans forward and confidently demands his winnings. The wine jug to the right of centre and the enormous tankard held by the man on the left signal the prominent role that drink has played in the festivities and the aggressive gesture of the woman comforting the loser suggests that events may soon get out of hand.

Accounts of cockfighting appear as early as the fifth century BC and it was a popular pastime through the fifteenth and sixteenth centuries, when it was associated with the festivities surrounding Carnival. Cockfights most often took place on Shrove Tuesday, the day before Lent, and it was considered to be an appropriate sport for boys. Indeed, schoolboys in twelfth-century England were given holidays specifically to train and groom their birds to take part in such competitions and schoolmasters handled the finances and directed the proceedings. Despite efforts to outlaw it in the thirteenth century, cockfighting became fashionable at court in France and England and its popularity continued well into the seventeenth century.

The ancient Greeks saw roosters as valiant, fierce and elegant fighters and the sport was thought to induce valour in soldiers and inspire them to put courage above all else. Thirteenth-century accounts refer to them as Apollo's 'rose coloured steeds' and liken their combat to Parthian warfare (Thomas Wright, De naturis rerum, 1863, pp. 391-2). The subject appears not only on Greek vase paintings and Roman reliefs but also in Romanesque church interiors alongside such sacred themes as the Flight into Egypt and the Nativity. The motif was standardized in Romanesque column capitals where the cocks are always shown in the midst of the fight, one clearly victorious over the other. The outcome is reflected in the expressions of the boys handling them, the winner celebrating with a wide grin and the loser holding his head in his hands lamenting his defeat. In the Christian context the cock could symbolize anything from the regenerative power of confession to the resurrection of the soul. In the book of Matthew (26:75), Peter denied Christ three times before the cock crowed but recognized his error with the light of dawn and repented. Dawn had long symbolized renewal and the cock, as its herald, was seen as the Christian soul's awakener, dispelling darkness and evil.

While Steen's A tavern with cock fighting bears no overt religious symbolism, the theme's rich iconographic and symbolic history may not have been lost on the painter himself. Indeed, holidays such as Carnival and Twelfth Night reflected the old Catholic calendar of feast days that were widely criticized by the Dutch Reformed Church as 'Popish' incarnations of pagan festivals. They featured prominently in comic theatre of the period and Steen depicted these subjects throughout his career, revelling in the irreverence of his subjects for Christian meaning. The man at the table on the right lifting his glass in the viewer's direction may well be a self portrait of the artist, who serves as a witness to the scene.

Important Old Master Paintings From The Collection of Jacques Goudstikker