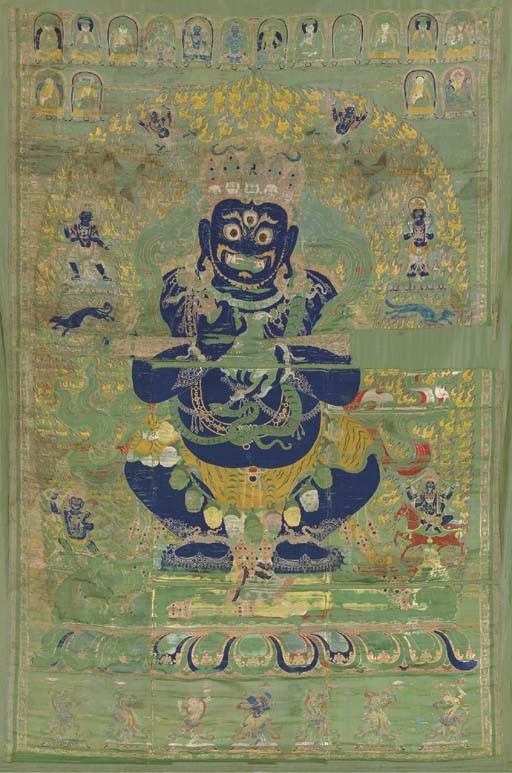 YONGLE SIX-CHARACTER PRESENTATION MARK AND OF THE PERIOD (1403-1425)

YONGLE SIX-CHARACTER PRESENTATION MARK AND OF THE PERIOD (1403-1425)
Exceptionally woven in lampas weave with gold and brilliant colored silk threads on a green satin ground, the central figure of Mahakala Panjarnatha, Lord of the Pavilion, holding a kartri or flaying knife and kapala or skull cup in his hands and with a jeweled baton supported across his forearms, the wrathful deity wearing a five-pointed crown set with skulls, his blue body with snake Brahmin-cords twining around his neck, arms and ankles, and a tiger skin and garland of severed heads encircling his waist, trampling beneath his feet a recumbent corpse figure supported on a lotus base, the surrounding flaming nimbus of pristine awareness depicting figures of the deities Bhutadamara Vajrapani and Kartaridhara Mahakala on the left, Ekajati holding a vase and Palden Lhamo riding an ass on the right, with further carrion animals, crows and apsaras, the upper register with sixteen initiation lineage figures, each with a niche-shaped nimbus, arranged in two rows across the top, including Vajradhara, various Tibetan teachers and leaders of the Sakya sect, the bottom register with seven retinue figures holding offerings, framed with a narrow border of double vajra and triple jewels, the upper right woven with a six-character Yongle presentation mark in a vertical line picked out in gold thread
Approximately 134 x 87 in. (340.4 x 221 cm.)

YONGLE SIX-CHARACTER PRESENTATION MARK AND OF THE PERIOD (1403-1425)

TEXTILES
THE PROPERTY OF A GENTLEMAN

This monumental example of lampas weave is staggering in its technical and aesthetic accomplishment. Created as a single loom width, its production would have required several weavers sitting side by side to handle the numerous shuttles that created the satin ground weave and the supplemental wefts that form the pattern. The weavers would have been supported by large teams of specialists, from technicians, who attended and serviced the loom, to the artisans, who prepared threads and wound them onto bobbins. The design draft was transferred to the loom by tying each of an estimated 8,000 warp threads individually and collectively to an astounding number of cords, which when pulled responded by opening a pattern shed. This preprogramming of the draw loom, checking that there were no errors in the tie up or in cords order so the pattern would read with the fluidity of an ink-line drawing, would have taken months. The scale of the piece would have required the precise coordination of weavers and the drawboy and his assistants, who were responsible for pulling the cords controlling individual warps in the precise order to achieve the design. Other technicians would have attended to the loom, maintaining warp tension as the warp was unwound and the finished cloth wound onto the breast beam. The investment in labor and materials to ensure the ritual significance of the finished piece was enormous, and rarely undertaken on such a scale after this period.

The deprivations of time and history are evident. There have been losses of both supplemental colored silk and gold threads. Reportedly the piece was cut into seven pieces during the Cultural Revolution and saved from total destruction by devotees who hid the pieces. Nonetheless, the integrity of the thanka remains intact. Although there are fragments of five other lampas thankas in the Riboud collection now at the Musée Guimet (see V. Reynolds, "Buddhist Silk Textiles: Evidence for Patronage and Ritual Practice in China and Tibet", Chinese and Central Asian Textiles: Selected articles from Orientations 1983-1997, Hong Kong, 1998, pp.196-8, [figs. 10, 12, 13, 14 and 15]), this is the only example that preserves the entire image. A larger lampas fragment, nearly the lower third of a Chakrasamvara thanka, was offered by John Eskenazi Ltd., London, in the 1990s (present location unknown, see V. Reynolds, op.cit., p. 196, fig. 11).

The Yongle presentation mark links the present lot to a famed set of embroidered thankas of the same date and roughly the same dimensions, one of which, depicting Raktayamari, was sold at Christie's, New York, 2 June 1994, lot 225 and again in Hong Kong, 29 April 2002, lot 242. The other embroidered pieces identified as from the same set are preserved in the Jokhang Monastery in Lhasa. See Zhang Zhongli, Wenwu, 1985: 11, pp. 66-71; Valrae Reynolds, op.cit., pp. 192-3; and also Michael Henss, "The Woven Image: Tibeto Chinese Textile Thangkas of the Yuan and Early Ming Dynasties", Orientations, November 1997, pp. 33-4. The Jokhang Monastery pieces depict Vajrabhairava and Chakrasamvara and were recently exhibited in The Treasures of Tibet II, Hong Kong Convention and Exhibition Centre, 25 November - 2 December 2005. At this time scholars are unable to reconstruct the iconographic program or determine how many pieces were in the set. Interestingly, the pattern details of the five of the six lampas fragments of Yongle thankas cited above are stylistically related to the embroidered set.

The results of University of Oxford OxA-1847 carbon 14 test are consistent with the dating of this lot.