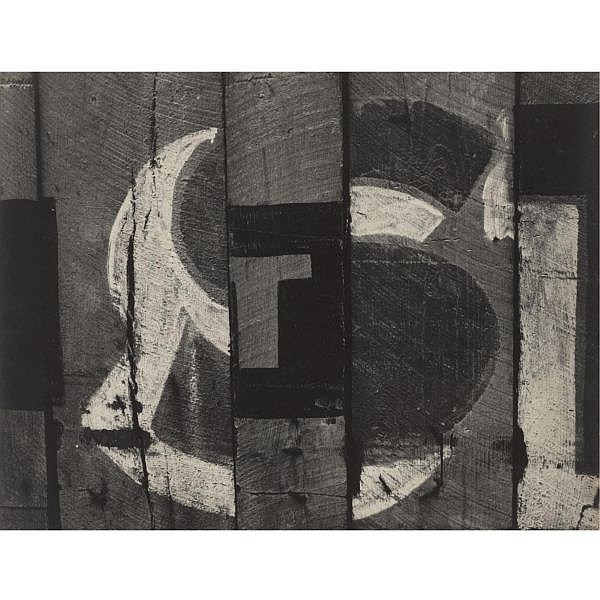 flush-mounted to Masonite, signed and dated by the photographer in pencil on the reverse, 1951; accompanied by a fragment of the Egan Gallery, New York, label, inscribed 'Siskind,' 'Photo '51,' and priced '35' by Egan in ink

PROPERTY ORIGINALLY FROM THE COLLECTION OF CHARLES EGAN
This early mounted exhibition print comes originally from the collection of pioneering New York City gallerist Charles Egan (1911-1993). Between 1947 and 1954, Egan held five exhibitions of Siskind's photographs in his mid-town gallery--a remarkable venture, given the lack of any real market for fine-art photography at the time. The original Egan Gallery label which accompanies this photograph prices it at $35. The photograph failed to sell during the gallery exhibition, proof that both Siskind--as a photographer--and Egan--as a gallery owner--possessed a vision that was, for the most part, beyond the comprehension of the marketplace of the day. Siskind was introduced to Egan by the painter Barnett Newman in 1947. Egan's gallery was one of the first venues for the work of the most adventurous artists of the day, including Franz Kline, Willem de Kooning, Isamu Noguchi, and Joseph Cornell, long before their artistic contributions had received widespread acknowledgement, and well before handling the work was a lucrative prospect. Egan's willingness to show unproven art led him to offer Siskind a series of one-man exhibitions. While Siskind would be the first photographer shown by Egan, he was not the last. In 1949, Egan offered Siskind's friend, the photographer and artist Frederick Sommer, his first solo exhibition of photographs and drawings. Siskind made Harlan, Kentucky, during the summer of 1951, while teaching photography alongside Harry Callahan at the progressive Black Mountain College near Asheville, North Carolina. Black Mountain's faculty consisted almost exclusively of figures who would become legends in their respective fields, Josef Albers, John Cage, Franz Kline, Buckminster Fuller, Clement Greenberg, Charles Olson, Robert Creeley, and Merce Cunningham among them. During the summer of 1951, Robert Motherwell and Ben Shahn taught separate painting courses, and Robert Rauschenberg and Cy Twombly attended as students. Siskind used Black Mountain as a launching point for photographic excursions into the surrounding area and Kentucky. In Harlan, he made an extensive series of photographs of a wall made from old wooden planks originally painted with signage. The photograph offered here comes from this series and incorporates the abstraction present in the work of Motherwell or de Kooning, yet is filled with photographic detail. This image is reproduced in Siskind's first monograph, Photographs (New York, 1959), which is dedicated to Charles Egan. As is characteristic of the prints Siskind showed at the Egan Gallery, the photograph offered here is mounted to thick Masonite, a treatment which gives the print a three-dimensional presence on the wall not typically associated with photographs. 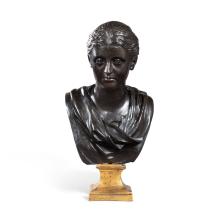