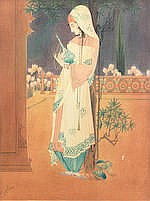 Provenance:Private Collection, Dubai;Delhi Art Gallery.Probably the most distinguished Pakistani artist of the 20th century, Chughtai looked at the complex and varied history of South Asia, to create a modern rendition of archaic fables. His work is beautifully nostalgic and thus shares some of the longevity of the tales it recounts. After partition of the subcontinent he came to be known as the National artist of Pakistan. In 1911 Abdur Rahman Chughtai joined Mayo School of Art (now known as the National College of Arts, Lahore) where he was taught by Samarendranath Gupta, a pupil of Abanindranath Tagore. Tagore was seen as the founder of the Calcutta based, Bengal School of art. The tendency to group him together with the Bengal school of painters was contested by the artist, who stated that contrary to Bengal art, which "favoured gods and goddesses and was full of pessimism and gloom, ... his art was radically different because it inculcated hope and faith in life." (Akbar Naqvi, Image and Identity: Fifty years of Painting and Sculpture in Pakistan, Karachi, 1998, pp. 51-54)Chughtai had a very distinctive style, incorporating the art nouveau, Indo-Persian miniature technique and Indian folklore. Hailing from a family of artisans and craftsmen, Chughtai used only the finest materials for his work, and so with each drawing or painting he created a leaf of quality and importance - a homage to the Mughal and Persian miniature traditions he was so heavily influenced by. The artist chose to paint Mughal, Iranian, Hindu, Punjabi, Kashmiri and Brahman subjects and later expanded to incorporate a 'pan-Persianism'. The iconography of 'The Saqui' suggests that we are in the presence of Saqui (literally 'wine-server'), an allegorical tool frequently employed in Persian and Urdu mystic poetry. Saqui, the 'Server' who pours intoxicating libation into the empty cup of the self-less seeker, is the symbol for the presence of the Beloved or Divine. Favoured as a literary device by Islamic poets from Hafiz to Ghalib for allowing dual allusions to both God and earthly love, Saqui is often given the trappings of a beautiful seductress, sometimes quite explicitly sexual. Though Chughtai has treated this subject before, it is of interest to note that whilst his Saqui figures are indeed attractive, sometimes ethereal, they remain chaste, emanating archetypal beauty within the parameters of tradition. In other words, she exists simultaneously in the present and a poetically romanticised past, she is both Saqui and aide.