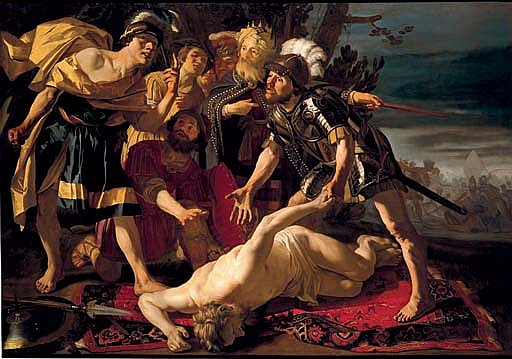 Achilles preparing to avenge the death of Patroclus

Lot 132: Achilles preparing to avenge the death of Patroclus

Probably acquired by the Achille-Fould family in the 19th century;
Château de Beychevelle, Pauillac, France until 1977.

This is Dirck van Baburen's largest painting and is most likely the last work he ever produced. It is signed and dated 1624 and the artist died in February of the same year. Achilles spurred into battle by the death of Patroclus is one of several ambitious large-scale history subjects that Baburen painted in the years after his return from Italy in 1621. It combines erudition and supreme technical accomplishment and reveals Baburen's heightened interest in visual drama and narrative intensity. Of all of the episodes from Homer's Iliad , Baburen chose one of the least popular and most intense, a turning point in the poem and a critical moment in Achilles' development. His depiction of the subject, with Patroclus' weighty corpse leaning into the viewer's space, announces to his Dutch patrons his mastery of the genre of history painting and his facility with the lessons learned from Caravaggio, Titian and Rubens.

At the beginning of book sixteen Achilles discusses the state of the Trojan War with his childhood friend Patroclus. The Greeks had suffered devastating losses and Patroclus expresses his sadness only to be mocked by Achilles who likens him to a little girl clinging to her mother's dress. Achilles refuses Patroclus' plea to re-enter the battle but allows him to fight in his place wearing his armor. Patroclus is soon after killed by Hector and stripped of his armor on the battlefield, a devastating loss for Achilles that sets in motion the course of events that unfold in the rest of the Iliad . Achilles responds to his friend's death with guilt, rage and a desire for revenge so violent that it shocks even the gods. After killing Hector, Achilles ignores the rules of war and desecrates his enemy's body (and with it his own integrity), dragging it behind his chariot around Patroclus' grave for days on end instead of allowing the Trojans to honorably dispose of it.

Baburen depicts the moment when, after retrieving Patroclus' body, which had been protected on the battlefield by Menelaus, Achilles swears revenge and decides to return to battle. Leonard Slatkes ( op. cit. ) suggested an alternate reading of the painting, identifying the protagonist as Mucius Scaevola on the basis of the left-handed gesture (Scaevola means left-handed). Livy (2:12-13) relates how the Etruscan forces, led by Lars Porsena, King of Clusium, were besieging Rome. When a brave young nobleman, Caius Mucius, penetrated the enemy lines in disguise, he mistakenly killed the king's secretary instead of Porsena himself and was apprehended. In order to prove to the king how willing he was to sacrifice his own life for the freedom of his city, Mucius thrust his right hand into the fire and let it burn. Porsena, impressed with his fortitude, released him. With this reading, the body on the ground would be that of the secretary, while the King, Lars Porsena, stands behind him looking on in amazement. It is unusual, however, to represent the king's secretary naked and the entire narrative is dependent on the existence -- indeed, the centrality -- of the fire and there is no evidence that the canvas was once extended enough on the left to accommodate it. The king standing behind the soldier at the right is almost certainly Menelaus, brother of Agamemnon and King of Sparta, who protected Patroclus' body on the battlefield ensuring that he was returned to Achilles unmolested. He gestures towards the battlefield encouraging Achilles to resume fighting while his men look on in shock.

This episode in the Iliad is rare in both Italian and northern painting and earlier examples of its treatment are difficult to find. More popular among Baburen's contemporaries was the humorous subject of Achilles hiding among the daughters of Lycomedes and, apart from Pietro Tacca's 1634 restoration of the ancient sculpture depicting Menelaus supporting the body of Patroclus (Loggia Lanzi, Florence), one has to look to eighteenth and nineteenth-century art to find the theme with any frequency. Greuze and David both painted the funeral of Patroclus while artists such as the English neo-classical sculptor, Thomas Banks, depicted the same moment as Baburen but with greater sentimentality (see his Thetis and her nymphs rising from the sea to console Achilles for the death of Patroclus at the V&A, London).

Baburen was adventurous with subject matter particularly after his return to Utrecht in 1621. Indeed, he was the first to paint the subject of Granida and Daifilo (Private Collection, New York) from P.C. Hooft's Gerusalemme liberata a subject that played a crucial role in defining the pastoral mode in the Netherlands and that became a favourite among later Dutch Classicists. The years between 1621 and his death in 1624 seem to have been particularly creative for Baburen and it is during these years that he painted The Chaining of Prometheus (1623, Rijksmuseum, Amsterdam) and Roman Charity (City of York Art Gallery), both similarly dramatic full length compositions based on classical sources. The terrified figure of Prometheus, falling into the viewer's space with arms outstretched almost the width of the canvas, is the visual opposite of the inert Patroclus, whose palpable weight becomes the symbol of Achilles' despair and the source of his ultimate downfall.

When considering what these subjects meant to Baburen and his contemporaries, it is significant that his Prometheus was sold in 1707 with a now lost pendant depicting Adam and Eve . The pairing of these subjects suggests classical and biblical parallels and do not seem to have been limited to public settings such as town halls. Indeed, Granida and Daifilo was a commission from the Utrecht nobleman Peter van Hardenbroeck who had himself painted as Daifilo, one of the earliest examples of pastoral portraiture.