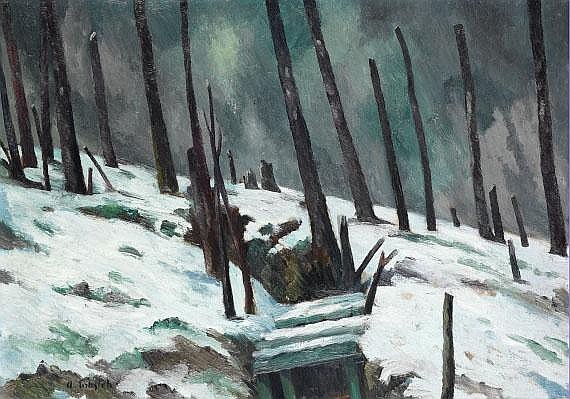 Adolf Erbslöh (1881 New York - 1947 Irschenhausen). Zerschossener Wald bei Verdun. Um 1916 Oil on cardboard, mounted on stretcher. Signed lower left.69,5 x 99 cm (27,3 x 38,9 in). Provenienz: Private collection Germany. Adolf Erbslöh was born in New York, where his father was in business, on 27 May 1881. The family returned to Germany some years later. After training in business for half a year, Adolf Erbslöh enrolled at the Karlsruhe Art Academy, where he made the acquaintance of Alexander Kanoldt, who would remain a life-long friend. In 1904 Adolf Erbslöh transferred to the Munich Art Academy to continue his studies with Ludwig von Herterich. Encountering Alexej von Jawlensky was the decisive impetus that would give momentum to his further development as an artist. In 1909 Erbslöh was the secretary in the founding circle of the Neue Künstlervereinigung in Munich, which included Kandinsky, Jawlensky, Kanoldt, Münter, Werefkin and others. From it grew 'Der Blaue Reiter". A salient feature of the new art was a stringently stylised handling linked with intense colours and an emphasis on rhythmicising surfaces that reveals its affinities with Expressionism. Following a trip to Italy, Erbslöh was conscripted in 1914 and served as a war painter on the Western Front throughout the first world war. In 1916 Erbslöh was dispatched with the 95th Infantry Regiment to Verdun. He wrote from France: 'I am overjoyed at this prospect. I long had the desire to work in art abroad. [...] Were it not for hearing the almost incessant thunder of the canon, one would not even think of the war. On the whole, it's quite quiet in Verdun yet the artillery is never entire quiet." (quoted in: Adolf Erbslöh in den Familienberichten [Family Reports] 1914-1918 des Familienverbandes [Extended Family] Julius Erbslöh, www.erbsloeh.org/to/adolf14-18.htm, state 28 April 09). Black and menacing, charred tree trunks rear out of the snow-covered ground. Veiled in fog, night breaks over the theatre of operations and a view of a trench leaves viewers with a dull foreboding of pain and horrors to come. Yet such is Erbslöh's painterly treatment that he has managed to wrest something of the beauty of a landscape painting from this intractable motif. The artist's deft handling has captured the refraction of light on the snow and the diffuse atmosphere to achieve a powerful work. In 1916 Erbslöh joined the 'Munich New Secession". The 1920s found him travelling extensively and painting numerous landscapes on his journeys. The mountain motif especially was varied over and over again. From 1933, however, it was no longer possible for Erbslöh to show his work publicly. The artist lived in retirement with his family at Irschenhausen. Far from the modish mainstream, Erbslöh became a leading exponent of Classical Modernism. Without pandering to popularity, his work reflects the heady developments that took place in art during the first half of the 20th century. [AS]. Colours in good and fresh condition. Edges with tiny isolated colour losses and rubbings, due to the framing. Tiny brown stain in the centre of the sky.