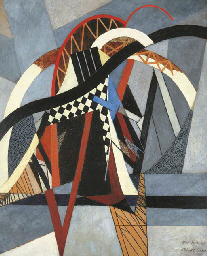 Brooklyn Bridge signed, dated and inscribed 'New York 1915 Albert Gleizes' (lower right) oil and sand on cardboard 581/4 x 47 3/8in. (148.1 x 120.4cm.) Painted in 1915 PROVENANCE Madame Juliette Gleizes, the artist's wife. Collection Pierina de Gavardie, Paris, by whom purchased from the above in the early 1960s. LITERATURE Cimaise, no. 91-92, 1969, p.54 (illustrated). D. Robbins, Albert Gleizes: Catalogue raisonn‚, Vol.I, Paris, 1998, no.645 (illustrated p.226). EXHIBITION Rome, Galleria Anthea, 9 Cubisti, May 1963 (illustrated). Grenoble, Mus‚e de Peinture et de Sculpture, Albert Gleizes et Tempˆte dans les salons, 1910-1914, June - August 1963, no. 10 (illustrated). New York, Solomon R. Guggenheim Museum, Albert Gleizes 1881-1953: A Retrospective Exhibition, 1964, no. 563.64. Paris, Mus‚e d'Art Moderne, Albert Gleizes 1881-1953, Exposition retrospective, December 1964 - January 1965, no. 43 (illustrated). Dortmund, Museum am Ostwall, Albert Gleizes 1881-1953: Retrospektive, March - April 1965, no. 43 (illustrated). Courbevoie, Mus‚e Roybet-Fould, Albert Gleizes 1881-1953, 6 November - 20 December 1971, no.46 (illustrated). Paris, Centre Georges Pompidou, Paris New York 1908-1968, June - September 1977 (illustrated, p.452). NOTES Painted shortly after his arrival in New York, Gleizes's Brooklyn Bridge is a dynamic image of the iconic Manhattan landmark filled with the bustle and movement of a vibrant metropolis. After his military service, Gleizes and his wife left France for New York. There, at a distance from the war, the influence of the New World took hold of the young idealist, and his art was immediately intoxicated by the sense of civic modernity that surrounded him, by the sheer scale of the great city. His art was filled with the landmarks and nightlife of New York, notably in several depictions of Brooklyn Bridge. The contrast between the sweeping girders and the constant traffic traveling across the bridge were the perfect subject matter for a Cubist interested in the interplay between people and technology. Brooklyn Bridge, with its swirls of multicoloured structure and the concentric glare of headlights, is a raw yet lyrical image of dynamism itself. Even the scale of the work conspires to fill it with a monumentality that fully translates Gleizes's own admiration for his new surroundings. From the minute he had landed, his presence in the United States filled his work with confidence. Brooklyn Bridge appears to be the first work in which Gleizes used sand in his painting, helping add texture to his work and making a scumbled, uneven surface reminiscent of the tarmac. He continued his dynamic compositional experiments for two years until 1917, culminating in a work entitled Huston Bridge which both in size and impact bears great similarities to the present work. From 1917 onwards Gleizes continued with his own artistic vocabulary which had been forged in these crucial two years in America.