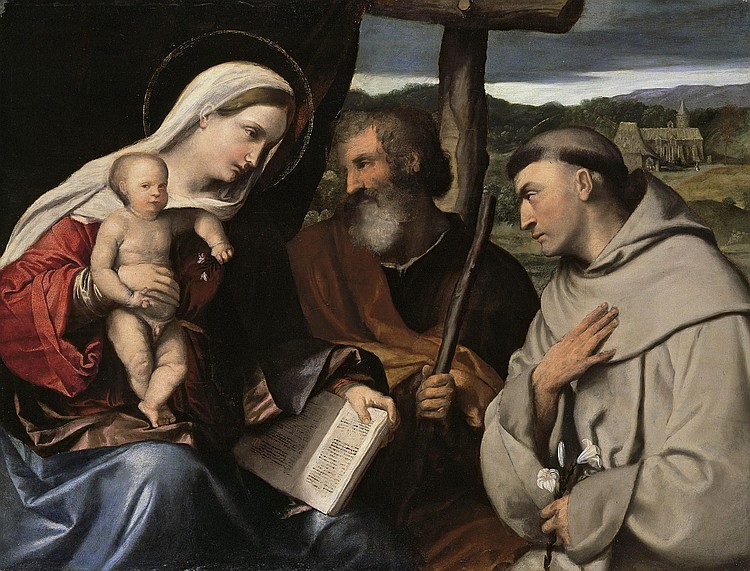 THE PROPERTY OF A GENTLEMAN
No VAT will be charged on the hammer price, but VAT at 17.5% will be added to the buyer's premium which is invoiced on a VAT inclusive basis.
When this picture appeared on the art market in 1978 it was attributed to the School of Lorenzo Lotto, yet it was soon recognised as an important addition to the oeuvre of Brescia's foremost painter of the 16th century, Alessandro Bonvicino, called Moretto. According to Andrea Bayer it represents one of the artist's 'most successful private devotional works' (op. cit., p. 123), and he dates it to the period c. 1522-1526, when Moretto had achieved a highly individual balance between the two main influences on his artistic style, namely Venice and Milan. The position of his home town, Brescia, midway between these two great artistic centres, meant that the young Moretto, along with his fellow Brescian and near contemporary Girolamo Romanino, would naturally seek inspiration from both the Venetian and Lombard traditions. This cross-fertilisation took their art in different directions, producing in the work of Moretto a distinctive and harmonious style, combining Venetian flair and invention with Lombard concern for realism.

In this intimate devotional scene, Moretto places the figures close to the picture plane, in three-quarter-length, with the Virgin seated on the left before a cloth of honour draped over a rough wooden armature, the right edge of which forms a cross, in anticipation of Christ's fate. She holds a book in her left hand and the nearby Saints Joseph and Anthony gaze intently at the Christ Child as he stands on His mother's lap. The figures are set against a rural landscape with a rustic church and mountains in the distance. The composition is typically Venetian and in several respects recalls Titian's Averoldi altarpiece for the church of S.S. Nazaro e Celso in Brescia, that was in situ by 1522, and which exerted a powerful influence on Brescian artists of this period including Moretto. Here the pose of Saint Anthony seems to have been inspired by Titian's figure of the Virgin Annunciate; both place their right hand delicately against their chest, with a similar fall to the robe as it drapes over the arm, while both heads are seen in profile. Elsewhere the folds in the Virgin's drapery in Moretto's picture closely resemble those described in Titian's figure of Gabriel. Another work by Titian, the Pesaro altarpiece, commissioned in 1519, but not placed on its altar in the Frari, Venice until 1526, may also have informed certain aspects of Moretto's work, particularly the pose of the Christ Child, and the original position of Saint Anthony's head, which was intially conceived as gazing upwards; although unlike the Averoldi altarpiece, it is unclear where Moretto may have encountered this work (see ibid., pp. 125-6).

If the general composition and details of the poses in the present work are indebted to Venetian art in general and Titian in particular, other aspects point to the Lombard tradition as the source of inspiration. This would seem to be the case with regard to the pronounced sense of realism to be found in the picture, from the physical presence of the Saints to the roughly-hewn wooden post behind Joseph and the vivid rustic landscape. The colouring of this picture also owes more to Lombardy than to Venice, and the distinctive orange/red of the Virgin's gown and the cool grey/brown of Saint Anthony's habit recur often in Moretto's mature work.

The Holy Family with Saint Anthony of Padua, with its carefully achieved balance of influences and deceptive naturalism, marks the begining of Moretto's full maturity as an artist. Stylistically it can be compared with one of Moretto's most popular works, The Madonna and Child with Saint Jerome (Ashmolean Museum, Oxford; A980), dated between 1530 and 1535. Both works share certain compositional features, such as the position of the Virgin and Child in relation to the adoring Saint, the backdrop of the cloth of honour that is draped over a rough wooden construction and the landscape, which is also similar in both pictures. More particularly the poses of both the Virgin and Saint Jerome in the Ashmolean picture, find close parallels with the Virgin and Saint Anthony in the present work. It is, however, the close observation of the figures and the intensity of their relationship to each other that typify these works and is perhaps one of the most remarkable aspects of Moretto's mature work.