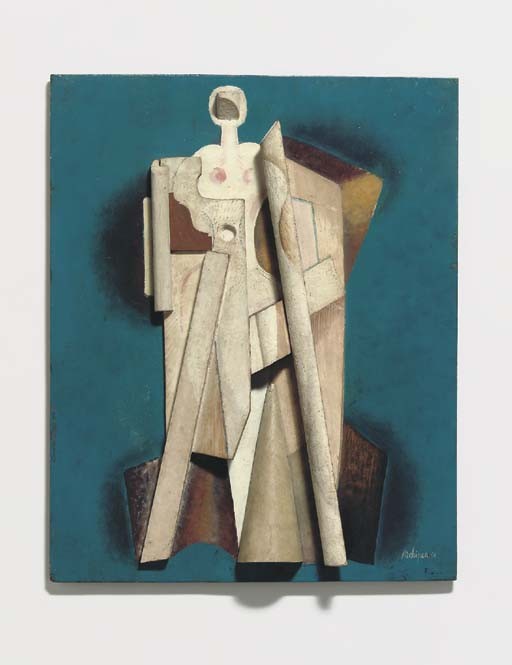 PROPERTY FROM THE ERICH GOERITZ COLLECTION

'Sculpto-painting is not only a renaissance of the vanished tendency to unite form and colour; it is rather a new medium of art, due to a specific conjunction and amalgamation of materials, forms and colours. Aesthetically and technically, sculpto-paintings are entirely different from the coloured reliefs of a la Della Robbia or the Egyptian and Assyrian. The novelty does not lie in the fact that sculpto-paintings are reliefs, but in the fact that stylistically, conceptionally and aesthetically they are new, as a result of entirely new materials and techniques' (A. Archipenko, Archipenko: Fifty Creative Years 1908-1958, New York, 1960, p. 41).

Executed in 1918, at the height of his adventures in sculpto-painting, Woman is an unequivocal masterpiece, within the context of Archipenko's work and within the wider context of the avant-garde of the period. Within months of his arrival in Paris in 1908, Archipenko had become associated with the pioneers of Cubism, and this association was formalised by his inclusion alongside the Cubists in the Salon des Indépendants in 1910. It is a telling reflection of Archipenko's importance to Cubism that in the seminal 1936 exhibition of Cubism and Modern Art in the Museum of Modern Art in New York, Alfred H. Barr, Jr., MoMA's renowned first director, wrote that he was 'the first to work seriously and consistently at the problem of Cubist sculpture' (Alfred H. Barr, Jr., Cubism and Modern Art, exh.cat., New York, 1936, p. 104). This is never clearer than in the sculpto-paintings, which appear as the natural organic heirs of the works of Braque, Picasso and Gris. Here, the verve of the 1910s fills the surface with rhythmical movement, the mechanical shapes and forms of the modern age used to form the sculptured figure of that most classic and enduring of subjects, the woman.

Despite his involvement and exhibitions with Cubism, Archipenko retained a distance from the movement, and it was in fact his close friendship (especially with the Duchamps) with its proponents, rather than his own views, that led to his continued association. Archipenko went beyond Cubism, and this was never more evident than during the final years of the First World War, the period during which Woman was executed. During this period, Archipenko stayed in Nice, at a distance from the frenetic developments that were rampaging through the Parisian art world. Woman is the product of his own solitary research, and while it retains similarities to various other artists' works from the same period, this is a reflection of the times and the shared problems that they all faced. Thus, while there are clear visual similarities between the works of, say, Lipchitz and the three-dimensional collaged still lifes of Picasso (see figs.), Archipenko was treading his own unique path, mingling his experiences with his pioneering contemporaries in Paris with the developments taking place in Constructivism in Russia. In this way, the exploding plasticism of Woman marks a bridge between the Cubism of Picasso and the sculptures of fellow Ukrainian Vladimir Tatlin.

One of the key factors that distinguished both Picasso and Archipenko during this period was a sense of fun, which coupled with their sense of artistic revolution makes many of their works particularly engaging. Where Picasso's Un autre manager of 1917, from the aptly named Parade works, is filled with a jaunty theatricality (appropriate for Diaghilev's show, for which it was made), it also reveals the pure and exuberant relish with which the artist cobbled together his carnivalesque figure from an array of scraps. So too in Archipenko's Woman there is an intense energy, in part harnessed in the criss-crossing forms of the elements that make up the figure, and in part in the liberating ability to create such a complex and complete form from lowly wooden elements. The use of the collage elements remains scandalously cutting-edge in both these works, as does the sense that both artists have greatly enjoyed making a novel and revolutionary form of high art out of simple, even found components. The cobbled together appearance of Woman, with the conical bottom hinting at geometry exercises and the hole for the belly button a witty apostrophe, lends it an even greater dynamism while revealing the artist's own love of art and of creating.

The distance that Archipenko retained from Paris and the other developments of the art world during this period was paralleled by the individual researches that Lipchitz and Picasso were carrying out at the same time, in near seclusion, taking their own art beyond the bounds of their contemporaries. In Archipenko's art in particular, this individual approach paid off, as he was able to combine the intensely modern constructive idiom that he had developed with his unique search for spirituality in art. It is this almost religious quest, rather than the thirst for modern means - although that is more than amply found in Woman - that leads to the interesting similarities between the new Metaphysical works of de Chirico and Carlo Carrà, from the same period (see fig.). These Metafisica works have both a superficial similarity to Woman, with their mannequins in particular, and a deeper spiritual similarity. For in the age of machines and science, these are artists who insisted on continuing to ask the bigger questions about life. While the Metafisica artists chose to do this with their proto-Surreal images of impossible imaginary landscapes, Archipenko believed that the merest act of artistic creation was itself a meditation on Creation. By constructing Woman, he has channelled some of the creative power of the universe, forming out of wood and space the representation of a human. Away from the other artists in Paris, Archipenko managed to consolidate these spiritual, mystical ideas of the role of the artist, and this would fuel him for the rest of his artistic career.

Archipenko's sculpto-paintings were the ultimate forum for an exploration of the potential of sculpture in the post-Cubist art world. Because they are wall reliefs, they take the space, and therefore directly challenge the hegemony of traditional painting. Archipenko attacked this much-taken-for-granted concept as a Gordian Knot: 'Traditionally there was a belief that sculpture begins where material touches space. Thus space was understood as a kind of frame around the mass... Ignoring this tradition, I experimented, using the reverse idea and concluded that sculpture may begin where space is encircled by the material' (Archipenko, op.cit., 1960, p. 56). In Woman, Archipenko has used the framing technique of a painting to harness space, as well as the overlapping elements of the woman herself. There is a strong resonance between the forms of Woman and the Constructivism that was taking increasing hold in Revolutionary Russia. Indeed, the early beginnings of sculpto-painting have led some people to believe that Archipenko's developments in France had a direct influence on the movements in Russia and Ukraine. In his book, Archipenko: Fifty Creative Years 1908-1958, the artist tellingly listed Woman in his 'Constructions' heading, perhaps hinting at this similarity.

This similarity to the Constructivists rather than the Cubists is especially evident in Woman, even in comparison to most of the other sculpto-paintings. For here, Archipenko has foregone the colourism of some of his polychrome sculptures and even of his earlier Woman in Room (lot 32). Instead, he has focused entirely on the power of form, or sculpture, to render something in a supra-pictorial manner. While he has articulated certain parts of Woman with colour and shading, and has importantly left the background a darker colour in order to thrust the relief elements into the viewer's space, he has nonetheless pared down the polychrome elements, preferring instead to explore the rich nuances available through three dimensionality. There is the slightest hint of painterly articulation in the breasts, but for the rest, Archipenko has allowed his sculptural abilities to shine through and to capture the Woman.

It is here, in his deft manipulation of light and form, that the skill and virtuosity of the artist become truly evident, as he unleashes an arsenal of techniques, some incredibly subtle, to this aim. In particular, Archipenko's unique ability to manipulate light and shadow, to almost paint through the simple presence or absence of material, permits him to create in Woman an infinitely nuanced and subtle three-dimensional mock-grisaille, yet there is little 'gris' at work. Instead, there is a lively chiaroscuro that fills the work with life and form:

So Archipenko declared the results of Woman to be superior to Cubism; certainly, in terms of the liveliness of this work, and its ability to draw the eye hither and thither, it is lent an intense sense of movement and energy that is seldom present in painting. It is a tribute to the visual strength of Woman in particular amongst the sculpto-paintings that it survived the translation into two dimensions, as it also formed the basis for one of Archipenko's most successful lithographs. This, alongside its early exhibition history, reveals the artist's own intense satisfaction with this groundbreaking work, while its extended time on show at the Tel Aviv Museum is a tribute to its art historical importance, which itself is sharpened by the rarity of these sculpto-paintings.