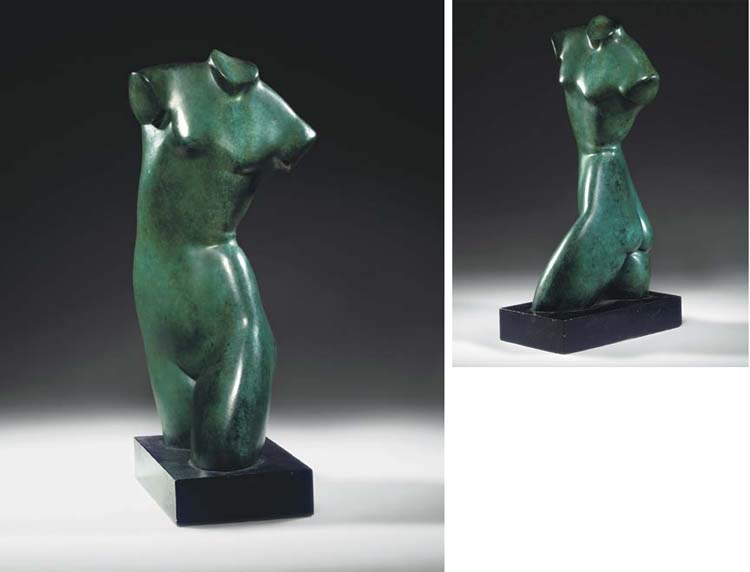 The Archipenko Foundation will include this work in the forthcoming catalogue raisonné of sculptures by Alexander Archipenko.

By the early 1920s Archipenko's reputation as a leading avant-garde sculptor was firmly established. During this period he was honoured with one-man exhibitions in Venice and New York, and was included in numerous group shows throughout Europe and America. His popularity was such that no less than six monographs of his work were published between 1921 and 1924.

While the formative years of Archipenko's career had been spent working in Paris and Nice, it was the progressive environment of Berlin that captured his interest following the First World War. By 1921 Archipenko had moved to Berlin, opened an art school and married the highly regarded expressionist sculptor Angelika Schmitz (a founder member, and only woman, of the Sezession group of Dresden, she exhibited under the name of Gela Forster; 1893-1957). The shift away from Paris was largely the result of his long-standing association with two German patrons, Karl-Ernst Osthaus and Herwarth Walden. Osthaus had organized Archipenko's first large show at the Folkwang Museum in Hagen in 1912 and Walden gave him a one-man exhibition at the Der Sturm Gallery in Berlin in 1913.

Archipenko's work from his years in Berlin is markedly different from that of his French period. Katherine J. Michaelsen notes that, 'Archipenko abandoned his bold, innovative experiments of the previous decade and assumed a mannered naturalistic style', placing a greater emphasis on the female form (exh. cat., Alexander Archipenko, A Centennial Tribute, Washington, D.C., 1986, p. 55). The measured abstraction of the female body and simplification to curvilinear form would occupy the artist more and more throughout the 1920s and 1930s.

'I do not exclude naturalism from my conception of creative art. However, I do eliminate the photographic precision of details which contradicts the expression of some esthetic character which I intend to amplify. For instance, if muscles or bones interfere with the line, I eliminate them in order to obtain simplicity, purity and the expression of stylistic line and form. From such simplification further development evolves in symbolic form and becomes a creative suggestion liberating the object from its ordinary externality. Through such a transformation of naturalism, step by step, I approach the metaphysical and spiritual realm where creative expansion has no limit' (Archipenko, quoted in A. Archipenko et al, op. cit., p. 48).

A highly lyrical and sensuous work, Torse tournant demonstrates Archipenko's desire for simplification in order to highlight the beauty of the female form. The torsion that he creates in her simple movement invites the viewer to see the sculpture from all sides, addressing his concern regarding the amplification of the frontality of a three dimensional sculpture (see A. Archipenko et al, op. cit., p. 47). The work was originally executed in 1921 and Archipenko produced several marble versions, one of which is housed in the Phildelphia Museum of Art. There are two bronze editions of Torse tournant; the first cast in the 1950s in a numbered edition of six, to which the present work belongs, and the second, larger size, cast in the 1960s in an edition of nine, several of which were cast posthumously after 1964. Other examples from the 1950s edition are in the collections of the Museum Folkwang in Essen, the Walker Art Centre in Minneapolis and the Winnipeg Art Gallery. This work is presented for sale on its original base.