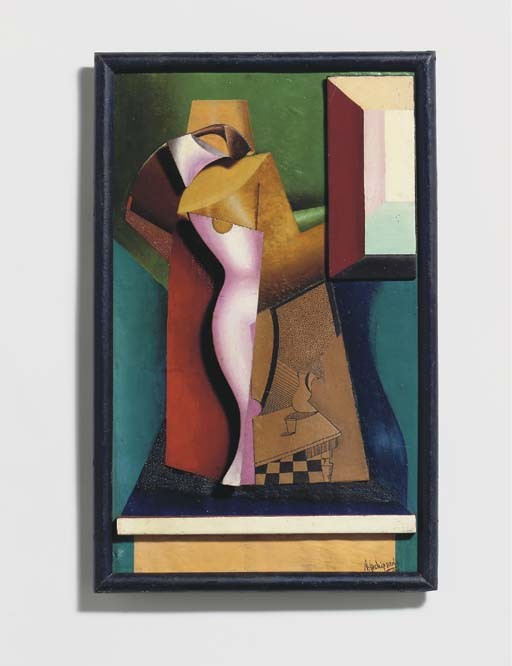 (Probably) Sally G. Falk, Geneva.
Erich Goeritz, Berlin by whom acquired from the artist before 1933 and thence by descent to the present owner.

PROPERTY FROM THE GOERITZ COLLECTION, BERLIN

Executed in 1917, Woman in Room belongs to the rare and important group of mature sculpto-paintings Archipenko executed in Nice during the war years. The earliest of these were begun just before the outbreak of war. In 1914, Archipenko had exhibited his superb Médrano II mixed media construction at the Salon des Indépendants alongside the Cubists and the piece was met with equal measures of derision and acclaim. It was in support of Archipenko during this exhibition that Guillaume Apollinaire wrote his celebrated defence of Archipenko's avant-gardism:
"One [of Archipenko's sculptures] is made of different materials - glass, zinc, wood - all polychromed. It represents a very great effort to go beyond the conventional in sculpture. Those of my colleagues who are so certain they possess the ultimate truth in aesthetics have, of course, the right not to mention such a surprising work, executed with such ease and grace. As for me, I am happy to say how delighted I was at the sight of such a delicate work."
Médrano II was bought by the Italian avant-gardist Alberto Magrelli from whose collection it was purchased by the Guggenheim Museum, New York in the 1950s.
Keen to establish his own three-dimensional form of Cubism Archipenko, along with Laurens and Lipschitz, began to create complex reliefs and sculptures in which the sculptural figures were set in their own surroundings. Complementing the complexity of these compositions was a passion for vibrant colour and dissonant primaries very much in keeping with the work of both Picasso and Gris between 1915 and 1917. Fortunately, a small but precious group of these astonishing and delicate sculpto-paintings survive and several housed in major institutions today are illustrated here (figs X - Y). Between 1914, the documented date of the first sculpto-painting (Woman with Fan: fig ---) and the early 1920s, Archipenko made some forty sculpto-paintings of which only about half have survived. Many have their own unique condition problems. Some like Woman with Fan have been badly damaged and restored with reference to contemporary photographs. The present piece, Woman in Room, did not escape unscathed: the Tel Aviv museum catalogue records that the small head element of the woman was badly damaged and has been replaced by a perfect copy.
In her excellent introduction to the exhibition catalogue 'Alexander Archipenko. A Centennial Tribute', Katherine Michaelsen explains Archipenko's conviction that these sculpto-paintings are the most significant works in his oeuvre:
"In his essay printed in the German exhibition catalogue (1922), Archipenko refers to sculpto-painting as his most important work. He explains:
Take for example the sculpto-painting Bathers [1915]. Here I rendered the shape of a figure stepping out of the water with a column nearby. The form is yellow, the water is blue. How absurd it would have been if I had attempted to carve the colour of the water and the colour of the figure. Naturally I have to paint. I have tried representing a form that does not have colour and I have found none. Do you know a form that has shape and that does not at the same time have colour? For me sculpto-painting is not only something logical, but it is absolute truth. If I were a Futurist I would say that every sculpture in bronze, marble, wood, that any sculpture in a single material is a lie."
(Washington, 1986, p.39-40).