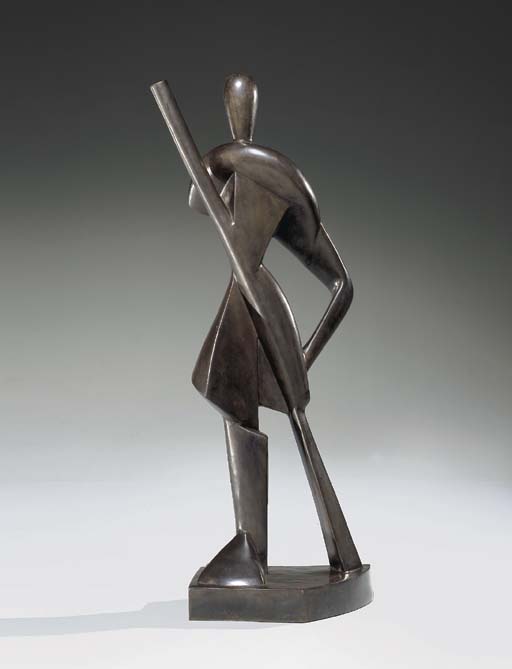 Perls Galleries, New York.
The Times Mirror Company, London, by whom acquired from the above in April 1973; sale, Christie's, New York, 12 May 1998, lot 10.
Acquired at the above sale by the present owner.

The Archipenko Foundation will include this work in their forthcoming Alexander Archipenko sculpture catalogue raisonné.

Archipenko's 1914 sculpture Gondolier was a landmark in his art, and in the development of Cubism itself. Filled with grace and movement, this is an icon of the avant-garde and marks the extent to which Archipenko truly succeeded in creating a sculptural idiom for Cubism. Indeed, in the seminal 1936 exhibition of Cubism and Modern Art in the Museum of Modern Art in New York, Alfred H. Barr, Jr., MoMA's legendary trailblazing first director, wrote that Archipenko was 'the first to work seriously and consistently at the problem of Cubist sculpture' (Alfred H. Barr, Jr., Cubism and Modern Art, exh.cat., New York, 1936, p. 104).
Gondolier has always been considered one of Archipenko's most successful sculptures, not least by the artist himself, and casts of it figure in the collections of the Hirshorn, MoMA and several other museums. Almost every significant Archipenko exhibition has endeavoured to include a cast of this crucial work.
In Gondolier, the artist manages to reduce the figure to a small number of geometrical shapes, each almost abstract in its own right and yet coming together to give not only the image, but to capture the graceful gondolier in motion. The process of reduction that he has used has resulted in the gondolier's pole and one leg being fused into one form, a representation that results in a dynamic visual simplicity. In tackling what he termed the 'geometrization' of forms in the post-Cézanne era, Archipenko looked at sculpture and realized that its plastic nature gave it infinite possibilities, not limitations. His innovative use of space and light as a sculptural equivalent to the planes in painting added an extra dimension to the paring down of the forms. In Gondolier, we see that the shapes are displayed in such a way as to create absorbing contrasts between the various elements, light, shadow and space providing him with a sculptural palette as expressive as any colours. Likewise, the gleaming edges heighten the sense of a central geometric imperative at work in the sculpture.
This marked a revelatory new development at the cutting edge of the art scene at the time. During that period, Guillaume Apollinaire, whom Archipenko considered one of the two 'first writers and defenders of modern art' (A. Archipenko, Archipenko: Fifty Creative Years 1908-1958, New York, 1960, pp. 48-50; the other was Herwarth Walden), wrote about the sculptor for an exhibition in the Galerie Der Sturm in Berlin, and when Gondolier was exhibited in the 1914 Salon des Indépendants, Apollinaire's writings on the sculptor were used again. However Gondolier became the focus of lampooning as well as praise: a cartoon took the sculpture's X-shape to a new extreme in order to mock it, describing it as a weather vane for a factory chimney from a Venetian bazaar. Meanwhile, a poem about the Salon included several verses dedicated to this 'sorte de bonhomme', claiming that the artist's vision had to be a joke.
This interest in technology lies behind Archipenko's choice of subject matter as well as style. The gondolier is a figure in motion, but also at work. His profession makes him an elegant human machine, propelling his gondola ever forwards. This presents the artist with an intriguing subject from the point of view of the tensions of the body in motion, the posture and the stylized musculature. It also marks the fusion of man and action, man and work, resulting in a manner of automaton, a subject that would come to feature more and more often in Archipenko's sculpture and whose currency in the wider art world of the time is evident in the sculptures of other artists, not least Epstein, whose iconic Rock-Drill dated from the same period. For what could be more modern than action and movement in the world of the Futurists? What could be more noble than work in the world of the revolutionaries? Archipenko's Gondolier comes from the cutting edge of more than art: it is also from the cutting edge of the philosophy and politics of its age. That this modernity is here contained in the timeless figure of a gondolier adds to the strength of the work. This paradox and Archipenko's ability to overcome it were described by Apollinaire in his introduction to the artist's Der Sturm exhibition catalogue:
'Stupidity and ignorance will always allege that the tango and the bunny-hug are less aesthetic than traditional dances, even though they do embody in themselves the whole tradition they oppose' (Apollinaire, quoted in Archipenko: International Visionary, Washington, D.C., 1969, p. 12).
Just as Archipenko's relationship with tradition was complex, so was his relationship with Cubism. Although he accepted that he was in many ways related to the Cubists, he believed that they shared common ground but that he himself was at a distance from them, that his imperatives were different. Despite sharing the common language of 'geometrization' and despite his work taking Cubism as its own foundations, Archipenko had reached a deeper understanding of the sculptural possibilities of modern art:
'As for my own work, the geometric character of three-dimensional sculptures, Boxers, 1913, Silhouette, 1910, Gondolier, 1914, is due to the extreme simplification of form and not to Cubist dogma. I did not take from Cubism, but added to it. At this time no other sculptor reduced forms to their fundamentally geometric structure' (Archipenko, op.cit., 1960, p. 49).