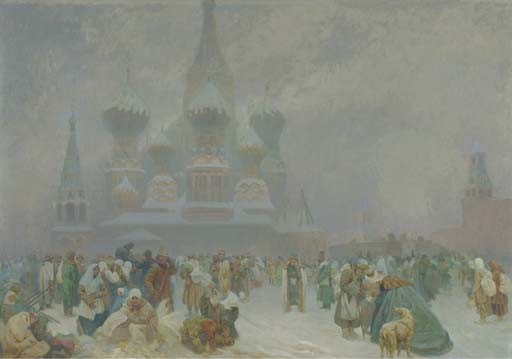 Alphonse Maria Mucha is most often remembered for the prominent role he played in shaping the aesthetics of French Art Nouveau at the turn of the Century. As a struggling and relatively unknown artist of Czech origin living in Paris, Mucha achieved immediate fame when, in December 1894, he accepted a commission to create a poster for one of the greatest actresses of this time, Sarah Bernhardt. Though the printer was apprehensive about submitting Mucha's final design because of its new unconventional style, Bernhardt loved it and so did the public. Le style Mucha, as Art Nouveau was known in its earliest days, was born. The success of that first poster resulted in a 6 year contract between Bernhardt and Mucha and in the following years his work for her and others included costumes and stage decorations, designs for magazines and book covers, jewellery and furniture and numerous posters. Of the numerous oils and sketches that Mucha painted of Sarah Bernhardt, one in particular foreshadows Mucha's later style (fig. 1). In this piece from 1897 Sarah Bernhardt directly engages the viewer's gaze. This powerful handling of the female gaze returns in Mucha's work in The Slav Epic, the most notable two being in The Festival of Svantovit and The Abolition of Serfdom in Russia, 1861 (fig. 2 and 3).

Alphonse Mucha originally conceived the idea of creating The Slav Epic in 1900, from his experience working on the Bosnian Pavilion at the time of the World Fair in Paris. In 1910 he and his family returned from their long-term stay in France and the United States to Bohemia. In his 50's Mucha started painting the first canvases in the Castle of Zbiroh, outside Prague. It took a further 18 years for him to create all the canvases. During this long period of time, which includes the devastation of the first world war, Mucha's patron and friend was Charles R. Crane. The well documented agreement between Mucha and Crane was that each year Mucha would produce three paintings for the series, which Crane would pay for and the works would be gifted to the city of Prague, yet remain in Mucha's studio until the completion of the entire series. Numerous letters of Mucha to Crane survive documenting details of payment for the panels of The Slave Epic (Columbia University Library, Rare Books and Manuscripts Library, The Bakhmeteff Archive of Russian and East European History and Culture, The Crane Family Papers, Box 15). Through the years, Crane kept his involvement with the creation of the epic strictly on the financial side and Mucha had complete artistic liberty.

The Slav Epic consists of 20 monumental paintings expressing scenes from Czech national history and the history of the other Slav nations. This monumental work remains a tribute to the profound spirit, history and mythology of the Slavic people (fig. 4). The major themes of the epic can be summed up as the celebration of Slavic love of peace, piety and learning; the lamentation of the interference of foreign oppressors and the wars they bring; and pleas for Slavic unity, which finds expression in Slavic liturgy and religion.

The Abolition of Serfdom in Russia, 1861, arguably the most famous of all the panels in the epic, depicts a tremendous turning point in Slavic history: the end to the thousand year darkness in which the nation was entombed and the moment of its awakening. This specific panel among all others in the epic is particularly moving in its depiction of a moment in time that touches the hearts of all Slavic peoples.

In 1913, while planning his composition for The Abolition of Serfdom in Russia (1861), Mucha to Russia and took many photographs some of which he used to assist him in the work. Mucha may also have been inspired by Surikov's painting entitled The Morning of the Streltsi Execution (fig. 5). In both works the placement and dominant nature of St. Basil's cathedral in the background is noteworthy. The strong presence of this liturgical edifice in the composition serves as a recognition of the importance of religion as a unifying factor in the lives of the Slavic people.

In painting the epic, Mucha used a technique which was probably based on his experience of scene painting with Brioschi-Kautsky in Vienna, and which he improved on as the work progressed. First he worked out the composition in a small sketch, until he was satisfied with the arrangement of figures and space. Then he made a larger sketch, about 60 x 40 cm., to test the colors. These were often entirely impressionistic studies, without any figural detail. Then he did a minutely detailed drawing of the same size in pen and watercolor. He then fixed strips of tracing paper on the prepared canvas, and by using a grid enlarged the whole picture from the sketch to its proper size. The entire drawing in charcoal on tracing paper was then taken down, perforated, and traced onto the canvas. Then, using the colored sketch as a guide, the whole picture was undercoated with the principle colors. The drawing was traced on again, and only then Mucha would begin on the details of the painting. All the undercoating was done in tempera, and the details were finished in oils.

John Mucha has recently pointed out the existence of the following reduced versions from the epic which are all in the collection of the Mucha Foundation. There exist four reduced versions of panels from The Slavic Epic done in oil in significantly smaller dimensions and are more impressionistic in their execution then the present lot. These smaller works each measure 38 x 45 cm. and they are reductions of the following panels: The Slavs in their Original Homeland, The introduction of the Slavonic Liturgy, Printing of the Kralice Bible at Ivancice and The Oath of the Omladina under the Slavic Linden Tree. In addition, there is also a smaller pen and watercolor study of The Abolition of Serfdom in Russia, 1861 which measures 30 x 38.5 cm. as well as a number of sketches.

On 4 September 1928, Charles R. Crane received a letter from the Board of Directors of the Prague International Fair inviting him to join the Honorary Committee for the exhibition of The Slav Epic (fig. ??). The exhibition of the epic opened at the Fair Palace in Prague on 21 September 1928 to much fanfare, and there it was donated to the Czech people.

On a letter dated 26 January 1938, addressed to Charles R. Crane, the mayor of Prague, Dr. Petr Zenkl states that The Slavic Epic 'does not suffer from the present location and that the question of a definite one is a permanent subject of attention and consideration of the cultural and educational section of the City of Prague'. Crane ontinued to be concerned with the exhibition conditions of the epic and wanted to secure a permanent home for it. After second World War The Slav Epic was taken to the town of Moravsky Krumlov. There, in the Castle of Moravsky Krumlov, the cycle has been exhibited since 1963.

We are grateful to John Mucha for his assistance in preparing this catalogue entry.

Property from the Estate of Ambassador Charles R. Crane