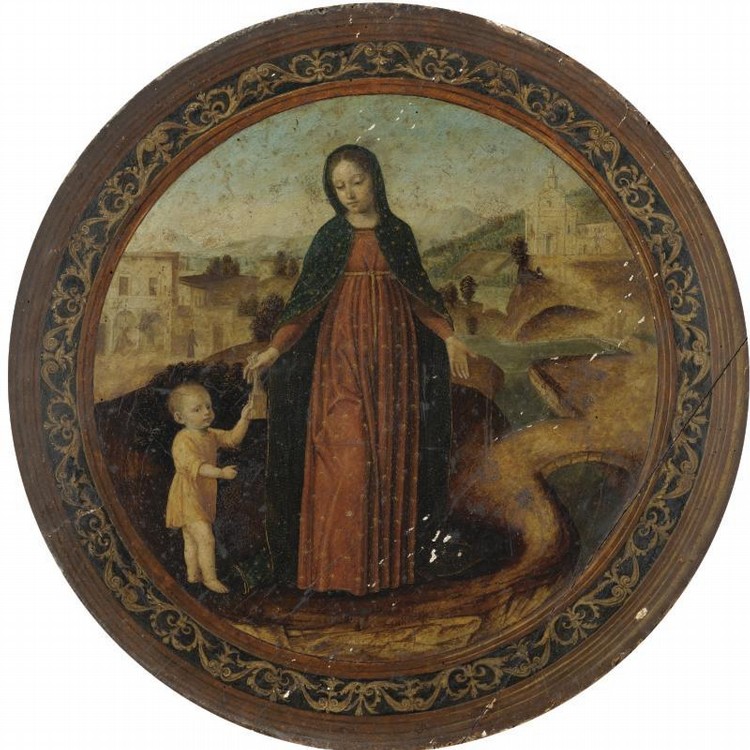 THE VIRGIN AND CHILD IN A LANDSCAPE

oil on panel, circular, with a trompe l'oeil decorative border and within an integral frame
the reverse carved with radiating grooves, partially punched in gold leaf

Until the large monographic show on the artist in 1998, Bergognone was little known outside of Lombardy and he was perhaps remembered most for his activity at the Certosa di Pavia. He was, in fact, an extremely versatile artist who produced small devotional panels for private patrons, large altarpieces for churches, frescoes in the Certosa, and cartoons for the wooden intarsia of the choir in the same church. It is perhaps in small-scale easel paintings such as this one, however, that Bergognone's quiet tenderness and deep religious feeling is best interpreted.

The figures of the Madonna and Christ Child are typical of Bergognone and find parallels in a number of other works by him: the Christ Child resembles that in the painting of The Madonna and Child with Saint Catherine of Siena and a donor in the Pinacoteca di Brera, Milan, datable to the second half of the 1480s,υ1 and the Madonna is just like that in The Adoration of the Christ Child in the Fondazione Berenson, Villa I Tatti, Settignano, where she wears a similar dark blue cloak decorated with gold stars.υ2 The style of the Tatti panel and this painting both recall that of Bergognone's master Vincenzo Foppa and, given that the Tatti painting is generally considered to be amongst Bergognone's first works, the latter is also likely to have been painted early in his career, that is circa 1475-1485. The Tatti painting has a similar background, with stick-like figures visible in the distance, and it too is painted on a small scale, almost certainly for private devotion. Bergognone, like his contemporaries in Umbria or Tuscany, liked to give detail to his landscape backgrounds and he often depicts churches or monasteries with monks wandering around their daily business: compare, for example, his Madonna and Child before a Parapet in the National Gallery, London, datable to circa 1490.υ3

This painting is particularly interesting for its rare iconography and its highly unusual format, not only in Bergognone's own work but in Milanese Quattrocento painting in general. The Madonna passes the Christ Child a small bag, in which there appears to be a small book (presumably the Bible or the Gospels). The book is traditionally thought to have represented the 'Libro della Sapienza' (Book of Wisdom) which prophesied Christ's coming, His Passion and Resurrection. The painting's form is unique in Bergognone's oeuvre. Circular panels on this scale were normally produced as deschi da parto (or 'birth trays') but this was principally a Tuscan tradition, not a Lombard one. The panel was clearly intended to be seen from both sides: its decorative border and integral frame, as well as the elaborate carving and punchwork on the reverse, both suggest it was to be viewed and admired front and back. Indeed the painting was intended as a birth tray, its subject and iconography were aptly chosen: a mother, shown passing her wisdom on to her child, and this is no less than 'Mater Sapientiae', the mother of God. The fact that the carving, punchwork and gilding stops in an area of the verso might indicate that this is where the tray would have been held (the grooves would have made it difficult to carry). Furthermore the superficial damages and scratches to the painted surface are characteristics often found on cassoni (chests) and deschi, largely due to their practical function within a household and the fact that they would have been handled frequently.

The attribution to Bergognone has been endorsed by Everett Fahy.