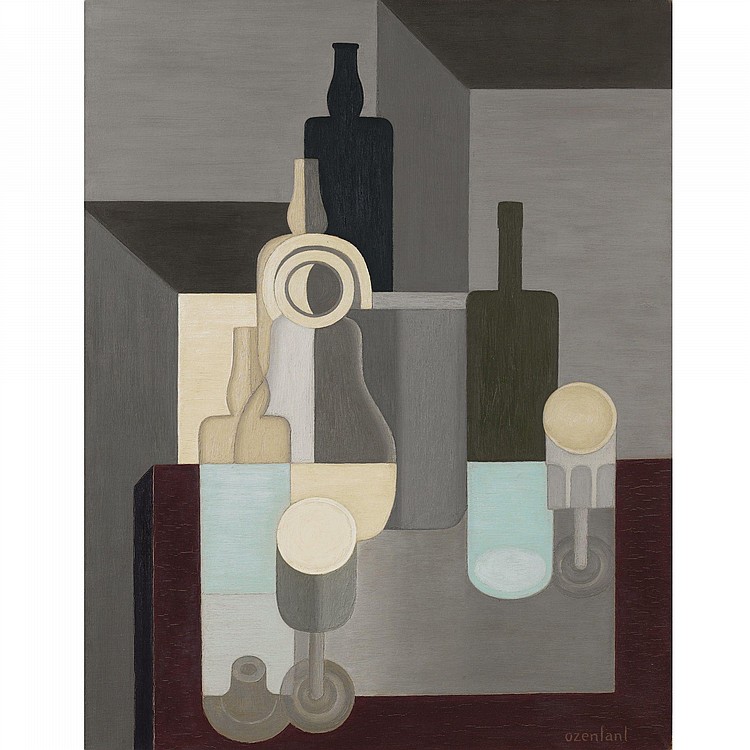 Private Collection, Europe (possibly acquired directly from the artist)
Acquired from the above by the present owner

Painted circa 1924 the present work Nature morte en gris à la bouteille vert by the master of Purism, Amédée Ozenfant, is a tour de force of pared down, elegant perfection. One of the key artistic minds of the period, Ozenfant understood that to truly embrace the modernism of contemporary painting he had to pay close attention to the outstanding work of the architects and engineers of the International Modern. The genius of Walter Gropius and J.P. Oud was key to his understanding of geometry in painting and with it achieving his ideals of balance and composition. A keen student of architecture himself, Ozenfant would not have been the artist he became without the outstanding contribution of his great friend, another architect, Charles-Edouard Jeanneret-Gris (later Le Corbusier), who helped transform his paintings into the clean, pure icons they became.

Ozenfant initially studied in St Quentin before travelling to Paris in 1905 to study architecture and painting. He met Jeanneret-Gris in 1918 and they shared the same passions; not only for painting but also for the art of architecture and with it the extraordinary influence of modernity on contemporary life. In 1918 Ozenfant and Jeanneret-Gris founded the post-Cubist movement of Purism, of which the present work is an exceptional example. The clean lines of the composition, perfectly controlled and balanced, exude an elegance typical not only of the movement but also of the period, where 1920s and 1930s colours and forms were synonymous with the clean black and white of the nautical age and its vital influence on art deco design.

Yet Ozenfant's art is far more to the eye than solely design. He was to change the idea of Cubism being an intellectual-only paradigm. He opened up the language of Cubism and the vernacular of 'flattened form' and 'shallow-plane art' to a wider audience. The present work is a picture of exceptional quality and rarity and is among his greatest works. Executed at the very height of his powers, Nature morte en gris à la bouteille, exudes the stunning confidence and beauty of both Ozenfants' art and the age in which he worked.

'This approach to artistic language is the expression of a particularly sharp view, in the sense that Ozenfant's outlook was drawn to forms in which he found the answer to his search for purity, which he associated with the timeless and universal nature of structural invariants. Taking scientific references and pedagogical techniques as a starting point, Ozenfant's project goes further than rationalism, which he considered insufficient.' (Pierre Guenegan, op. cit. p. 53)Fig. 1, Amédée Ozenfant, Le Pichet Blanc, circa 1926, oil on canvas. Sold: Sotheby's, London, 26th June 2008, lot 386