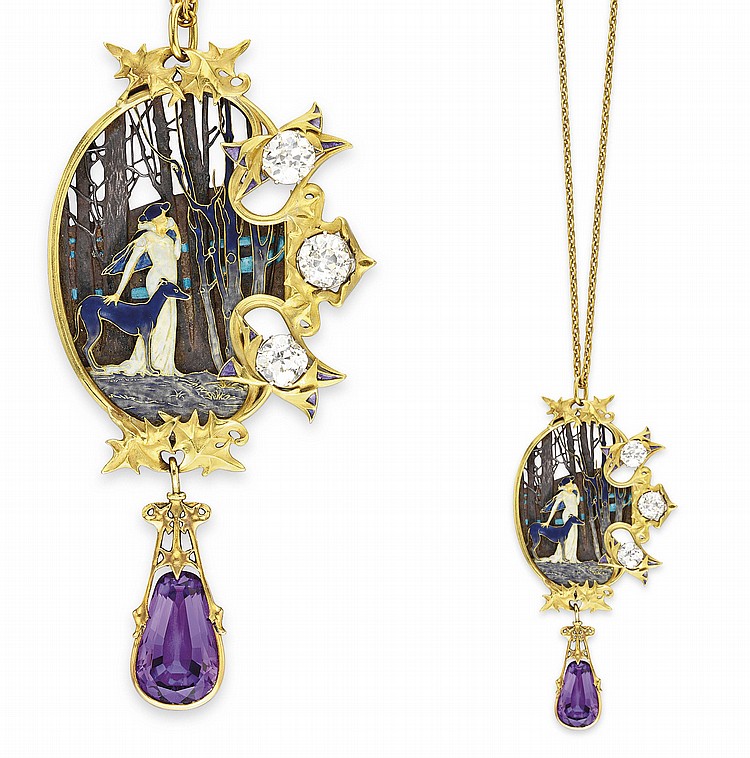 AN ART NOUVEAU MULTI-GEM AND ENAMEL PENDANT NECKLACE, BY RENE LALIQUE
The openwork oval-shaped enamel pendant, depicting Sarah Bernhardt as Mélissande in La Princesse Lointaine, walking through the woods with her dog, within a sculpted 18k gold leaf frame, set along one side with three old European-cut diamonds, suspending a drop-shaped amethyst, within a sculpted gold surround, to the gold fine link neckchain, mounted in 18k gold, circa 1898, 24 ins., with French assay mark, in a Lalique green leather fitted case; accompanied by a beige leather-bound copy of the script of La Princesse Lointaine, a gift to Sarah Bernhardt from Edmond Rostand, the front decorated with a gold and silver-topped gold lily stalk, the blossoms set with rose-cut diamonds and cabochon citrines, the sculpted gold foliate clasp set with garnets, peridots, tourmalines and amethyst, mounted in gold, 1895, 5½ x 8 ins., in an Edmond Rostand black leather case
Pendant signed Lalique for René Lalique, script signed by Edmond Rostand

Not merely a living legend as an actress, Sarah Bernhardt (1844-1923) was also a modern, liberated woman who was an inspiration for the worlds of fashion, the decorative arts and the aesthetic of Art Nouveau. A performer of genius and a multitalented writer, painter and sculptor, she was one of the most brilliant women of her age.

After making her debut at the Conservatoire, Bernhardt's stage career began in 1862, largly in comic theatre and burlesque while she was a student at the Comédie-Franaise, France's most prestigious theatre. She rapidly established a career that was as eclectic as it was successful, excelling in tragedies such as La Dame aux Camélias, triumphing in romantic theatre such as Hernani and Ruy Blas, and winning renown for her male roles in Hamlet, Lorenzaccio and L'Aiglon, written by her friend Edmond Rostand.

Edmond Rostand was also the author of La Princesse Lointaine, written in 1865, his second play which retold the story of the troubadour, Jaufre Rudel who died of love for the Princess of Tripoli, Mélissande. Bernhardt created and starred as Mélissande. He gave Sarah Bernhardt a copy of the text bound in beige leather with a diamond and citrine lily on the cover. The lily echoed the crown she wore in the play. The binding has a scrolling clasp of garnets, peridots, tourmalines, rose-cut diamonds and a cabochon amethyst. These unusual stones were chosen for their muted colors, popular in the late nineteenth century. Bernhardt's motto, "Quand Même" ("In Spite Of"), encloses her entwined initials in gold letters on the back. Rostand showed his devotion to her in a dedicatory poem, handwritten on the front page of the book.

In the course of Sarah Bernhardt's long career, she built up a substantial jewelry collection. She bought pieces in Paris and also collected objects on her international tours. Though her vast jewelry collection encompassed a wide range of styles, Bernhardt is mostly remembered for her influence on Art Nouveau jewelry.

René Lalique began his career as an apprentice to the Parisian jeweller Aucoc, whom Dumas had chosen to be his heroine, Marguerite Gautier's, special jeweler. In turn, Lalique, with his feel for dramatic jewelry, attracted the attention of Bernhardt, who later played Marguerite. For the 1894 production of Theodora, Lalique made Bernhardt a magnificent crown with snakes, griffins, and shoulder-length handing beads. For La Princesse Lointaine, in 1895, Lalique is believed to have made Bernhardt's crown and sapphire ring. He also created this enamel and gold pendant necklace depicting Mélissande, the character Bernhardt played, with her dog, which is set with diamonds and a pear-shaped amethyst drop.

The Art Nouveau period introduced a brief but remarkably fashionable style from the early 1890s to about 1910 which captured the moral and artistic freedom of the day. Art Nouveau designers embraced romanticism, naturalism, and femininity, creating emotive pieces of great harmony and beauty. René Lalique's technical innovations and flamboyant artistry designate him as one of the most celebrated Art Nouveau jewelers and certainly one of the most venerated French jewelers of all time.