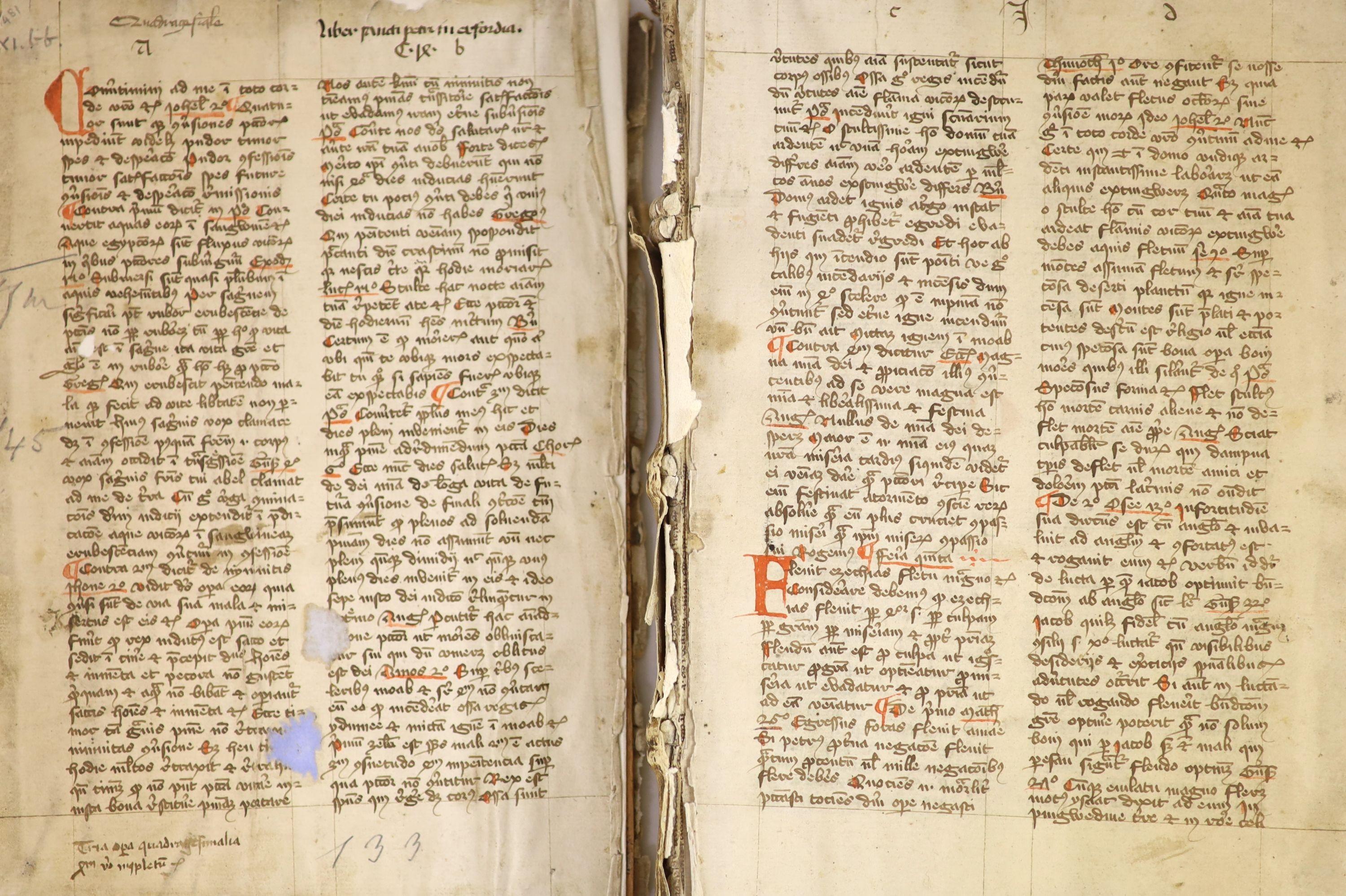 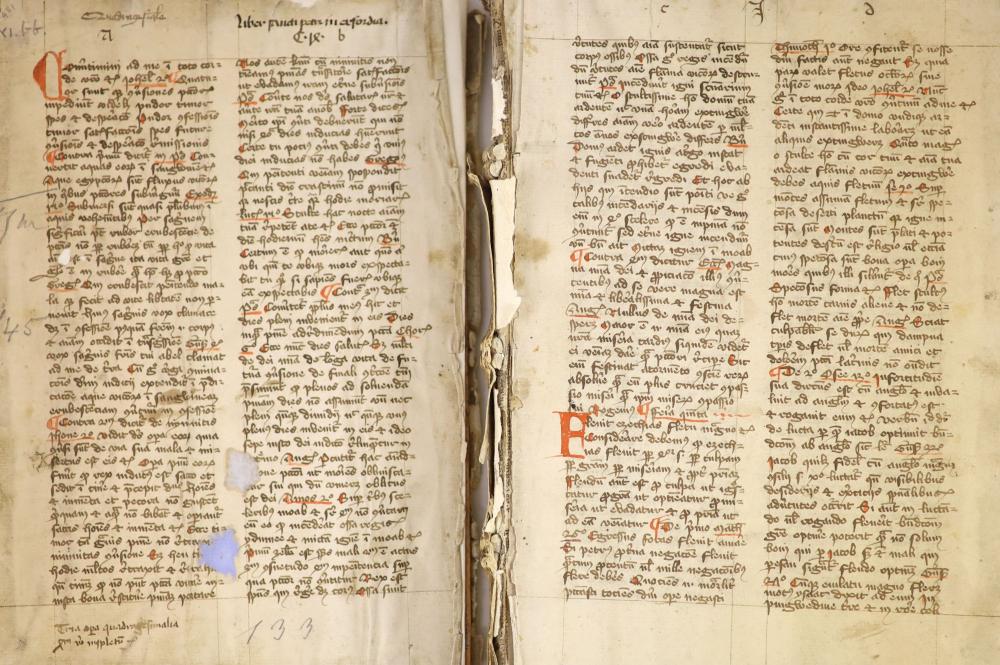 ° An early 15th century German manuscript volume of Lenten sermons, c1400.
The volume consists of 134 foliated and three unfoliated paper leaves, 29 x 20cms. in a parchment binding, from which five metal bosses have been removed [1]. The text is written in two columns, and the four columns visible at each opening are identified with the lower-case letters a, b, c and d [2]. With the exception of folio 134, the text is rubricated, a process largely confined to initial capitals, biblical sources and the days of the week on which each sermon is to be delivered [3].
The watermark of an ox's head surmounted by a flower [4] resembles Briquet 14743 [5, 6, 7], an example of which has been identified from a manuscript at Würzburg dated 1403.[1]
The contents are as follows:
Folios
1-30 Lenten sermons, signed Explicit per manus Heynrici Kothewicz Anno Domini Mo CCCCo primo 3a post Martini – completed by the hand of Heinrich Kothewicz in the year 1401 on the third [?Sunday] after St Martin [27 Nov 1401] [8].
31 blank
32-115 Lenten sermons
116-133 Lenten sermons of Jacobus de Varagine, marked incomplete
134 (reversed) single leaf identified as de Sancto Vito
unfoliated index, dated Anno Domini 1481 [9]
The sequence of the volume's creation begins with three unbound and unfoliated groups of sermons, represented by folios 1-133 and written within a decade of the element dated to 1401. In 1481, to enable the compilation of the index, foliation in Arabic numerals was applied to the recto of each leaf and the letters a, b, c and d to each column. It was probably at that date that the paper gatherings were bound into covers formed from wooden boards with a parchment cover. Folio 134 [10], which was mistakenly bound in reverse, probably dates from the time of the binding.
The hand which added the folio numbers and the letters to each column inscribed column b of the opening folio liber sancti Petri in Erfordia C.l4 – the book of St Peter in Erfurt [number] 154 [11]
At the same time the lower margin of the same folio was annotated Tria opera quadragesimalia quartum vero incompletum – three Lenten works, a fourth however incomplete [12]
In the binding process two fragments of text were inserted as packing:
1.letter reciting a letter of John [von Fleckenstein], bishop of Worms, to his official concerning a dispute with the dean and chapter of the monastery of St Cyriac at Neuhausen, which can be dated to his episcopate of 1410-1426 [13]
2 Nine lines of rhyming couplets on the theme of hunting, probably a Minnesang Lied (German courtly love poem) [14]

In the 19th century the left margin of the opening leaf was annotated in pencil 55m and 145, the significance of which is unclear, and the lower margin 133, representing the number of folios [2]
In the 20th century the top-left corner of the opening leaf was annotated in pencil 1481 (the date of the index) and XI.bb (probably a shelf-mark).
[1] CM Briquet, Les filigranes, dictionnaire historique des marques du papier dès leur apparition vers 1282 jusqu'en 1600; Amsterdam, The Paper Publication Society (Labarre Foundation), 1968.
Remains of the Benedictine monastery dedicated to St Peter on the Petersberg, outside Erfurt in Thuringia are still extant.
During the Thirty Years' War Erfurt was occupied from 1631 by the troops of Gustav II Adolf of Sweden. The following year the monastery was dissolved, and briefly converted into a protestant monastery in 1633. The buildings were converted to secular use in 1803. Further damage took place in 1813 and 1814 and from 1820 the church was used as a store for flour and military provisions.
Although nothing is known about the provenance of this manuscript, it seems likely that it left the monastery during one of these episodes of military activity.
Gorringe's would like to thank Christopher Whittick, former County Archivist for East Sussex, Drs Susanne Brand and Jens Röhrkasten, Professor of Medieval History in the Department of History at the University of Birmingham, for their assistance in the preparation of this report.

Binding (Parchment over Wooden Boards) Upper board present but detached; the ten bosses (5 to each board, 4 corners and at centre) have been removed, some parchment wear and general discolouring - especially on spine which is torn along joint, also at head and tail; on lower board a small piece missing at fore-edge
Text: The first numbered folio is loose, otherwise the binding is firm. Overll the condition is good, with much of it clean. There are small brown blotches / spots intermittently (no one leaf with attention drawn to it). Often only margins are affected. repairs / tears noted: paper repairs lower margins ff.6,7 & 8; clean tear no loss fol.6 (verso) last 10 lines; fol.112 with short clean tear no loss in lower fore-margin; fol.116 small paper flaw lower fore-margin; ff.116 to end lower corners stain (clear of text) and more markedly from fol.128, i.e. lower margins towards fore-edge. Notes - appear contemp, fol.10 (verso) lower margin, 8 lines; fol. 67 (recto) upper margin, 8 words; fol.73 (recto) long note across lower margin, 11 lines, approx 90 words; fol.91 (recto) 12 word note in lower margin, fol.110 (recto) short note fore-margin; fol.112 (recto) extensive notes in gutter and lower margin (approx. 80 words); note - fol.133 (verso) ruled-up and numbered but blank, the ink varies throughout, from brown to a darker black, fol.134 at end - no red ink, possibly not part of main text; the two unfoliated laves following from an index.
The first leaf (unfoliated) has 3 or 4 later pencilled marks in l.h. margin, also a 7 line contemp. note in lower margin; with a 7 word heavier heading in upper margin.

PLEASE NOTE:- Prospective buyers are strongly advised to examine personally any goods in which they are interested BEFORE the auction takes place. Whilst every care is taken in the accuracy of condition reports, Gorringes provide no other guarantee to the buyer other than in relation to forgeries. Many items are of an age or nature which precludes their being in perfect condition and some descriptions in the catalogue or given by way of condition report make reference to damage and/or restoration. We provide this information for guidance only and will not be held responsible for oversights concerning defects or restoration, nor does a reference to a particular defect imply the absence of any others. Prospective purchasers must accept these reports as genuine efforts by Gorringes or must take other steps to verify condition of lots. If you are unable to open the image file attached to this report, please let us know as soon as possible and we will re-send your images on a separate e-mail.

14. Packing and shipping. Postage and packing can be arranged by the Auctioneers and will be charged at cost of postage/delivery plus an additional charge of £10 for the first lot and £2 for each additional lot. Insurance can be arranged subject to the terms of the carriers, however all packing will be at the purchaser's risk. PLEASE NOTE WE DO NOT SHIP FURNITURE / LONGCASE CLOCKS / OVERMANTELS AND OTHER LARGE / FRAGILE ITEMS OF CERAMICS THIS FALLS AS THE RESPONSIBILITY OF THE SUCCESSFUL BIDDER. SHOULD YOU HAVE ANY DOUBT RE: SHIPPING PLEASE CONTACT BEFORE BIDDING. Please see our shipping disclaimer below:

Whilst Gorringes are happy to pack and arrange postage for most lots purchased it remains the purchasers' responsibility to select the required service and level of insurance.

Parcelforce will not compensate for the loss or damage to any of the following;
Antiques
Items made from precious metal
Watches
Ceramics
Diamonds/precious stones.
Glassware
Jewellery
Stamps
The following shippers/carriers provide a superior insured service; DHL or Alban Shipping (which will incur greater expense).

IT IS STRONGLY ADVISED FOR ALL BIDDERS TO REQUEST A CONDITION REPORT PRIOR TO BIDDING, WE MAKE NO GUARANTEES ABOUT CONDITION ON ANY ITEM WITHOUT REFERENCE TO A PREVIOUSLY REQUESTED CONDITION REPORT.

IT IS STRONGLY ADVISED FOR ALL BIDDERS TO REQUEST A CONDITION REPORT PRIOR TO BIDDING, WE MAKE NO GUARANTEES ABOUT CONDITION ON ANY ITEM WITHOUT REFERENCE TO A PREVIOUSLY REQUESTED CONDITION REPORT.